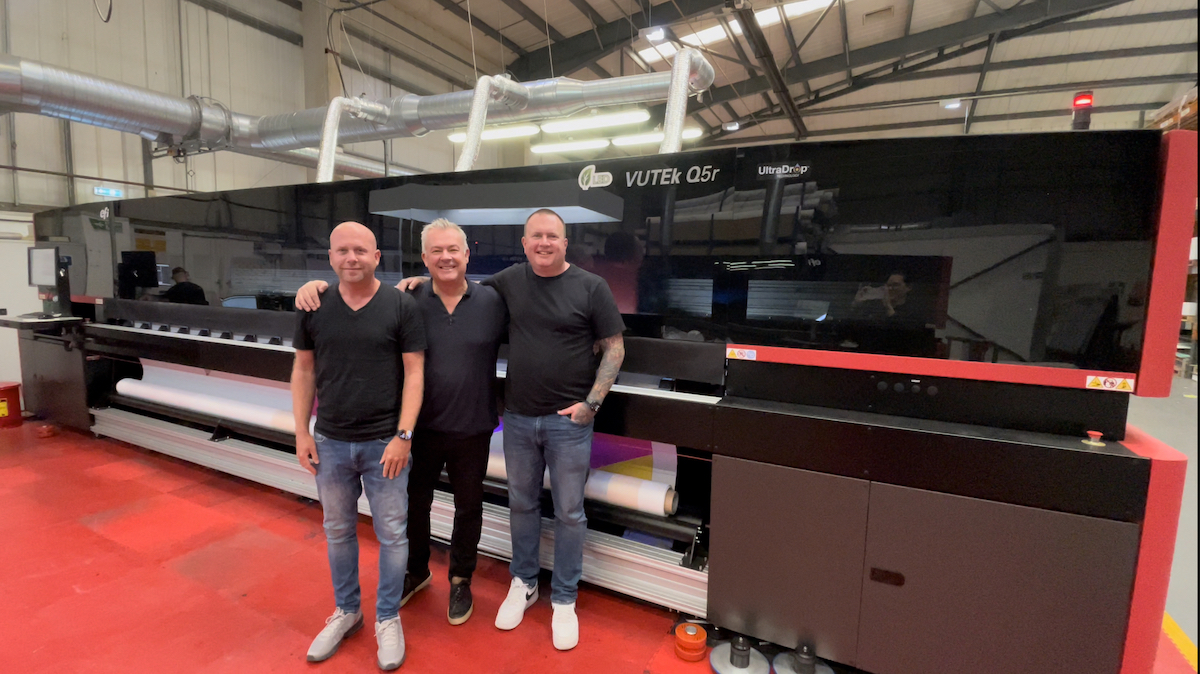 Birmingham-based Hollywood Monster has installed an EFI Vutek Q5r from CMYUK to cope with demand after a record-breaking four months.

“We’re buying total quality, a highly engineered product with a good return on investment that we have maximum faith in,” says Simon McKenzie, CEO, Hollywood Monster.

The need for the purchase is the result of a buoyant order book for 2022 that includes firm commitment from retailers, supermarkets, and a number of large sporting events. To cope with the volume and speed required, Hollywood Monster needed to replace one of its older 5m printers, an EFI Vutek GS5000r that has been a tireless workhorse for a decade.

“The GS5000r has output millions of pounds worth of work, so it’s definitely earned its keep but it’s too slow now,” says Simon.

The Q5r was chosen for its phenomenal industrial printing capacity. “We’ve ordered this printer purely for quality high volume output. We've not added any extras like eight colours or white inks because our HS125 Pros and 5r covers this.  We just wanted a 5m printer to reliably keep pumping out high quality print,” he says.

Hollywood Monster bought its first Vutek printer in 2006 purchasing a QS2000 UV hybrid from CMYUK. Up until this point it had been using NUR and Scitex equipment, but the purchase of the 2m wide QS2000 began a partnership with CMYUK that remains as strong as ever today.

From then to now, Hollywood Monster has remained loyal to EFI, using its technology  to underpin its  business growth.  However, where Simon feels EFI Vutek really made a great leap forward is with the HS125 Pro  3.2m UV LED flatbed and the high-speed roll-to-roll 5m EFI Vutek 5r UV LED, which offers a re-engineered printing algorithm for newly developed white printing modes, increased speed and enhanced quality.

“Like the HS125 Pro and the h5, the Q5r really pushes performance. Compared to the generation of GS machines before, it’s like chalk and cheese. We’re buying the new printer for nearly the same price as we did the old GS but this is more robust, more finely tuned, performs to another level. The price just doesn’t reflect this, it’s very affordable,” he says.

The relationship between Hollywood Monster and CMYUK that began in 2005 has seen both companies grow and transform into leading lights within the wide-format digital printing industry.

“The longstanding partnership that we have with CMYUK has been highly beneficial.  They have always provided excellent impartial advice that has been about our aspirations as a business, but it hasn’t just been about equipment and materials, CMYUK is tops when it comes to finance and supporting customers with the right package. It’s this customer-centric approach that has earned CMYUK such a good reputation. They have never let us down,” says Simon.

As well as CMYUK advising and supplying printer equipment to Hollywood Monster,  both have worked together in promoting and establishing Kavalan PVC-free banner material as a viable replacement to traditional PVC. In the early days of Lockdown, Hollywood Monster was able to take time to extensively test Kavalan in terms of print quality, pull, tear and strength tests to ascertain if it could deliver greener more sustainable solutions to its customer base for when the bounce back happened.

“The move away from traditional PVC has certainly gained huge momentum in the last year or so,” says Simon. “We’re printing way more textiles than we used to for our exhibition customers who would usually use a traditional PVC backdrop. The shift in balance from PVC to non-PVC has been massive, I’d say it’s about 75 per cent.”

In addition to the right technology and the best suppliers, Simon attributes Hollywood success down to hard work and staff dedication. “As a business we have been unrelentingly ambitious, and our priority has always been our clients who trust us 100%. If you look after your customers, they will buy from you and keep coming back.  This central ethos has served us well, enabling us to attract larger clients like McDonalds and the Westfield Group. Bigger clients bought substantial budgets and were matched with our formidable in-house skills and cutting-edge production processes. We just became really assured that we were on the right track, which is where we are today,” he says.

The staff – lifeblood of the business

Hollywood Monster is a family run company. At the helm are three directors, brothers Simon and Andrew McKenzie plus brother-in-law Tim Andrews.  Staff turnover is very low, with the average length of service topping 12.5 years per head, with a number of staff racking up over 20 years.  While continual investment in technology facilitates the work, Simon insists that it’s the production staff that make it all possible, working as one towards a common goal.

The days prior to Lockdown in March 2020 were extremely challenging as the company’s exhibitions and events clients in UK and Europe cancelled jobs, wiping off over £1.5m from the order book. Now safely on the other side, Simon says both himself and his fellow directors were immensely proud of how the staff dealt with those unchartered dark days – something they will never forget.

“During Lockdown, our workforce came into its own producing PPE, safety signage, and floor graphics. Staff had been at home for eight weeks – terrified for their jobs, suffering with their nerves – not to mention their mental health but when we called them back in, they absolutely smashed it. We all did. We produced over £2.5m worth of floor graphics. Who would have foreseen that these printers could have put PPE into offices, travel hubs and the like? It was an amazing use of our equipment, transforming print into an essential service.

“Time and time again our staff just pull it out the bag. They routinely work weekends and never moan. They want to get the job done and they genuinely care about the business. It really is a family here. Spending 50 waking hours plus at work per week, means you see your work colleagues more than you see your loved ones at home,” he says.

Hollywood Monster has now recruited several new staff members in line with its primary focus to retain clients and grow with them. Business has never been so good, and Hollywood wants to ensure that its customer service never loses its edge.

Says Simon, “We want to make sure all our customers feel loved and that there’s nowhere else they want to go. The new staff are dealing with a 20% increase of client spend which equates to about another £1.8 million in sales. We want to continue to stand out from the crowd. We are here 7 days a week and offer a same day service whether that be a Saturday, Sunday, Tuesday or Wednesday. It’s all about trusting that Hollywood Monster can deliver every single time. We're certain that we're talking to the right kind of clients and will grow with them.  This confidence has led us to purchase the new EFI Vutek Q5r, which we believe will help us deliver an even better service.”