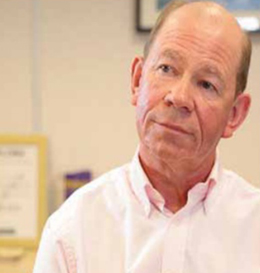 This summer Apex Digital Graphics managing director Bob Usher was elected chairman of Picon, the UK confederation of print industry manufacturers and suppliers. One of his aims is to broaden Picon’s membership, with a focus on attracting more companies from the digital and cross-media sectors.

Given that a key priority for Picon is to ‘increase the effectiveness of the UK print industry’s representations to government and other bodies’he will also working hard with the GPMA, the new print trade association collective headed by previous Picon chairman Peter Morris.

So what role can we expect Picon to play in promoting print as a whole and digital wide-format in particular as we move forward?

To be blunt, Picon means very little to my readers. And those that recognise the name largely think of it as a collective that has little impact, if any, in the wide-format digital print sector. Is that perception fair?

It may well be fair, because maybe Picon hasn’t gone out of its way to really promote what it actually does very effectively in the background.

There used to be an organisation called the APMI (the Association of Printing Machinery Importers) that was funded really by Picon when it owned Ipex. That organisation was made up of a significant number of heavy metal manufacturers from the litho press and finishing area. But when Picon sold the Ipex show in 2006, the APMI and Picon merged to form a new joint council and from then there has been a significant number of companies from the digital sector that have joined the organisation, and I name companies like Agfa, EFI, Screen, Fuji…and many of those are from the wide-format sector.

As new chairman you have a number of objectives, one of which is to attract new members from the digital and cross-media space. How critical is this focused  ‘recruitment’ drive to Picon’s make-up and aims?

Picon, like the industry, needs to continually reinvent itself. The industry itself is rapidly changing and Picon needs to keep apace of that so the attraction of new cross-media and digital partners as the industry evolves is important, otherwise the membership becomes less relevant. We spend a lot of time making sure we’re representative of the front line.

Picon already has a Digital Focus Group, which outsiders tend to know little about. Can you tell us what companies are part of the group and talk us through its remit?

Well Picon has three meetings per annum of the group, chaired by Brian Filler of Screen UK. The members are really all the well known names in digital, so the likes of Xerox, Ricoh, Konica Minolta, Canon together with providers of software for that digital space.

The remit is very much about networking, because members really get the chance to talk to competitors around a table, resolve issues over advertising issues or patent issues, without the need to employ legal representation. It’s a superb ‘club’ for that.

Also, Picon provides lots of health and safety information, and environmental information, via consultants and key speakers etc. And we also get in finance companies that can perhaps help with funding digital equipment purchases, where the perception of residual values can be problematic.

So does this Digital Focus Group talk very much about the state of the market and trends impacting print etc?

Yes, and Picon’s main council meeting has a section on it and has done so for more than six years. All participants around the table talk openly about their opinions on the state of the market and that topic line has migrated into the Digital Focus Group where people who aren’t on the main council are able to discuss their particular sector difficulties quite openly.

Picon is there to support its manufacturing and supplier members. Do you therefore see its role/scope changing as its membership base does so?

We believe firmly that there will still be some form of ‘media’ – we’ve seen a significant fall in paper sales over the last ten years and lower cost email campaigns taking place instead of printed campaigns – so Picon will have to monitor whether that kind of evolution continues or whether major organisations, like Amazon and Google for example, once campaigning against paper for environmental reasons have now come round in its favour thanks largely to the work of Two Sides.

You have said that you will do everything you can to ensure the success of Ipex 2014. What’s Picon’s take on trade shows given that changing shape of the print industry?

Well clearly Fespa, which moves around the world, has had a very successful trip to the ExCeL Centre, and with its family of digital suppliers - including wide-format suppliers - there is a danger now that Ipex has become wounded by that success at the very venue where it is hoping to run a successful show in 2014.

At the end of the day Picon can only do so much because it’s down to the individual members, their budgets and perceived return-on-investment as to whether they go to Ipex or not. But Picon has historically, and will always, assist members financially and subsidise the space they take at the Ipex show – that has been one of the huge advantages of being a Picon member, and even before that as an APMI member.

Our take is that we’ve seen some of the big metal suppliers, like Heidelberg, run open houses and we’re running open houses here at Apex Digital Graphics, because lifting a big piece of equipment and moving it is costly and when you look at the state of the economy it would take significant effort on the part of the show organiser to bring back or attract some of the traditional exhibitors to Ipex 2014. So it is what it is – maybe in 2018 it’ll be an improved show because if the economy has improved by then maybe margins will have improved for print suppliers and maybe they’ll look upon it more philosophically and with a more positive head.

But as Picon no longer owns Ipex would you consider offering financial incentives for members to go to other shows?

Historically it’s Ipex that Picon has always supported because the members of Picon were predominantly those companies that went to that show. I don’t think we’ll see another Ipex the size of the 2006 event – many other shows have now encircled it – but partly it’s also just indicative of the changing market. But I think Picon will continue to support Ipex.

Like your predecessor, you have stated that a top priority is to increase the effectiveness of the UK print industry’s representations to government and other bodies. How do you see that manifesting itself?

Picon will continue to have a consultant that does lobbying, but now under the new consolidated organisation [GPMA] the Picon representative will be able to talk on behalf of seven industry bodies from seven different sectors of the market. So we will be able to go forward from now on, thanks to Peter Morris’s great efforts, with a much larger representation to Government minsters.

If we could get other bodies on board the GPMA it would be even better for the industry as a whole. There is only so much time a consultant gets because there are only so many lobbying opportunites. If they can say they are representing the industry as a whole then I think they will have greater influence - whether it's the consultant we use or in agreement with the BPIF…

So what would you say the main issues are today for manufacturers and how is that impacting upon their focus/growth, and the industry?

The biggest challenge for all suppliers is one of margin; the last six years have stripped bare many a margin which is why we’ve seen so many walking from Ipex. An improvement in the economy will enable some creative inventors to bring new printing machinery into the marketplace and begin to change the sector again.