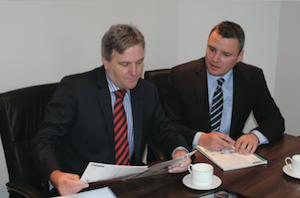 In an exclusive interview with Sign & Digital UK’s Rudi Blackett, Vivid Laminating’s sales director Richard Marlow and export manager Bruce Cozens talk about why they believe the Easymount wide format systems are so popular, trade shows in Europe, America & Brazil, and why they’ve decided to return to Sign & Digital UK in 2015 after a six-year hiatus.

Vivid’s long-serving Export Manager Sharon Marvin retired earlier this year and Cozens’ role has recently changed with it, as he now heads up the Export Team.

I asked them what impact this has had after both working with UK customers for so long.

BC: I suppose this has changed my role the most. Richard and I would both be visiting our customers within the UK, and with me now working with our Export Customers, I am based in the office a lot more than I used to be, as well as travelling for customer meetings, open days and training.

RM: We would probably only both be in the office 1 day a week, catching up with the rest of the team and our MD, so in fact, we will only still meet up as much as we used to.

RB: How long have you both worked for Vivid?

BC: Vivid originally began back in 1987 as a document presentation company, producing binding machines and consumables. I started in Sales in 1993, moving to the role of Product Manager in 2010 and earlier this year as Export Manager.

RM: My career with Vivid began in 1997. We’ve witnessed a lot of changes in this time, not just at Vivid but within the print and sign industry generally. In fact, Bruce and I used to do sales and the installs, but as brands like the Easymount have grown, we now employ 5 trained engineers to carry out the install. Vivid aren’t just ‘box shifters’. We make sure that our systems are installed the proper way, with all day being spent onsite if needed. 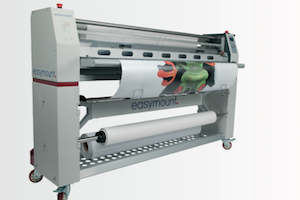 RB: Your Easymount Wide Format Laminators are used by many sign makers. What makes them so popular?

RM: I think their simplicity is one of the biggest appeals. Companies want to be able to get work in and get it finished quickly without any hassle. Every Easymount model we produce is designed to work with the end-user in mind. By listening to our customers over the years, the Easymount range has evolved into an award-winning brand. In fact, the Easymount brand is now 10 years old and the very first model we sold is still being used today! Because it’s No.1, there’s an Easymount in-use from Land’s-End to the Shetland Islands, and everywhere else in-between, as well as the rest of the world of course!

BC: I’ve also always liked the fact of how well built they are. We know that sign makers are going to give them a real hammering, so they need a heavy duty machine that will give them a very high quality finish that uses very reliable components, whilst still being easy to set-up and operate. Our customers know that from receipt of their order, to the site survey, to the install, we are going to give them a first-class service.

RB: You’ve recently launched 4 new models of Easymount. What can you tell me about them?

BC: The Easymount Sign range is our entry-level wide format laminating system. We have the smaller format 650, 720 and 880mm wide machines and we now also offer 1400 and 1600mm systems in both heat assist and cold options. All 4 models also have self-gripping mandrels and a single lift mechanism. These New Signs are very efficient, but are priced at entry-level. They’re quick as well, at 5m a minute and also have a built-in media take-up unit.

RB: How does this feature benefit the end-user?

RM: It means that you can laminate reel-to-reel. For example, 50m of printed media can be laminated, rewound onto another core, boxed up and sent out to site for installation or be unwound on a bench for cutting and mounting when required.

RB: What are some of the typical uses for the Easymount?

RM: We know the benefits of laminating print, as it protects and enhances graphics, so wherever there is a need for wider format print, then the Easymount is in use for finishing. There are thousands of companies using the Easymount, including Sign Makers, Schools & Colleges, Vehicle Wrappers, Exhibition Graphics Firms, even hospitals.

RB: What are the other systems available? BC: The Easymount can also be purchased as Cold, Heat Assist and Double Hot machines. The double hot versions allow you to encapsulate work. They start at 1200mm wide, going up to 1400, 1600 and 2100mm widths for the cold models.

RM: These have multilingual control panels and can run a little faster than the Sign versions. You can also store spare mandrels of vinyl and film on them too. The Sign models are more entry-level and medium usage, with the Cold,Heat Assist and Double Hot systems being more for industrial users.

RB: Why do you think the Easymount is a better choice than some of the more expensive wide format laminators?

BC: We are confident enough with our Easymount range that we do not put other systems down. We know the Easymount is No.1 in Europe which we feel speaks for itself.

RM: Take Roland DG as an example. They’re a huge company and their wide format printers are known throughout the world as one of the highest quality machines you can buy. All of their UK Training Academies now have an Easymount installed, which they use on all of their finishing and vehicle wrap courses.

RB: You’ve recently confirmed that you’ll be exhibiting at Sign & Digital UK in 2015, your first show with us in 6 years. 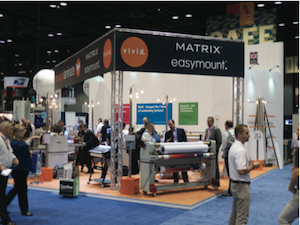 RM: We’ve always known that Sign & Digital UK was an important event on the Sign Industry calendar. Our first show was in 2005 and we then returned between 2007 and 2009. What we found however is that many of our resellers were understandably also exhibiting, with many of them also showing the Easymount on their own stands. We got to a situation where the end-user would have the demo on a reseller stand and then visit us to ask if we would undercut the reseller price, something which we will categorically not do. In the end, it didn’t make sense in us continuing to exhibit, as our resellers had great representation of the Easymount brand themselves.

RB: So what was the main reason behind your return to the NEC?

RM: We spoke with the show organisers and looked at how many of our resellers will be exhibiting next year. There is something like 12 individual partners that distribute the Easymount all at the show. The opportunity to have not only all these resellers under 1 roof for three days, but also to bring some of our latest and best-selling systems to the show was too good to miss. We want our resellers to know that we are there to fully support them at Sign & Digital UK in 2015. We’re inviting our resellers to bring their customers to our stand at the show. We’ll talk them through the features and benefits of the Easymount, answer their questions, do the demo and then they can maybe make the sale. Everyone wins; the customer gets a brand new Easymount, the reseller has made a sale, we’ve made a sale to the reseller and Sign & Digital UK have Vivid back at the NEC!

RB: You’ve had quite a busy year already with shows. What have been your highlights?

BC: I think expanding our range by launching 7 new products at IPEX in London was a great achievement. Not only did we have the new Easymount Sign systems, we also used the show to introduce 3 new Matrix Laminators to the industry. We’ve also been to ExpoPrint in Sa?o Paulo, the first time that we have ever exhibited at a trade show in South America and also our return to Graph Expo in Chicago in September. 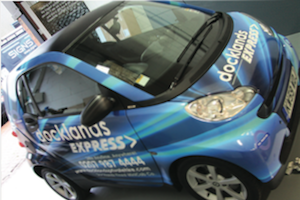 RB: Were the shows beneficial to Vivid?

BC: Absolutely. We’ve recently announced new resellers in South America who we met at ExpoPrint and they are already importing the Matrix. Graph Expo was also a huge success for us. We hadn’t exhibited in Chicago since 2011 and we now have an Exclusive Distribution Partner for the Easymount range in the US called Rock Hill Distribution.

RB: Apart from Sign & Digital UK, are you planning on exhibiting elsewhere in 2015? BC: We’ll be attending FESPA in Cologne in the May, Chicago once again for Graph Expo and German show Druck+Form in October.