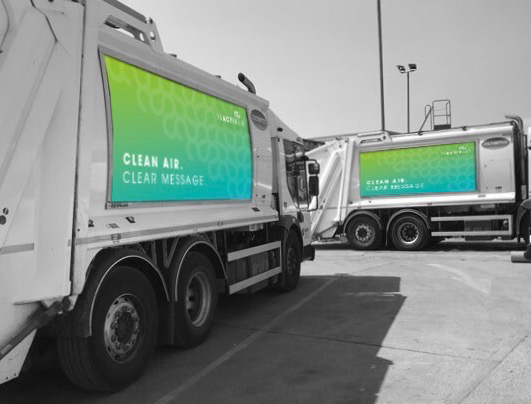 Being greener is about more than making money - it’s a moral responsibility that some PSPs are taking extremely seriously. So are you?

If you could clean the air - why wouldn’t you? A timely question, and one which will have brought Gardners much attention - and hopefully sales - when it asked it at the launch of its air purifying ReactivAir print coating in the summer. But it’s not all about making money - is it?

“It seems intrinsic now to us to be greener, to want to save the planet for future generations. We have all become morally more responsible,” said Richard Courtney, director of Gardners, way before the Covid-19 pandemic concentrated minds.

The ‘Guardian’ recently reported that lockdowns across the world have led to sharp drops in carbon emissions. Researchers found that global CO2 emissions dropped by more than 25% in April 2020, and nitrogen oxides by 30%. However, it’s predicted that these results are unlikely to have an ongoing impact on the global climate crisis unless 123 countries across the world - which account for 99% of fossil fuel emissions - commit to real changes. To achieve this, businesses must also commit to green and more sustainable solutions, something that wide-format specialist Gardners is spending research and development time and funds on.

In July this year it announced a breakthrough with the introduction of the truly revolutionary air purifying coating ReactivAir. With ‘pollution eating’ qualities and technology developed by NASA scientists, this coating is powered by PureTi, a technology Gardners first came across in the construction sector, where the team found it was typically used to protect the external façade of high-rise buildings due to its ability to ‘eat’ volatile organic compounds and nitrous oxides - better known as smog. It’s made from naturally occurring materials and utilising the concept of photocatalysis, it purifies the air by using energy from natural sunlight to breakdown harmful pollutants and odour molecules in the air surrounding the area meaning it can clean the air and protect the longevity of any print campaigns.

Results from Sheffield University show 1m2 of ReactivAir can take out about 2g of NOx per day. This means that a single banner can remove the pollution generated from a bus, or about 20 cars, every single day (results that can fluctuate slightly depending on weather conditions, print placements and other influencing factors).

For those living in urban areas, this technology could be game-changing and comes as the UK Government announces it will set legally binding targets to combat environmental challenges, underpinning the Environmental Bill 2020 and supporting its net zero emissions target for 2050.

Perhaps this announcement is unsurprising as in January 2020, research highlighted that more than one in 19 deaths in the UK’s largest towns and cities were linked to exposure to toxic air, with the World Health Organisation reporting that 4.2m people die each year from exposure to outdoor air pollution. With studies showing that the UK is not currently meeting the legally binding target of an annual mean of 40 micrograms per cubic metre, it’s clear that as a nation, we need to step up our efforts.

Gardners hopes that by asking: “If you could clean the air around you or improve your environmental credentials while you carry out campaigns you’d already planned in, why wouldn’t you?” that options like ReactivAir will become the norm for graphic display placements - be that fleet, billboard campaigns, larger property placements or other. From a business perspective, it is already reviewing how this can be used in all campaigns to support green initiatives alongside communication goals.

But, the company’s commitment to its environmental promises goes further. In 2019, it launched its double-sided changeable vehicle banner that offers a low-cost, more sustainable solution for its clients. Introduced following a successful trial with Northumberland County council, it utilises a patent Agripa frame system that can be easily ‘flipped’, keeping messages interchangeable and reducing print volumes and client costs.

Earlier this year, Gardners also partnered with Blue Castle and Soyang Europe to trial their new PVC Banner Recycling Scheme to help cut the volume of banners sent to landfill, and to support industry-wide sustainability goals.

Now, according to Gardners sales director James Morris, “at least a dozen additional initiatives are currently being explored” and it’s working hard to start vital ‘green’ conversations in the print industry.

Here’s hoping plenty will join in.