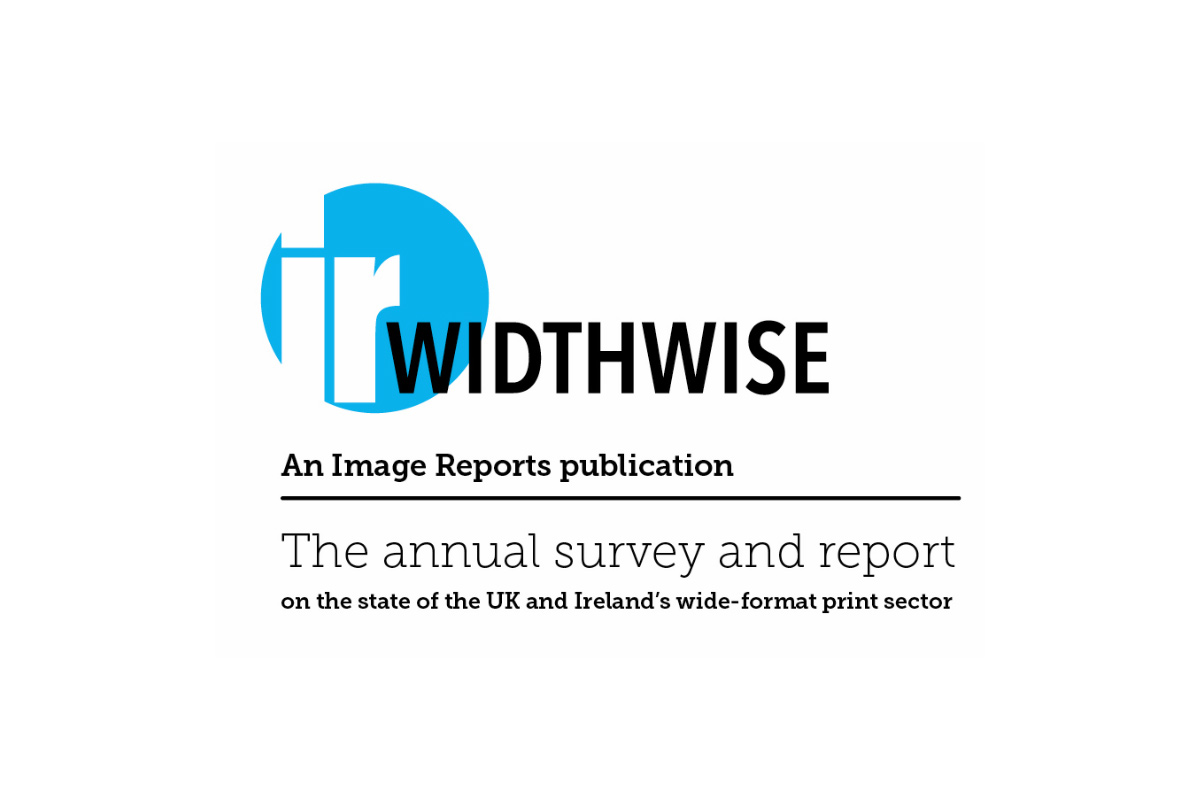 Want to know what’s happening at grassroots level in the large-format print sector? Here’s the heads-up on the soon-to-be-published Widthwise Report 2019.

It’s what we all wanted to hear - optimism in the large-format digital print sector prevails, despite angst over Brexit and pricing. This is no gut feel statement - it’s data-based fact from the 2019 Widthwise poll of the UK’s and Ireland’s PSPs.

Of the 247 print chiefs who responded to the independent survey - carried out by Image Reports at the start of the year - 105 of them said that, looking ahead five years, they were ‘very optimistic’ about the state of business. Another 97 said they were ‘mildly optimistic’, which may sound a bit like damning with faint praise, but the thing to also point out is that only seven respondents said they were even ‘mildly pessimistic’ and just two ‘very pessimistic’.

The good news doesn’t end there. Though 33 PSPs said large-format print margins fell last year, more than half (50.61% - 125 comps) said that they had increased. So perhaps it’s not surprising that, despite all the diversification going on, 63% expect large-format digital print to become a bigger slice of their total business turnover over the next two years. A whopping 86.64% expect to grow their large-format print turnover specifically in 2019.

It might be tempting to think that this optimism is representative of a certain type of PSP, whether that’s by location, size, speciality etc - but that’s not necessarily the case. The mix of PSPs responding to this twelfth annual Widthwise poll is just that - a real mixture, and a reflection of the shape of the sector.

You’ll find the complete participant breakdown in the full Widthwise Report 2019, which will be published alongside the June issue of Image Reports (and be available to download free-of-charge from the Image Reports website at that time too), but to give you an indication, 37.65% of those interviewed each turnover under £250,000, and almost half (48.48%) have five staff or fewer. On the other hand, for 29.56% turnover is more than £1m (including 12.96% turning over more than £5m) and 7.29% have more than 100 staff. 79.35% bought their first large-format printer over a decade ago now, and for 85.02%, wide-format digital is the only kind of print they do.

Asked how they felt about their company’s prospects, 57.89% said they were confident of growth. Another 33.20% admitted to being ‘concerned, but less so than they were in 2018’. Thankfully, only 8.91% said they were more anxious - a figure not to be dismissed of course.

As you might expect, the impact of Brexit was top of the list of concerns for 2019 and beyond, with 61.96% saying it was one of their major worries. Again unsurprisingly, that was followed by the price of supplies - listed by half.

However, 34.82% still expect to increase staffing in the period to the end 2020. Despite lots of talk about finding it increasingly difficult to recruit, 77.33% said that’s not the case. Moreover, 94.33% say they are not finding it harder to retain staff, despite the common belief that that is so.

Interestingly, one-in-five (21.46%) said they will be specifically recruiting people with particular new sector knowledge in 2019, despite entry into new markets becoming a fairly low priority for many PSPs - 72.47% said they will not be looking to move into new areas of large- format print over the next two years. We’ll analyse that in the full Widthwise Report, but it’s worth noting that asked to indicate which areas of work they currently undertake, of all the sector options, general banners/flags work is undertaken by most (80.97% - 200 comps. But textiles are as yet not as big a part of that as you might think. Only 32 companies said they are doing that).

Asked which markets are fastest growing for their company, exhibition and display graphics came out top (15.79%), followed by general banners/flags (11.74%) then transport graphics (6.88). Specialist markets oft highlighted as potential money-spinners, are not growing fastest - packaging was earmarked as the fastest growing type of print by just 1.21%, cardboard engineering by 0.81%, and no-one said furniture. Five companies (2.02%) said textiles for garments and three (1.21%) said textiles for home/interiors.

While the majority (72.47%) do not plan to move into new areas at all - and perhaps that’s because they have diversified quite significantly already - of those that are, 5.26% said they’ll move into textiles for banners/flags. Wallpapers/murals and textiles for garments each have 4.86% looking at getting involved. Textiles for home/interiors lags a bit behind at 3.64%, with other specialist sectors enticing fewer than those – underlining the fact that niche sectors are, in the short term at least, likely to stay just that for the UK/Ireland’s large-format PSPs.

So if new markets are not particularly a priority for most, what is? Well, growing turnover is. Half of the respondents said this was top of their ‘must do’ list for 2019. That was followed by 17.28% saying their priority would be actions to strengthen the company image/brand/reputation.

Certainly not top is investment! 44.94% spent £0 in 2018 and expect zero spend in 2019 in hardware/software across their businesses.

Not a lot has changed in terms of outlook when it comes to Industry 4.0 (e.g. the Internet of Things, artificial intelligence, workflow integration) developments - 94.74 % have still not invested in it, and none of those said they will do so in 2019 either.

It’s a shame to end on that negative note, when the overall outlook is so positive - but the data tells it as it is! We delve deeper in the full Widthwise Report 2019, which will be landing with you in early June. Keep your eyes open.

Thank you, and congrats

A big thank you to all the PSPs that took part in the 2019 Widthwise Survey.

Many congratulations to those who won in the poll prize draw. The winners are:

“Image Report is the one industry magazine that I tend to read from cover to cover - I guess largely because it is so specific and relevant to the wide- and super-wide sector. The Widthwise Report is a useful barometer of the state of the sector and helps me bring my own views into a wider perspective.

The survey is a great method of gauging accurate information and giving readers valuable feedback and updates on all things wide-format. Working together and sharing industry knowledge is a fantastic way for us all to maintain and grow our companies.”

Being a person who likes to keep up to date with the latest goings on in the print industry I was more than happy to take part in the Widthwide survey - it provides an opportunity to hear what other people have to say as well as having my say.  Image Reports makes a great read and keeps us updated with useful articles within the industry.

I have always chosen to participate in the Widthwise survey because  I see the sector as a community and by participating we are helping everyone else in the large-format community understand how this sector is developing. The large-format sector we find ourselves working within is continuously evolving due to technological advances and Image Reports helps us keep up with those advances.

“I find the Widthwise survey a very useful tool for gauging what others are doing in large-format. As well as sharing our own experiences, we are always looking for the latest trends and innovations to keep us ahead of the game.”