It’s time to sing the praises of those companies that have released products over the last 12 months that, in the eyes of the editorial team, should make a real difference in the wide-format print sector. Those deemed particularly worthy of attention this year are…

In March 2018 Zund introduced this intelligent optics system for automated digital capture of registration marks. The camera is mounted above the centre of the cutter - either on a support frame or suspended from the ceiling. One-shot capture technology means the number of register marks along with their position on the cutting surface become irrelevant. Data processing functions are integrated in the ZCC (Zund Cut Center) software so that in seconds, algorithms analyse the data captured by the camera and simultaneously compensate for any distortions. 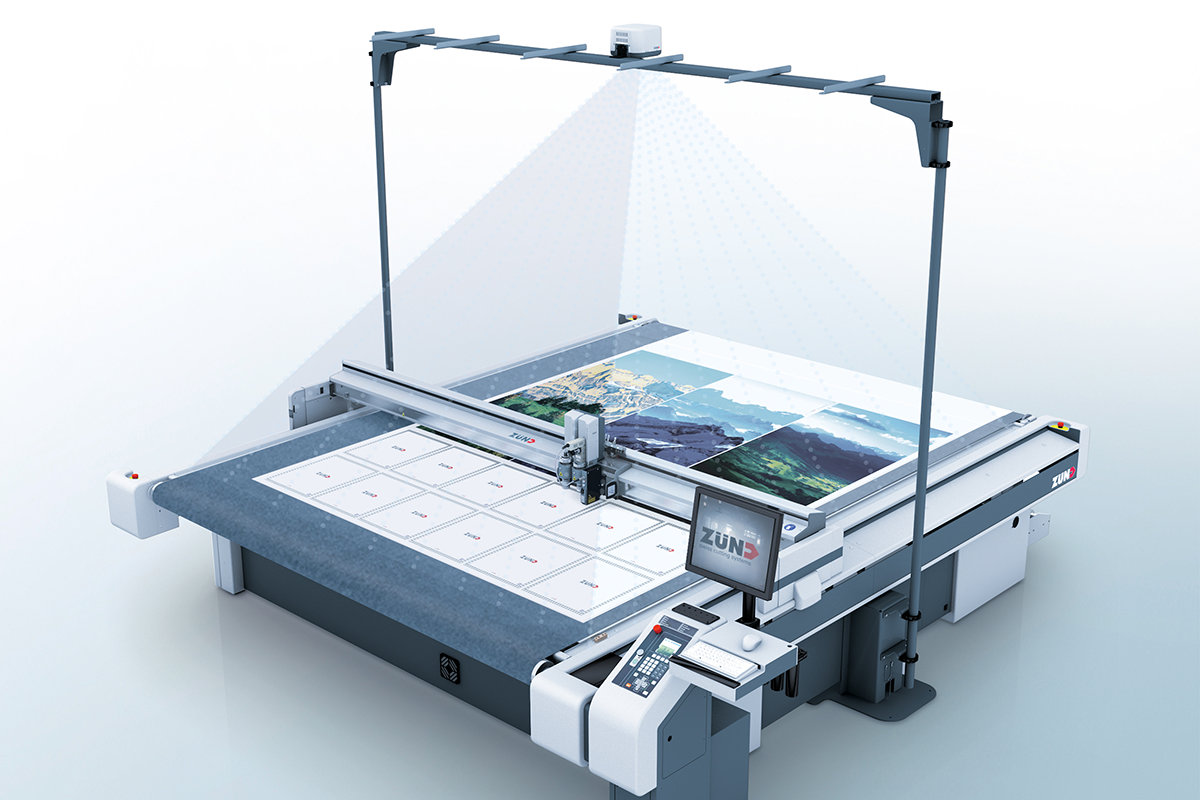 The Jeti Tauro H3300 is a UV LED inkjet hybrid workhorse that builds on Agfa’s Jet Tauro H2500 device. The machine spec says it is capable of printing up to 3.3m wide at speeds up to 453m2/hr,

and it is convertible to enable different degrees of automation: manual loading and unloading; master roll-to-roll, allowing for single- or dual-roll printing of up to 600mm in diameter and up to 800kg; semi-automation where loading is done manually and unloading is automated; and full automation where a ‘pick and place’ system picks the boards or sheets directly from the pallet and places them on the media registration table. After printing, an unloader picks up the boards or sheets from the output conveyor and puts them directly onto the pallet. 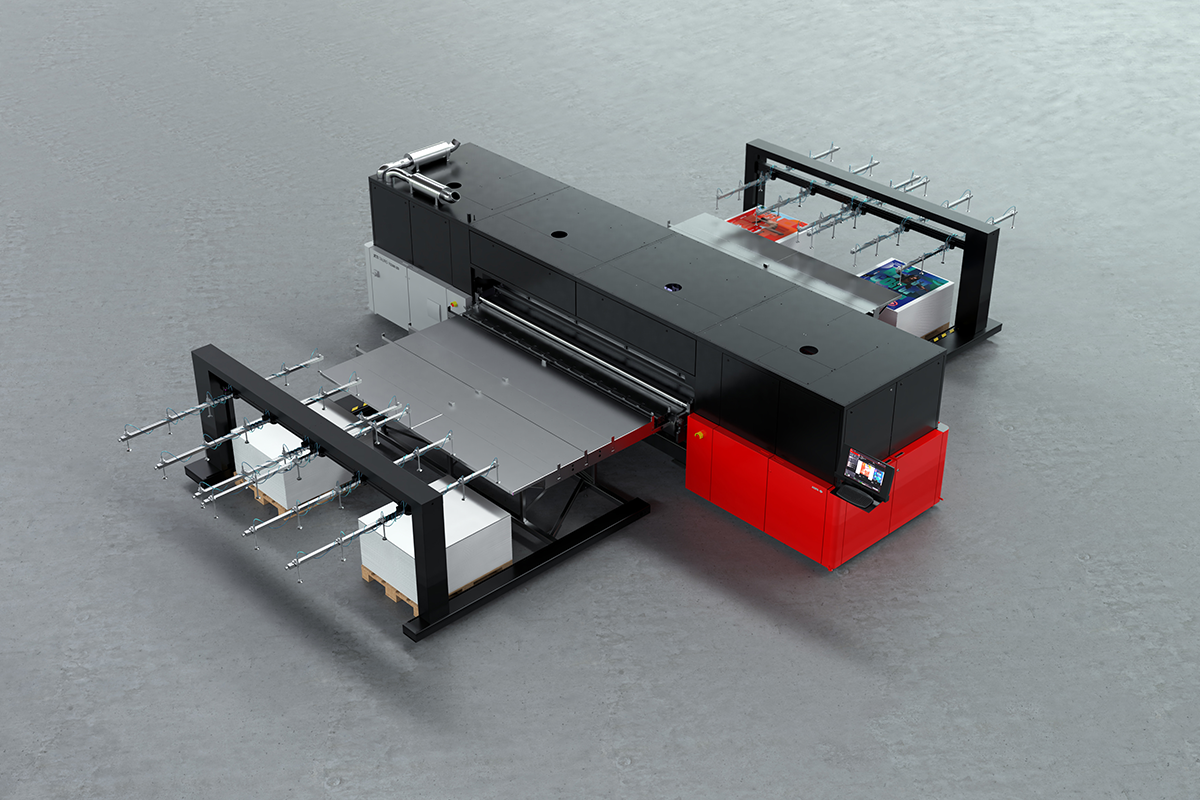 At Fespa 2018 EFI unveiled its next generation hybrid flatbed/roll platform - the 3.2m Vutek h series which comprises the h3 and h5 - the h3 has three rows of 7pl UltraDrop Technology greyscale printheads and the h5 has five. The machines offer 4- or 8-colour+white printing as well as five-layer print capability in a single pass. The h3 (pictured) has a maximum throughput of up to 74 boards per hour and the h5 up to 109 boards per hour. The printers sit between the GS and HS series machines. 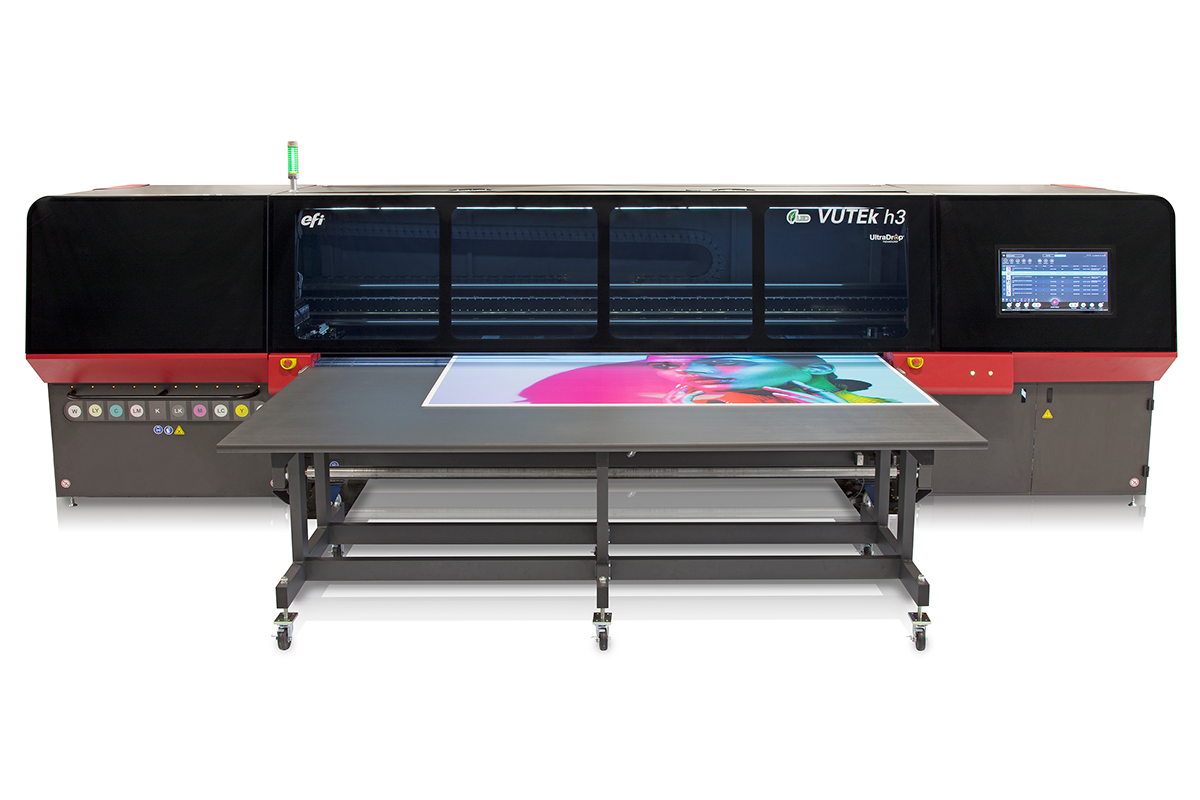 The Storm HD6 is a direct-to-garment printing system targeted at small to mid-size businesses wanting to handle runs of between one and 500. Unveiled at Fespa 2018, the unit uses Kornit’s HD print engine combined with NeoPigment Rapid ink to reduce ink consumption and cost per print. Kornit said the Storm HD6 will reduce both by approximately 30% compared to the Storm Hexa. The Storm HD6 has six colour channels (CMYK, red, green) plus white. 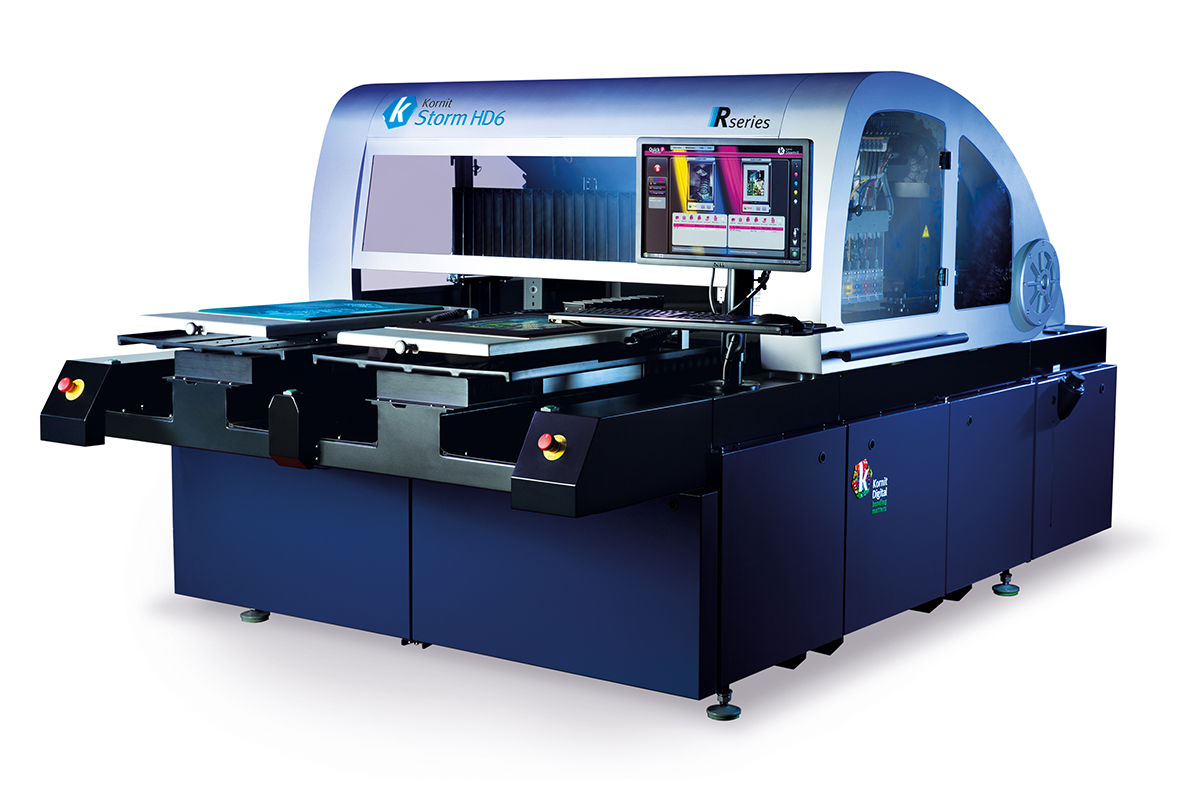 Exclusively for large/wide-format production requirements, Griffin it is a cross-platform solution designed to provide simplicity for printing and cutting. Griffin 2.0 - presented at SGIA Expo in October - offers the ability to search across millions of combinations to find the most tightly-nested layouts. It also has a new feature that allows tiling to be controlled independently in horizontal and vertical directions, and another that enables automatic generation of tight cutting tool paths at high speed for cases where no dieline path has been specified in the artwork. Other 2.0 features include: remove dielines; multiple shape import functionality; camera mark enhancements, including a new setting to automatically mirror marks between the front and back of the layout for facilitating face-down cutting; separate single and double sided; and improved retina display support. 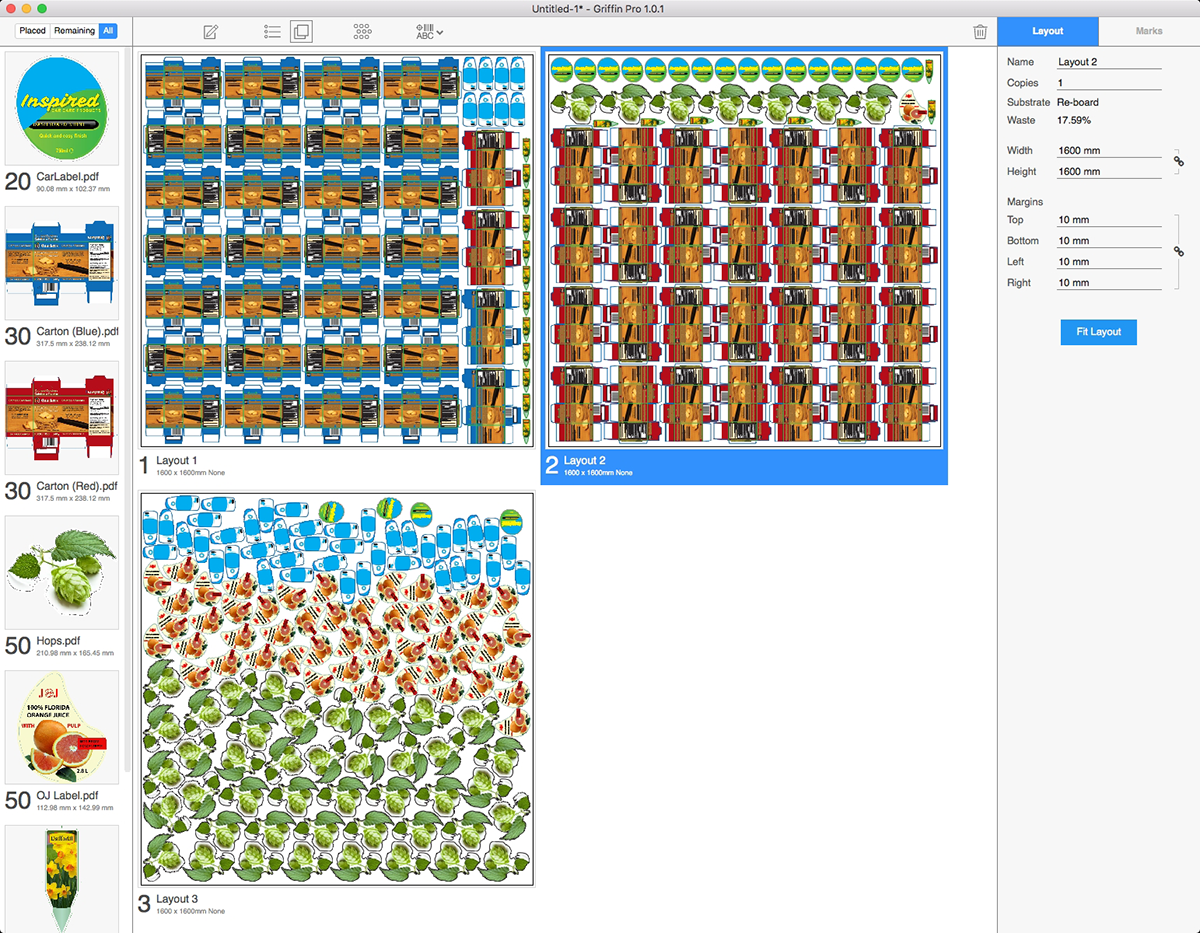 ScreenPro smooths out imperfections in inkjet printing. Recently released Version 2.0 reduces non-uniformity across the web, commonly known as the inkjet smile. The software can be applied to any inkjet technology and print industry workflow, can be added to printers already on the market, or incorporated into an inkjet press that’s still on the drawing board.

If you were on the Onyx stand at Fespa 2018 you will have seen personnel sporting Onyx 18 lapel badges and making lots of noise about the launch of this wide- and grand-format software - a package that enables PSPs to prove to customers that colour accuracy, consistency and conformance to standards such as G7 and Fogra have been met. At SGIA Expo in October the company claimed a first for the wide-format print industry with the 18.5 release - the first Rip solution with the Adobe PDF Print Engine 5 (APPE 5). 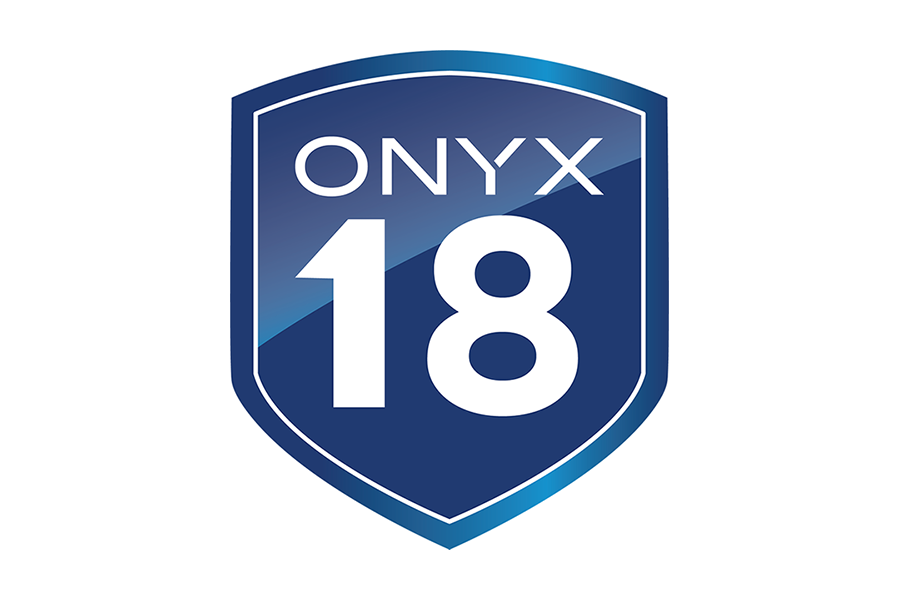 This neat 3D wallpaper printing technology was first previewed at the last Drupa, but with units just reaching the UK from the Lithuanian manufacturer we’ve decided to include it this year. Dimense - based on latex eco-friendly inks and PVC-free structure-forming Ecodeco media - delivers output that won’t fade in direct light, can be cleaned without scratching or damage and is C1 fire rated. It can print at speeds of up to 20m2/hr with a print width of 1.6m and is sold in the UK via Colourgen. 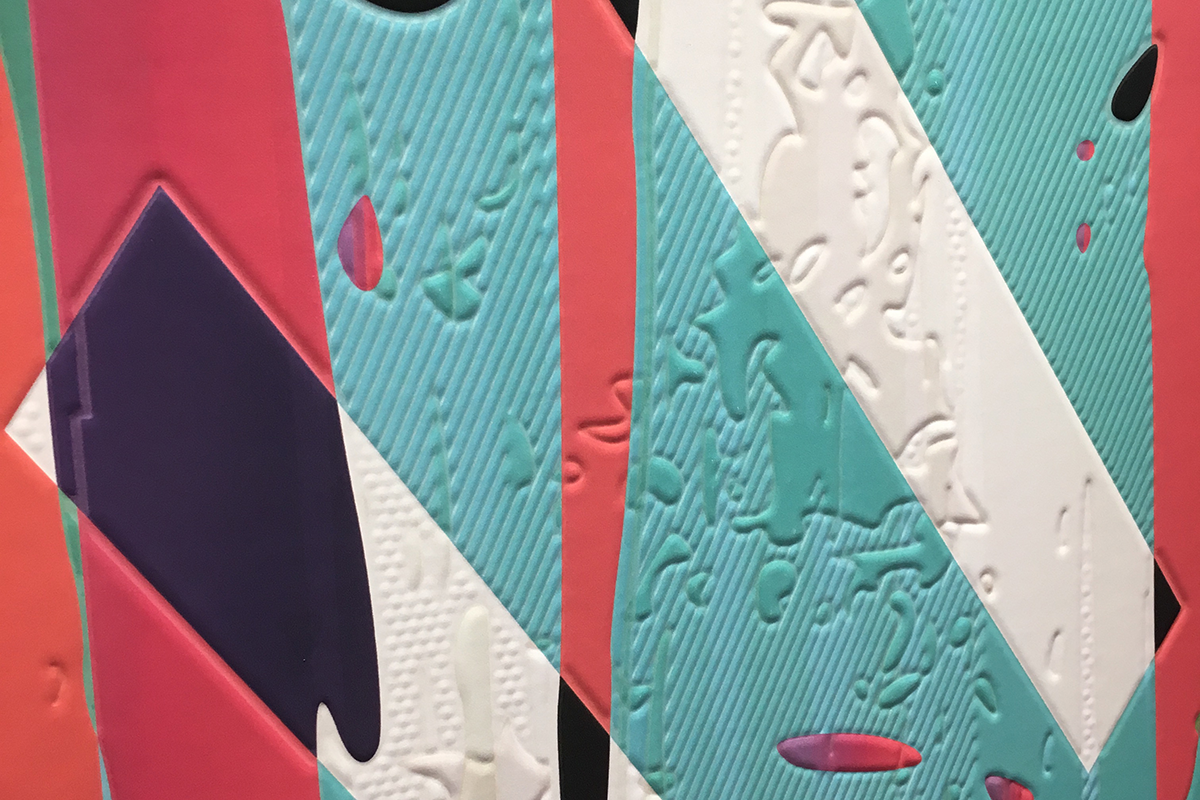 Former Cestrian boss Phill Reynolds has set up a new business selling OPOC, or ‘Online Proof Of Completion’, a clever software tool that makes data collection at remote sites more efficient, allowing businesses to track and improve live print installation projects. A Cloud-based desktop platform links with mobile devices, using an app to automatically geostamp location, time and date, from the start of the job to the finish. Data is streamed instantly to the control centre, where thousands of details are clearly displayed and made available for use. 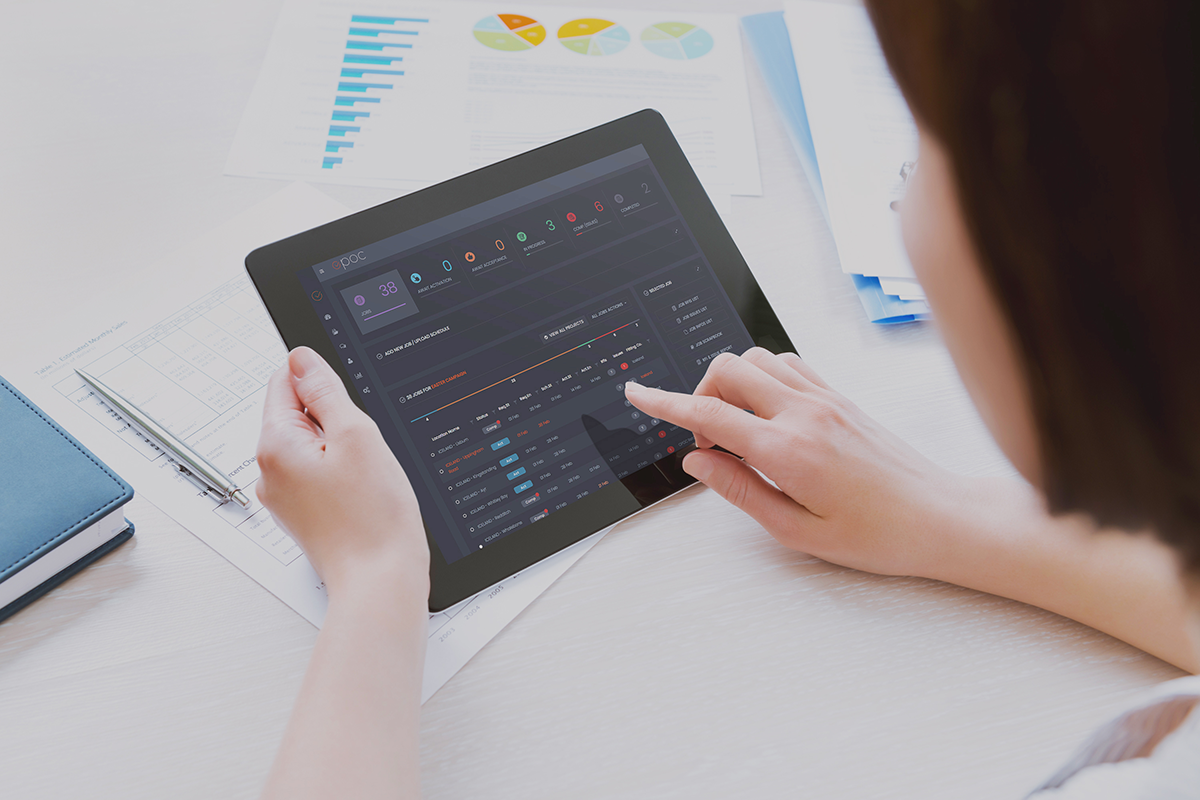 HP announced its rigid technology at the ISA Sign Expo in March and the R2000 is the first machine to use it. Using HP’s water-based latex inks - and that includes a white ink - the Latex R2000 prints at up to 88m2/hr with continuous loading and can handle up to 100kg rolls. It has automatic maintenance, smart vacuum, and easy loading capabilities, and productivity can be enhanced with HP Smart Services 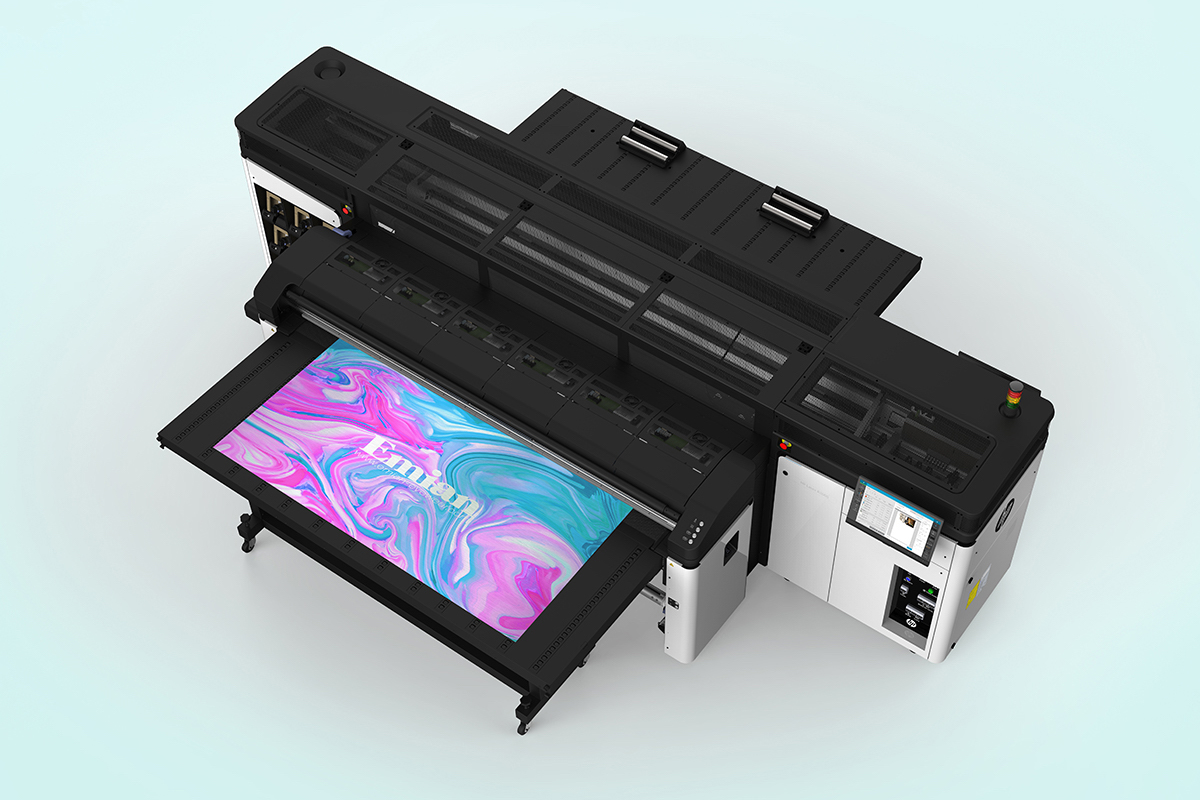 The 250HS is the first in Durst’s new P5 printer series announced back in February. The new printers have printhead arrays built with Fujifilm Mems nozzle plates (designed for 24/7 production), use new inks (P5 Premium WG ink and P5 POP HS ink available initially), have a new media transport system (with gearless direct drive for precision, 16 vacuum chambers and a special synthetic coating to prevent static friction), and incorporate Durst Symphony, which comprises a new touchscreen icon-based user interface, a workflow suite of applications (with features beyond Ripping such as print data management and versioning and customisable colour management), and an analytics platform. The flagship 250HS is based on the Durst P10 250HS but is 70% faster, boasts a 20% increase in resolution, a 80% decrease in printhead maintenance, and 40% quicker media changing. It has a top resolution of 1200dpi, with a drop-size of 5pcl. In two-pass mode the P5 250HS can run at up to 240m2/hr. 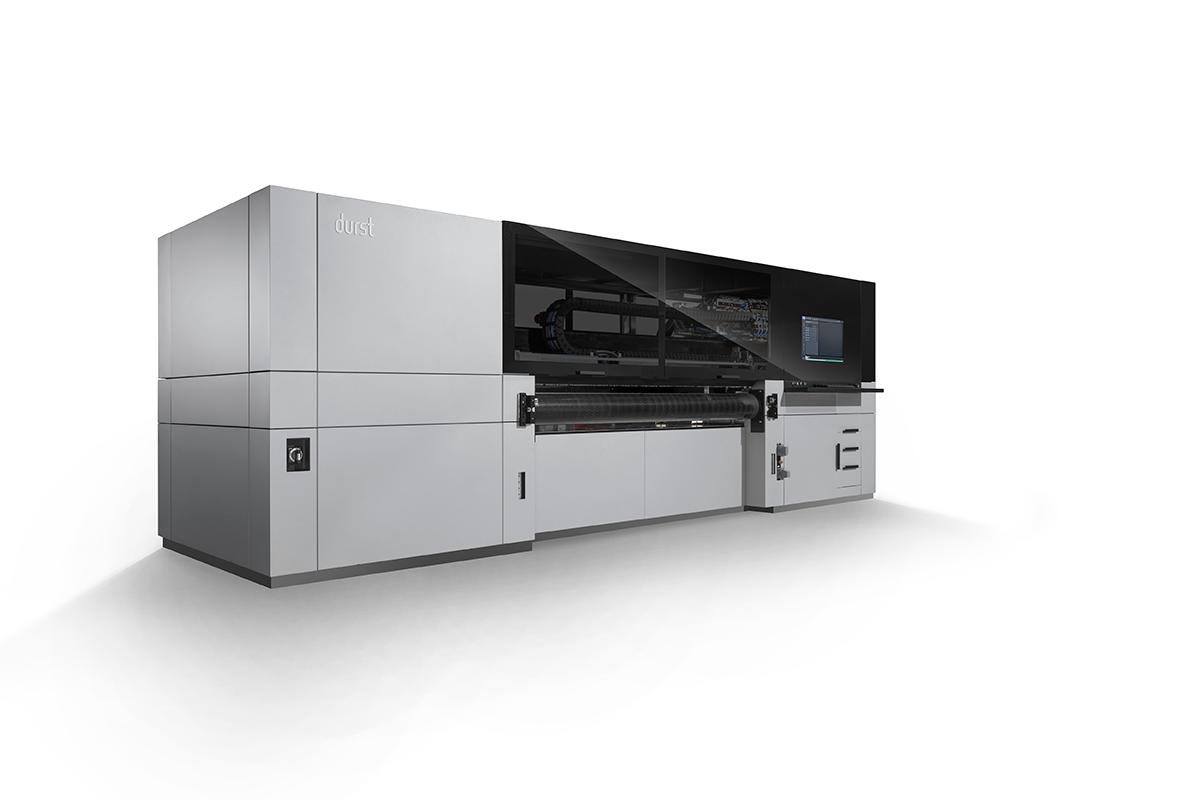 Released in March, this package - which directly links to Kongsberg cutting tables - comes preloaded with workflows for sign and large-format production, with Esko promising that in five days you will be up and running with an automated system that handles tasks like preflighting, PDF optimisation, cut path and bleed creation, tiling and nesting - as well as producing reports. It costs £29,000 implemented. 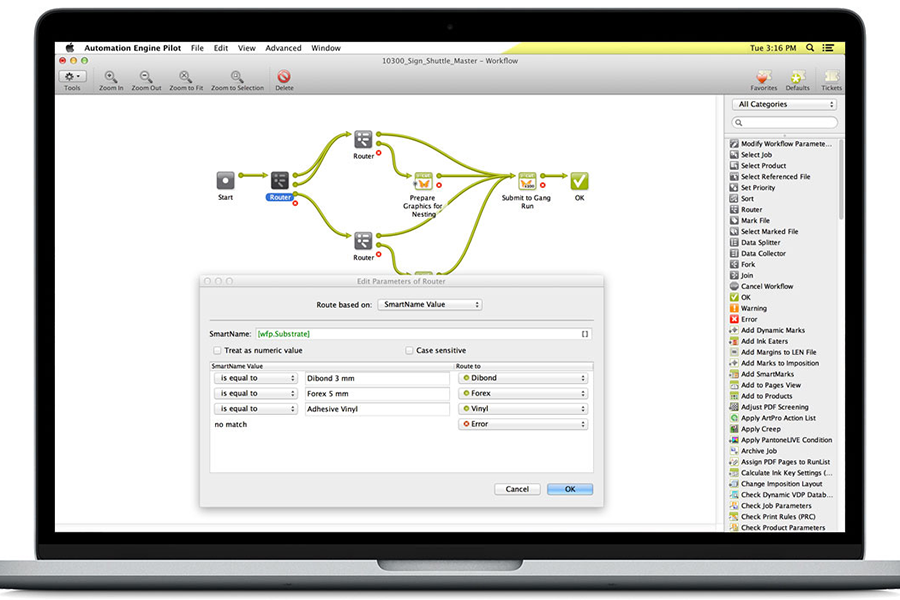