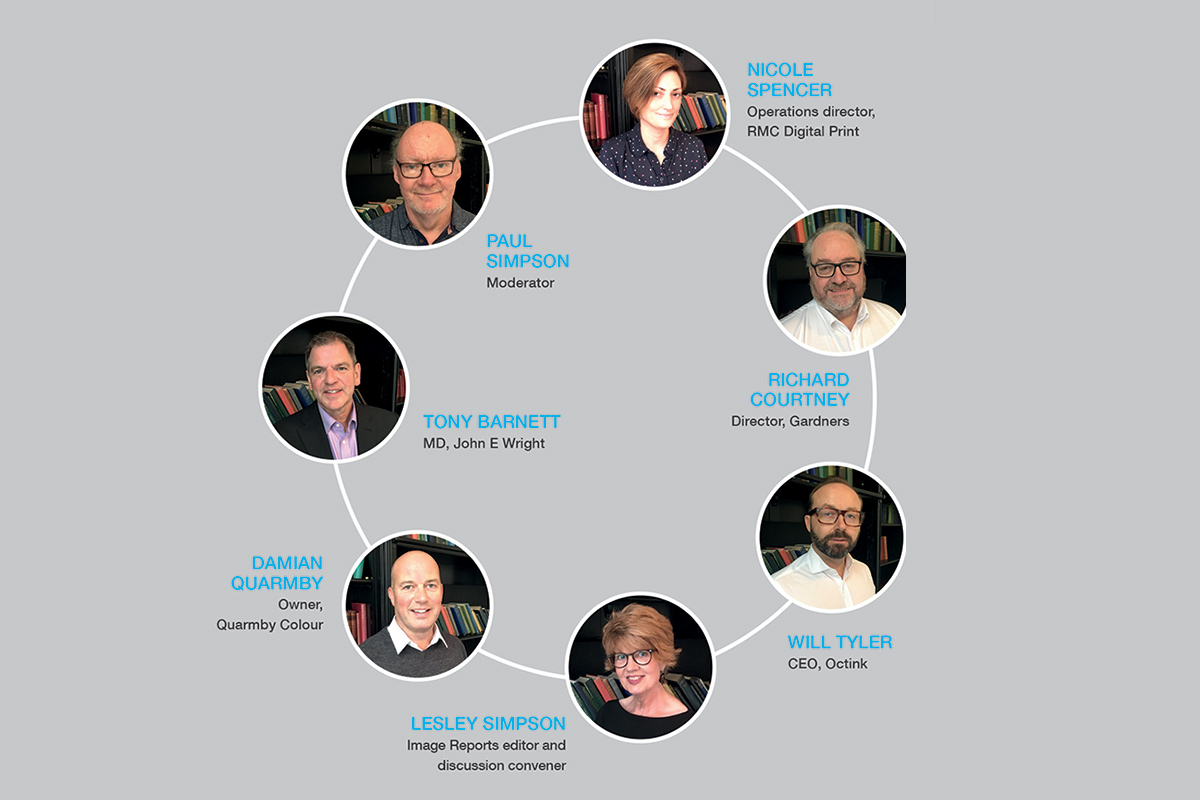 What lies ahead for large-format print companies in 2020? We brought together five company chiefs to discuss doing business today and in the coming decade.

42.51% said they were feeling very buoyant about their business over that period - another 39.27% mildly optimistic, 14.57% neutral

For 61.94% the biggest concern was the impact of Brexit, followed by the price of supplies

Never has it been more apparent that there’s no “one size fits all” when it comes to running a successful large-format print business than at this year’s Widthwise Round Table discussion on the state of the sector.

Having brought together five print chiefs from companies of different sizes and focus (£1.5m turnover, 15 staff Quarmby; 3m turnover, 20 staff RMC; £6m turnover, 80 staff John E Wright; 16m turnover, 95 staff Octink; 30.5m, 120 staff Gardners) the mood was set by the key findings of the Image Reports annual Widthwise poll, undertaken at the start of 2019. As you will know if you’ve read the subsequent Widthwise Report - or from the key data panel above if not - the upshot of that survey was a pervading sense of optimism, and that was reflected in the opening comment around the table some nine months later. As you might expect, not all the participants agreed all the time on where the opportunities and pitfalls lie, but they agreed with Gardners director Richard Courtney’s early remark that “in general the outlook is positive”.

“Our margin has been under pressure this year, but then we’re in transition [the company was acquired by Elaghmore in the Spring and is in the process of forming part of the new Hexcite group of operations],” Courtney continued. “The retail market was our main customer-base some time back, then we got a reputation for being a volume supplier for OOH and now we’re moving back into the retail supply space as digital has hit the billboard market - and because the shape of the market has changed. Ten years ago a couple of companies controlled most of the work and that’s not the case now. So there’s more up for grabs.”

“Digital is expensive so we’re seeing a lot of print spend,” added Will Tyler, CEO of Octink, while pointing out that he believes the sector is nevertheless in for a time of consolidation. “I think we’ll see a lot of PSPs fall over. We have had people knocking on our door asking if we’re interested in buying them. It’s at the point where they’re two a penny.”

“Yes, I’d rather be a £1m turnover company or a £100m company,” replied Courtney, highlighting that was one of the reasons behind the new growth strategy.

“I’m hearing a few middling size companies saying they wish they were small again,” added Nicole Spencer, operations director at trade printer RMC Digital Print, and now president of Fespa UK Association. “Many have invested in kit that eats work and they’re filling them with work of little margin.”

“We might be on the acquisition trail ourselves,” piped up Damian Quarmby, owner of family business Quarmby Colour. “But not for another print business - for someone that can help us expand our services into design, fitting, video etc.”

“The thing is, straightforward print margins are not fab. - Full project management jobs is where the money can really be made. I actually need one person who can live and breath certain accounts that require our input from design through to installation,” agreed Tony Barnett, MD at John E Wright.

“Though print is were we get our turnover we have noticed that, even as a trade printer, we are increasingly being asked if we’ll install,” said Spencer. “We can organise that, and do, but we don’t have our own installation team. We made a lot of investment in print kit in 2019 and doubled the size of our factory so our focus has to be on making that pay.”

“Our margins were up around 5% in 2019. The luxury ‘projects’ are nice but the longer run work offsets that profit, but we need to take that on to keep the machines full,” said Quarmby, confident that he’ll see increased turnover in 2020.

“For us it’s a balancing act,’ says Barnett. “We have a new Vutek H5 and we know there’s £600,000 worth of council work out there in the Nottingham area that we are targeting. We’re also targeting universities - we’re in at a couple and once you’re in one others come to you for work, so they are keeping margins up because we’ll do more and more project work for that type of operation. But we couldn’t take that on without doing the type of work where the print machines churn out stuff where its more about shipping the right output in the right boxes. We’ve employed an operations manager to get the best work through the business.”

Then Tyler stepped in with: “We are a wide-format printer but we don’t seem to have much commonality with the rest of you around the table. We are totally focused on specialist projects. We are project managers really. We can have 30 installation teams out every day - there’s hardly any print we produce that we don’t install. A lot of what we do is for the property sector and there’s a huge amount to take into consideration - road closures for access etc - and we take all that on board. One day I’m sure we ourselves will become an attractive buy for a bigger company, because we can cross sell for them!”

“The reality is that we have to chisel profit out of things,” added Courtney. “Continued investment is needed… and an eye to growth markets obviously.” So what are they?

“Well we are developing the Hexcite retail proposition because we think here is real opportunity there,” continued Courtney. ”And there’s lots of scope in spaces/venues where we weren’t a player a few years ago but where they now appreciate our fire-power.”

“I’d say retail has been re-energising too,” said Spencer, “but we’re also seeing a lot of growth in set and exhibition work.” Both Quarmby and Bartlett agreed, again pointing out the demand for more project-orientated PSPs. “The recreation market is a big opportunity too, and we’re getting a lot of fleet vehicle wrap calls,” added Quarmby.

So what of the oft quoted ‘new’ vertical markets that kit and consumables manufacturers make so much noise about? “I think large-format has come of age, and the marketing a lot of the suppliers have done has pushed home the message that you can print onto many things,“ said Courtney. “But a lot of that potential new work is in the B2C market, not B2B. It’s a whole different business model. It’s like changing our business from what its currently doing to selling cheese!”

It was with general nods of agreement to that last comment and with comment that online storefronts for the B2C marketplace were little more than a headache, that Tyler bucked the trend and said he “wouldn’t be in business if it weren’t for emerging new vertical markets”. Like digitally printed textiles perchance?

It was a reflection of the 2019 Widthwise research that Round Table participants flagged up their involvement in soft signage, lightboxes and non-illuminated display graphics, wallpaper, and as Spencer pointed out, “any kind of textile print for things like show homes”, but there was a deafening silence on the chance of them getting involved in fashion or bedding, curtains etc. “I do think PSPs will get involved in more bespoke interiors textile print, but again, fashion and the high volume stuff is a whole different world,” reiterated Courtney.

So where are large-format PSPs focussing? Well, perhaps more than ever on internal efficiencies and management issues. “The thing is, peaks and troughs are really marked now - clients are leaving the decision making process until a minute to midnight. If you get really busy you don’t make the money you should because margin flies out of the window due to inefficiencies,” said Tyler.

“We actually sell ourselves as a tech company rather than as a print one. We built our front/back end system ourselves because we couldn’t find something that fully suited us - and to fulfil our requirement for customer intimacy. In 2020 we want to extend the success of our digital campaign. We have a team of coders who work on online portals. It changes the way work feeds in to us and it’s proving a game changer.”

“We need to upgrade our MIS,” said Spencer. “We have invested a significant amount on print kit and now we need to concentrate on getting the most out that investment. We use Clarity at the moment but we think there must be something that’s better. We’ve been looking and have seen a couple of options similar to what we have, but we’re not impressed with anything we’ve seen to be honest.”

“We need MIS too. At the moment it’s all done visually and by feel of how things are going. We’ve got away with it but it’s going to catch up with us. We have a small physical set-up and not much room to expand, so we need to figure out how to get more profitable work through the factory,” added Quarmby.

“People dismiss the usefulness of a good MIS, but I get a 15 page report at the end of each month and I live my life by it,” said Courtney, who at this point also raised the issue of automation requirements. “We need more automation right across the board, from file delivery to job delivery.”

So will Industry 4.0 developments help there? “I still don’t know what that means,” admitted Quarmby, prompting Tyler’s explanation that is it “manufacturing excellence using the Internet of Things”.

“Using i4.0 technology to find where your bottlenecks are would be very useful,” pointed out Barnett, though there was general agreement with Tyler that it won’t bring “full lights out automation in our businesses in our lifetimes”. “There’s too much that can go wrong,” summed up Spencer.

Speaking of things going wrong, when it came to asking respondents to the Widthwise poll what their top concerns were for 2019 and beyond, the impact of Brexit topped the list. A moratorium on that discussion was declared, but had some interesting things to say on what was listed as the next concern - the cost of supplies. Might things finally be moving in the PSPs’ favour?

“Substrate prices nearly all went up at one point, but we can now see a lot of willingness to try and help us,” said Courtney.

“Yes, we can definitely knock down fabric prices now,” added Quarmby. “For us, more of an issue is training. We need to multi-skill so that we have cover for holidays and for the peaks and troughs.”

The lack of relevant apprenticeships and training was an issue that got the whole group worked up - an issue that will be explored in detail in future issues of the magazine.

“For us, pay increases are an issue,” said Barnett. “If the minimum wage goes up, everyone expects pay rises too.”

Keeping to the staff theme, Courtney then brought up an issue highlighted at last year’s Round Table too - that of foreign staff exiting Britain. “We’ve lost a lot of good people because they’ve gone back to Poland,” he said. At which point Spencer made the obvious, but perhaps sometimes overlooked point: “You have to remember to nurture your staff as well as your clients. We’ve always tried not to have an office vs factory mentality by getting everyone to understand the timelines and requirements of jobs and have a cohesive workforce that understands the pressures across the business. There’s a lot going right in this sector, but everyone involved needs to understand what could go wrong and not jeopardise the hard work required to make companies successful.”