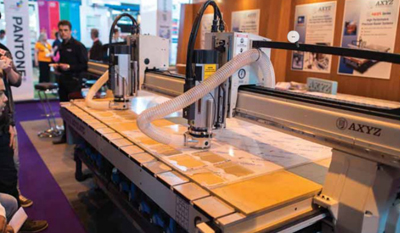 Focus on finishing…and you know it’s likely you’ll significantly improve your margins. So where are the main advances taking place. Nessan Cleary investigates.

There’s been a development frenzy when it comes to cutting tables, but don’t expect the same level of activity elsewhere on the finishing kit front. So in some instances you’re going to continue to suffer from that production bottleneck until manufacturers put the same levels of R&D into other tools as they have into cutting technology. It’s easy to see why the focus has been on such devices – the demand for more automation has been almost palpable. And the developers have risen to the market’s expectation.

Take Esko, which makes the Kongsberg series of cutting tables, with different models aimed at various industry segments and including the XN series, targeted at the sign and display business, with integrated sign cutting software i-cut suite. Here there’s a new faster water-cooled MultiCut HP spindle for faster throughput and for handling thicker materials such as aluminium composite.

There’s a more heavy-duty series, the Kongsberg XP, designed for 24/7 operation and featuring a revolving workstation that keeps the operator table handy but out of the way. The largest is the XP44 with a 2210 x 3200mm work area. Then there’s the XPA series which is highly automated as Esko marketing manager Paul Batesexplains: “You set it running and go and do something else and it will send you a text message if it has a problem.”

Now Esko is working on a larger table with 3.2m wide bed, which should be launched early next year. Bates says that this will be the first of a new generation of tables, which will be faster and more accurate.

The main alternative comes from the Swiss manufacturer Zund, maker of the G3 series. It has a modular approach, taking several different blades, so there’s less need to change them. Different tools are designed for a range of materials from textiles to plastics and corrugated board. The machines cut materials up to 50mm thick and there are several different sizes available, starting from the M1600, with a table of 1330 x 1600mm, right up to the 3XL3200, with a table up to 3210 x 3200mm.

Zund also has an entry-level series having launched its S3 tables last year. They can handle a wide range of materials, including textiles, vinyls, films, thinner plastics, and cardboard. There are optional creasing tools and a 300W router insert. The series starts with six machines, ranging from 1330 x 800mm, up to the top of the range 1800 x 1600mm.

Not surprisingly, given that many cutting tables are sold together with UV flatbed printers, several of the printer manufacturers have also developed their own tables. Thus Mimaki sells the CF2 series of cutting tables, which comes in two sizes: 90x 120cm and 120 x 180cm. They come with a variety of blades for tangential, recipricol and swivel cutting. It’s possible to adjust the depth of the cutter blade to half-cut rigid materials. It also comes with a colour photo sensor to read printed registration marks for more precise cutting of complex shapes.

Océ also sells its own cutting table, the ProCut, which is really a rebadged Zund G3 table.

Blackman and White sells the Mastercut 2200 that comes with a laser cutting tool and is targeted primarily at the textile market. But it also comes with more conventional cutting tools for handling materials such as foamcore and cardboard, and even a router option for tougher substrates such as acrylics.There are several different sizes available right up to five metres wide and ten metres long, but with the most popular in Europe being 3.2 x 5m.

Topcut Bullmer has a 5.2m wide cutter, the PremiumCut ELC. It can take substrates up to 5 x 7m and will cut through most board stocks as well as kevlar and glass fibre. It can run at up to 120mpm and has an optical alignment system, OptiScout7, for precision die-cutting.

Besides the cutting tables, there are also a number of routers. According to Bates the lines between routers and tables are gradually being blurred as the tables gain routing heads and many routers now sport lighter cutting tools. But for now routers are still an essential tool for cutting shapes out of the heavier materials such as solid metal and MDF.

As well as the routing tools, there are also cutting knife options for cutting vinyls, plastics and foam substrates. There’s also an option to replace the standard rack and pinion drives with helical systems for greater accuracy and smoother performance.

AXYZ also makes the budget Z series, which have solid welded steel frames and are designed to cope with materials such as wood, metal and plastic.

In addition AXYZ sells the Pacer range, having bought this company back in 2006. There are several models, including the Pacer 5010 that was launched at the start of this year, with a bed size of 1842 x 3048mm. These are heavy duty routers that use a helical rack and pinion system for the XY movements, with ballscrews for the Z axis.

There’s still a healthy market for laminators despite the fact that many UV printers are bought precisely to eliminate the need for laminating. But solvent printers continue to sell well and many of the prints coming off those continue to require lamination for weather and UV resistance, particularly for vehicle graphics. And of course laminates are desirable when it comes to adding texture to a print surface or to enhance the colours. And, in addition, they can be used to lay down application tapes and vinyls, without any need for squeegeeing by hand.

There’s still a choice between cold, single and double-heated roller laminators, with the most popular being the single heated roller models. These are more expensive than the cold laminators but will work with a wider range of media. The ability to apply a small amount of heat can soften the adhesive and achieve a better bond with the underlying print, with a faster turnaround time. The most expensive are those with two sets of heated rollers, which is useful for encapsulating prints, though this is a fairly specialised requirement.

Seal produces a range of laminators, including the 65 EL and 65 Pro MD launched earlier this year. Both of these are 1650mm wide and capable of laminating at a rate of 4.25mpm. The 65 EL is an entry-level cold roll model for pressure-sensitive media, that’s been designed to be easy to use. The 65 Pro MD is a top of the range laminator with dual heated rollers. It’s a solid machine with pneumatic roller adjustment requiring minimal maintenance.

Vivid sells a number of different laminators including its own Easymount range. Vivid has sold over 600 Easymount laminators in the last 12 months, with the best selling model being the EM-1600SH. This is a 1.6m wide model with a single heated roller. It uses an internal infrared heater and takes ten minutes to warm up to a laminating temperature of up to 60ºC. The full Easymount range includes cold and double heat rollers and sizes from 650mm to 2.1m.

There are also a couple of flatbed laminators, of which the best known is probably the Rolls Roller from William Smith. It uses a pressure roller mounted to a moving gantry, so the media stays still on the bed with the vinyl hinged around the roller. It’s quick and easy to use. There are five sizes, ranging from 2800 x 1450mm to the largest with a 4000 x 1700mm bed, as well as optional extension tables.

Earlier this year GPT launched a flatbed laminator, the LamiDesk, developed by the German manufacturer Llatec. This has a 1.6m wide bed and is available in two lengths of 3.5m and 4.5m. It has a motorised roller so it’s easy for a single operator to run high volumes through it.

There are also a number of liquid laminators around. Atech showed an interesting UV coater at Fespa 2013. The Burkle coater was originally designed to varnish rigid media up to 80mm thick. There’s also a Flex option for coating flexible sheets and an option to fit motorised unwind and take up units for handling roll materials. It can apply a coating with a thickness of between five and 30 microns at a speed of up to 25mpm.

Matic makes a number of automatic welding , including the Ares Plus, an impulse welder capable of invisible welds by adjusting the top and bottom heat settings to avoid a shiny finish. It can weld up to 6m in one stroke. It automatically folds the hem, which is itself adjustable from 20-90mm. It can even store the welding profiles for later use and can be used for both banner and textile welding.

There’s a semi-automatic model, designed to weld overlaps, hem pockets and zippers. It welds PVC, acrylics and textiles. There are three versions, capable of welding 3m, 4m or 5m in one stroke.

The Chinese company Utien produces the FMQZ automatic folding and creasing welder. It uses a two-sided thermal impulse welding system and is designed for making hems and pockets in banners. There are separate control systems for temperature and dwell times. It’s available in 1.2m, 2.5m and 3m widths and there are optional extension tables.

There are several different options for eyeletting, ranging from portable hand presses through to fully automatic eyeletting machines such as the PMJ279 sold by Hanolex. This is a bench-mounted machine operated via a foot pedal that punches a hole and simultaneously sets the eyelet without the operator having to handle any components. It’s used for 17mm eyelets and works with vinyl, plastic and leather.

Spandex sells the EP200 and 300 eyelet presses. These are pneumatic machines that can be bolted to a bench and operated via a foot pedal. They are suitable for banners, stiffer display materials, such as pop-ups up to 0.5mm thick, and substrates such as foamex up to 3mm thick.

The growth in textile printing has led to a corresponding demand for sewing machines, which can be used to create a pocket in the edges of a graphic, for example, to install the graphic into a light box.

Matic makes an automatic sewing machine, the Cronos V, which can be used as either a single or twin needle machine, and can quickly be changed from one to the other configuration. It’s a small machine, designed to be easy for non-skilled staff to operate, with a conveyor belt that moves in both directions and is synchronised to the sewing speed.

Typically, finishing equipment tends to lag behind developments in printers. But just as the printers have become more automated, so its inevitable that we will see greater automation in finishing kit, with an emphasis on cutting down the number of people needed to feed prints through these machines. We’re already seeing this with the cutting tables and the same is bound to happen in all areas of finishing.