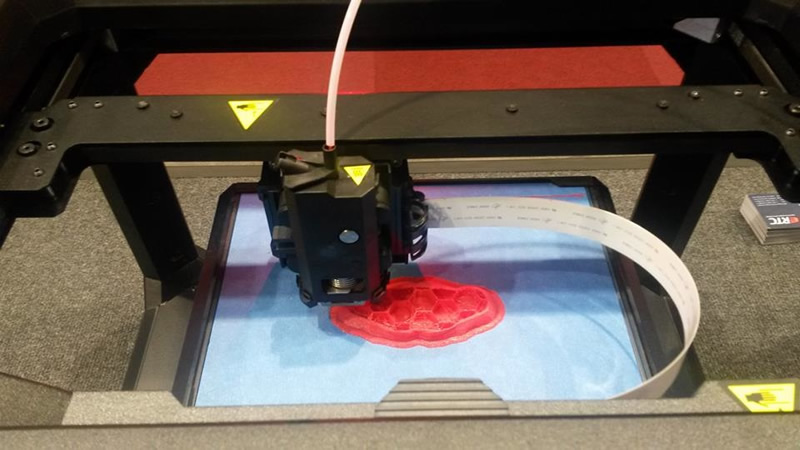 Don’t believe the hype. We’ve all come across that cliché. It certainly applies to 3D printing - although not in the usual way.

The hype doesn’t come close to conveying the potentially disruptive power of 3D printing. Here is a technology that can make replacement body parts, cars, spare parts for the International Space Station and, in China, 10 new houses in 24 hours.

The versatility of the technology should impress even the most sceptical wide-format printer: if 3D printing is already affecting aerospace, architecture, aviation, automotive, construction, defence, design, education, engineering, fashion, food, furniture, healthcare, manufacturing, textiles and toys, why should it not have an impact on digital printing?

The 3D print showcase at Fespa 2015 attracted many a PSP mulling over an investment and others simply fascinated by the rapid development of an exhilarating new technology that, like digital inkjet, uses jetting heads. The sense that here is a technology whose time has come has been reinforced by the exponential growth in the number of 3D printer suppliers – Stratasys and 3D Systems are among the leaders – and the fact that some traditional wide-format suppliers, notably HP (with a launch scheduled for 2016) and Roland, are diversifying into 3D printer manufacture.

Forecasting the likely impact of 3D printing from its current state of development could be about as accurate as projecting the future of the internet in the days of dial-up modems. The difficulty in getting an accurate fix, even in the short to medium term, is illustrated by 3D Systems’ recent refusal to give guidance on its likely earnings until it gets a better handle on the macroeconomic environment for the technology.

Although the roots of 3D printing stretch back to 1983 – American engineer Chuck Hull invented it, when he was looking for a new way to use UV technology to prototype table coatings – the technology is still relatively young. And Hull succinctly sums up the challenges his creation still faces: “The traditional limits of 3D printing have been: material properties, speed, making millions of things. But all the competitive companies are constantly pushing those limits, so if you’re projecting the future, those limits are going to be beaten down.”

As Hull suggests, these challenges are being tackled. Yet revolutions of this kind never run smoothly. Some major 3D printer companies are experiencing significant difficulties. Stratasys and 3D Systems enjoy billion dollar revenues but the former’s share price is languishing and the latter is tipped as a takeover target. MakerBot, the poster child for this revolution, is regrouping after its new printer head achieved a dire customer approval rating of 10%.

Such travails make it hard to predict progress, but there are some promising signs. Developed by US start-up Carbon3D, continuous light interface production (CLIP) uses chemical reactions to control the transformation of liquids into solids. Instead of slowly putting down a layer of material and then curing it, CLIP creates a monolithic product that is faster to make and materially stronger. Another new approach, multi-jet fusion, solidifies a plastic or metal powder with chemicals from 30,000 tiny nozzles at a rate of 350 million dots per second. Multi-jet fusion, a technology being used in HP’s 3D printer, could complete the curing process in a tenth of the time taken by desktop 3D printers and has the scope to allow users to change the material’s properties adding colour, elasticity, hardness and texture.

French 3D printing service leFabShop, which sells MakerBot and McCor 3D printers, showcases and shares innovative applications from the marketplace on its Instructables page including, notably, a DIY hydographic kit that transfers images onto a 3D printed object – like the shoes in the photograph.

The pace of change is exhilarating but also, if you’re contemplating investing, rather alarming. So it makes sense not to be too dogmatic about where this technology is heading or how quickly it will get there and remember that the technical possibilities – captured in the title of the Fespa talk by 3Dion’s Thomas Meurers: ‘3D Printing - The Limitations Lie In Your Phantasy’ - have to be seen in a commercial context.

So let’s explore some likely scenarios for the use of 3D printers over the next five to ten years - by people and businesses.

Millions of consumers will have as much interest in owning a 3D printer as they have in understanding quantum physics. But millions will want their own 3D printer to produce T-shirts or jewellery they’ve designed – or even, heaven help us, three-dimensional selfies. People who do this for a hobby might seem of little interest to wide-format printers, yet Digicopy, an Italian reprographics firm, makes money printing models on its McCor 3D printers that university students have developed for their theses.

Many - possibly most - consumers will prefer to ‘rent’ 3D printing capacity. With some user-friendly desktop 3D software they can upload designs on sites like Shapeways, which will print them and mail them back for a fee, or visit a store and pay for their job to be printed as they might for a photocopy.

The self-proclaimed ‘printrepreneurs’, artisans and designers who sell their wares online through sites like Shapeway and Thingiverse are of more interest to wide-format printers. They could be looking for companies to quickly, reliably, prototype their designs – or give technical advice. And if these ‘printpreneurs’ flourish, they may provide digital printers with a new customer base.

The scenarios for businesses are pretty similar. They can ignore 3D (perilous in some sectors, notably architecture, where early adopters could gain a significant competitive edge), buy printers or rent them - the latter option possibly opening up opportunities for wide-format printers.

When 3D printing was invented, it was known, more accurately, as additive manufacturing. The ‘Economist’ hailed this technology as a “third industrial revolution” that would render mass manufacturing obsolete. The publication has since changed its mind, noting that the finish and durability of some 3D printed products is not good enough and that 3D printers cannot yet “crank out zillions of identical parts at low-cost as mass-production lines can.”

Yet 3D printing is proving useful for such giants as Airbus, BMW, Boeing, General Electric, Ford and Siemens, is developing in intriguing ways - making it possible, for example, to print circuit boards directly onto mobile phones - and, given time, could still revolutionise manufacturing models. As the Atlantic Council think tank noted: “Printing a few thousand iPhones on demand (with instant updates or different versions for each phone) at a local factory that can manufacture other products may be more cost effective than manufacturing 180 million iPhones in China and shipping them to 180 countries around the world”.

With 3D print technology, you can make many kinds of products in the same factory. Bigger, more ambitious printing companies - that have decades of experience managing complex imaging technologies and the digital platforms that support them - could manage these factories. The question is whether PSPs have the expertise - or desire - to take on this challenge, and would offering such a service wreck their existing business model? It might be smarter for printers to help create and run more modest, targeted, in-house 3D print facilities.

A more selective approach might still prove reasonably lucrative for PSPs. They could sell 3D print capacity in the same way they offer wide-format services (though, in the early stages, they should proceed cautiously and respect the learning curve). Callprint, one of Britain ’s leading 3D print companies, has prospered by producing models for architects, construction companies and engineering firms. For wide-format printers with customers in these sectors, investing in a 3D printer could be a logical diversification. The Italian firm Digicopy’s success in producing 3D prototypes for customers in fashion and textiles indicates another opportunity. In the US, creatives have gleefully embraced 3D - print firms supplying British designers should take note. And in retail, where competition for shoppers’ attention in-store grows fiercer, 3D replicas or gifts could help brands stand out.

Wide-format printers cannot afford to ignore 3D printing. Yet that doesn’t mean they can’t afford not to invest in it. The decision about whether to acquire a 3D printer is not entirely about technology. The answer really lies with your assessment of your company’s culture and capability. Some businesses are more risk averse than others – and there’s no shame in that because many early adopters fail. You also need to gauge whether your customers are likely to be intrigued by - or indifferent to - 3D technology. Yet you might ultimately conclude that it is worth spending a few thousand on a 3D printer to give you a firmer sense of where this revolution is heading and what that could mean for you and your customers.