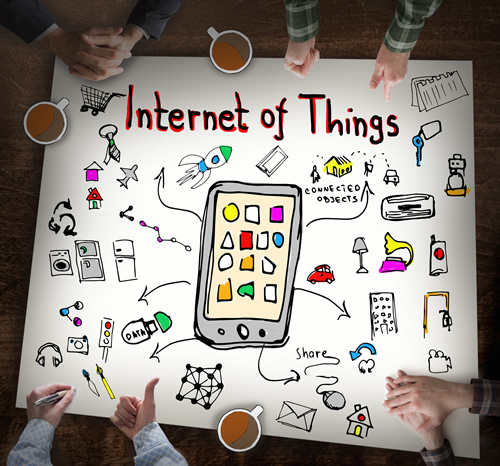 Walter Hale explains why you need to be keeping your eye on the Internet of Things.

Clothes that adjust to the temperature, vacuum cleaners operated by text messages and cars that drive themselves … these are some of the much-hyped innovations that could be spawned by the advent of the Internet of Things (IoT). Yet uber-management consultants McKinsey suggest that the media have misunderstood this revolution. Innovations aimed at the consumer generate plenty of headlines, but they argue that the IoT could have a more profound impact in the B2B world, where it will rewrite the rules of competition, create new business models, and transform the way companies use technology. To take one example relevant to wide-format printing, every printer could be fitted with sensors that predict when maintenance will be required and analyse workflows to improve efficiency. We’re starting to see the beginnings of it, but before we look too far ahead, let’s take a step back.

The phrase ‘The Internet of Things’ was probably coined by digital innovation expert Ken Ashton who told the ‘Radio Frequency Identification Journal’ in 1999: “If we had computers that knew everything there was to know about things – using data they gathered without any help from us – we would be able to track and count everything, and greatly reduce waste, loss and cost. We would know when things needed replacing, repairing or recalling, and whether they were fresh or past their best.”

Ashton’s vision is being realised, albeit slower than he - and many other experts - assumed. The multi-trillion pound IoT industry that many predicted still lies in the future. Wearables have not popularised IoT as forecast. The spotlight has now shifted to driverless cars, being tested by Google and mooted by Apple. Yet as one senior executive in the semiconductor industry said recently: “I don't think the Internet of Things has been overhyped. I just think widespread adoption will happen later than we expected.”

The delay hasn’t deterred Apple, Intel and the Chinese government – all of which are betting serious sums on the IoT. Indeed, some projections still say that, within five years, 20 billion ‘things’ will be connected to the Internet and that, by 2030, the IoT could be influencing half of the world’s economic output.

McKinsey defines the IoT as “sensors and actuators connected by networks to computing systems which can monitor or manage the health and actions of connected objects and machines. Connected sensors can also monitor the natural world, people, and animals.”

Put it that way and the IoT can sound rather like the mother of all management information systems. The difference being that this revolution does not need a manager to act on the information. The IoT learns and can respond accordingly. The principle of the fridge that knows when it has little milk left and orders two pints from a retailer on its network could as easily apply to a sensor monitoring media stocks at a PSP.

McKinsey, which has studied this issue for five years, says management need to look beyond single initiatives and imagine what a difference this revolution could make to the performance of their entire business. Using the IoT to manage the energy in your office could, they predict, cut usage by 20%. In production facilities, the IoT could improve productivity, maintenance and health safety and optimize inventories, facilitating a 10-20% fall in energy usage and a 10-25% rise in labour efficiency. Given the margins many print service providers operate on, such savings and efficiencies are hardly insignificant.

The IoT could transform the way print companies acquire technology. Suppliers might want to revisit the “as-a-service” approach in which they draw on a printer’s sensor data to charge for usage and have a contract with a printer that includes service, maintenance and upgrades. This would tie a supplier more closely to a print company, make it harder for rivals to steal the business, and give them more accurate information about usage and performance to influence future designs.

Louis Gordon, marketing communications manager at Landa Digital, is certainly excited about the IoT’s potential. “In the not too distant future, most every device in a printing operation will be on the IoT grid,” Gordon writes in his blog. “A major beneficiary of the IoT will likely be workflow optimisation. Every press, front-end device, finishing machine, management system, and computer will be on the Net. The same goes for your utilities. In theory, an IoT printing operation could automatically monitor press status, energy use, maintenance needs and troubleshooting issues with far less human intervention. The effects will not just be felt under one roof, but across all the buildings you operate, anywhere in the city, country or world.”

The promise of the IoT is immense but some barriers still need to be overcome. The cost of core components - low-power sensors, radio-frequency identification (RFID) tags, battery power, communications links, computing and storage - must keep plummeting. The IoT systems need to be open, interoperable, and secure - you don’t hackers to take control of your digital press. All relevant parties need to agree on intellectual property. For example,

does the data your business produces from using a laminator belong to you, your supplier, or both? As with all technologically driven revolutions, businesses need to keep a sense of perspective. As Epson’s Rob Clark has pointed out in a thoughtful blog: “Imagining every single possible device and sensor available and trying how to work out how they could be employed in your business is the wrong way to do it. Instead, limit your view to the data your business actually requires. Also, keep in mind that how your business already makes its decisions will dictate what data you require and how you take your first steps into the IoT.”

How your company makes decisions is the crux of the matter. PSPs have been using management information systems for decades. Yet many suppliers privately admit that few print companies are using these systems to their full potential, preferring to rely on traditional practices, past experience and gut instinct.

Print is hardly unique in this respect. McKinsey notes, for example, that a typical offshore oil rig is fitted with 30,000 sensors, yet only a small fraction of this data is used to inform decision making. At this point of time, McKinsey estimates, companies are typically making use of 1% of the data they collect. If that’s the case, will the volumes of new data generated by the IoT really transform the way companies work?

If the IoT is to make a difference, Theo Priestley has written in ‘Forbes’ magazine, we need to forget our obsession with the size and scale of the internet and focus on relevance: “Unlocking value and relevance may be the tricky part. You may not be aware of the relevance of the data you possess because the information to put it all in context isn’t clear or immediately apparent. So how can you look for it? And how does someone else, who may need it for their decision making, find it?”

Priestley says companies may fall foul of a phenomenon known as the ‘Relevance Paradox” in which, unaware of the essential information that would help us make better decisions, we seek only the data we think we need, rather than the information we need to fulfil the organisation’s goals. To avoid this in the IoT era, Priestley says data must be available in real-time, easily and in-situ, through computers, laptops, tablets and smartphones. So PSPs may do well to heed Clark’s advice. By focusing on the data that is crucial to the running of their business, managers will find it easier to locate the relevant data, analyse it and use it to guide their decisions. Companies might also need to strengthen their IT resource. In an IoT world, IT is no longer a narrow specialisation, it is embedded in a company’s physical assets and inventory and has a crucial role in measuring business performance.

As IoT develops, it could help give you an accurate, unbiased picture of the state of your business, cut the cost of energy and downtime, make your staff more productive and - who knows? - even change your business model.

The revolution hasn’t started - yet. As Landa’s Gordon notes in his blog: “The IoT era is in its formative stage. We’ve yet to hit feeding frenzy. So there’s no need to run out this second to get your business connected to the IoT. It still might be wise though to pay close attention to this particular megatrend. Things are happening very fast.”