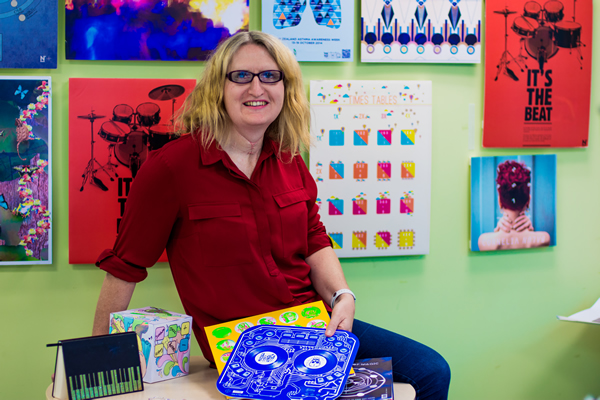 Walter Hale explores the integration of music, video and other electronics into print.

Four years ago, a one-year-old child became an internet sensation by pressing a magazine as if it were an iPad and looking nonplussed when her prods and swipes had no effect. In an age of iPads, iPhones, iWatches and iEverythingelse it is easy to understand why the print medium is regarded as horribly one-dimensional and why it has become fashionable to declare that this form of physical content is dead.

Luckily, some companies are determined to prove that print is not dead, it just needs reinventing – and their message is being heard by a growing number of customers. Printers and publishers have been trying to add dimensions to print for decades. Some of these attempts were ludicrously gimmicky – in the 1980s, some magazines were given a fragrant coating in a craze called scratch and sniff which resulted in the unfortunate cover line: “Now you can smell Joan Collins!” Thirty years later, the reinvention of print is more ambitious, creative and intelligent. Two very different companies exemplify this reinvention: Talking Print and Novalia.

Let’s start with Talking Print. The company was founded in 2011 and managing director David Hyams sums up the company’s philosophy saying: “Our whole ethos is that we are up for a challenge. People just throw things at us and we come up with solutions.” This approach seems to be working: clients have included Gieves & Hawkes, Paddy Power, Samsung and Prestbury Investment Solutions, the property company tasked with selling the iconic Madame Tussauds Building. Talking Print’s those solutions have varied from the relatively straightforward – audio Christmas cards – to the seriously challenging, such as proving that it was possible to insert audio into a Dairylea cow so that it mooed when the fridge door opened. “A lot of our work is proof of concept,” says Hyams. “When agencies want something, they want it now, and we help a lot of creatives with iterations to prove their ideas will work, so they can pitch it to their client before it goes to market. In this case, if the cow mooed when they opened the fridge, the shopper won a holiday.”

Hyams started out as a graphic designer who became intrigued by digital printing and the possibility of doing new things with print. That curiosity has served him well as managing director of Talking Print: the business has flourished by showing marketers and printers what can be achieved if you combine print with audio or video or both. Although every product is bespoke, the modules the company uses are bought in from China and, if the print run goes beyond 50 units, it will source production there. “There’s a tradition for companies who place work in China to get into a bit of a mess. Getting stuff printed there is one thing, getting it shipped back quite another. We are the conduit to getting these jobs manufactured. We take the mess out of it.”

The one market Talking Print hasn’t cracked is wide-format print and particularly point of sale. Yet Hyams is optimistic that this will change. “We have had lots of discussions about this, but the stumbling block has always been how you would power, for example, a sign with video in? In store, they don’t want to give you one of their precious plugs. There are ways to get around this – we’re looking at batteries and motion sensors so the videos aren’t always on – and we’d love to do it.”

The job that probably best encapsulates Talking Print’s capabilities is the bespoke video brochure it produced for Prestbury when it was asked to sell the Madame Tussauds building, a job which upped the game when it came to delivering marketing collateral for the property sector. The brief was to incorporate a video into the sales brochure that could act as a standalone element. The video had to work at a screen size of just 10inches and operate in stereo audio. The box containing the video brochure and, among other things, a waxwork model of the property was, in Hyam’s words, “almost a work of art in itself”. The whole job had to be produced on a tight time frame and be of the very highest quality. The sales tool obviously worked because the building was sold to a Taiwan insurer for £340m after three months.

There is nothing fancy about Talking Print’s website, and the videos of their applications posted on YouTube and vimeo have a simple, homespun charm. Yet don’t be deceived. Hyams is quietly fearless and one of the reasons they won the Madame Tussauds job was because they were one of the few suppliers who were completely unfazed by the client’s raft of demands. Talking Print’s work may often end up inside a box, but they have prospered by proving they can think outside it. Kate Stone, Novalia’s chief executive officer, shares Hyams’ belief in the charismatic physicality of print, but her reinvention of print has very different roots. A former sheepherder with a PhD in physics and micro-electronics from Cambridge, Stone worked for a Cambridge start-up dealing with printing transistors and became fascinated by print as a manufacturing process, so fascinated that she installed a flexo press in her garage. As she puts it, “I bought a flexo press, experimented with it and made a mess of it.” This sounds like a self-deprecatory anecdote but is actually a good example of the modus operandi that has served her so well since she founded Novalia in 2004. “I’ve never been like those start ups with a business plan that shows they will change the world in five years. My question is: ‘How do they know?’ I’m more interested in not knowing, in exploring and seeing where that takes me.”

The constant in Novalia’s work is its desire to create an interactive world by combining traditional print and conventional electronics. Yet not knowing – which means, as she puts it, exploring, listening, going on a journey and learning from “the collective consciousness” has taken Stone in some intriguing directions. Her company developed an interactive conductive print brochure for Audi, an outdoor playable poster for Beck’s beer and a double gatefold album cover for DJQbert that feature fully functioning DJ turntables on the inside. The latter project was particularly satisfying for Stone, Invited to speak at the TED conference, she wanted to develop a prototype in two weeks. Her engineers said it couldn’t be done, but it was. The prototype was not perfect but with such innovations, Stone says: “I don’t do the technology in the complete way that a scientist or an engineer might do it. I’m more interested in creating and enabling the experience and the faster I can do that, the sooner I get feedback and the faster I can learn and improve.”

The DJQbert album cover is a near perfect illustration of Novalia’s ethos which Stones describes as “working at the interface of digital and physical, putting the digital DNA into beautiful physical objects which have intuitive touch, connectivity and data and are manufactured by processes such as regular print.” The use of standard processes and materials represents Novalia’s continuing resolve to keep things simple, so that the ideas and applications can spread beyond the company.

One of the most significant recent innovations is the development of a kit consisting of a printed touch sticker, press on control module and software tool which companies can buy to add interactivity to their print in four simple steps, without worrying about programming, messy inks or soldering wires.

The printed touch creator kit is significant in itself but also as a pointer to Stone’s unfulfilled ambitions. Why not, for example, create an app so that anyone with a smartphone could make a piece of print interactive? There is also, she says, more to be done by combining the power of the internet to print. Novalia has already developed a poster you can play the drums on, but what about taking that further – so that if someone plays the drums on a poster in London that sound is heard on a poster in New York?

Stone has become one of integrated print’s most charismatic ambassadors on the conference circuit. In part this is driven by her aversion to old school selling. “I don’t do cold calling and don’t really know what a conventional sales process is. We put ideas out there and people come to us. And I’ve learned, over the years, that silence is a good thing. Once you’ve shown people something outside the box, you need to let those clogs tick in their brains.” Her high profile has also helped her share her long-held dream, one she has begun to turn into reality, of delivering experiences with paper and print that will enchant a one-year-old child from the iPad generation.

Kate Stone’s Talking Point interview can be found at (http://www.imagereportsmag.co.uk/videos?start=4)