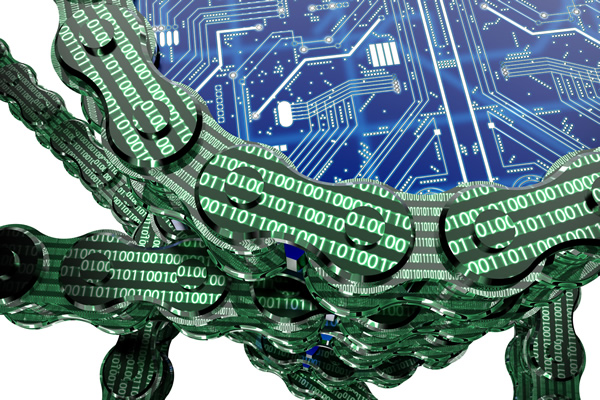 With blockchain, invoices can be settled almost instantaneously. Interested? Walter Hale explains the technology that has everyone talking.

Blockchain is not an easy thing to explain. The BBC, in its ‘how to’ guide to the technology that enabled the digital currency Bitcoin, felt obliged to reassure users that it had nothing to do with cycling. Asked to compare blockchain to previous leaps in innovation, Aeron Buchanan, a developer at Ethereum, one of the companies pioneering it, replied: “I know this sounds rather dismissive but it’s like asking if, during the development of the airplane, there was something else similar? Otto Lilienthal’s gliders were an inspirational basis for the Wright brothers’ powered flying machines, but does it help to say that Lawrence Hargrave was flying kites at around the same time?”

The best place to start is to explain how does blockchain works? Blockchain is a method of recording data - a digital ledger of transactions, agreements, and contracts - anything that needs to be independently recorded and verified as having happened. This ledger isn’t stored in one place; it’s distributed across several, hundreds or even thousands of computers. And everyone in the network can access an up-to-date version of the ledger, so it’s pretty transparent.

Digital records are lumped together into ‘blocks’ then bound together cryptographically and chronologically into a ‘chain’ using complex mathematical algorithms. Encryption - or ‘hashing’ as it is called - is performed by many different computers. If they all agree, each block receives a unique digital signature. The details of the transaction are not stored - just the fact that it happened, and the encrypted record of the transaction. Once updated, the ledger cannot be altered or tampered with, only added to, and it is updated for everyone in the network at the same time.

Because a blockchain database is distributed, it’s much harder for hackers to attack - they would have to simultaneously break into every copy of the database. Don Tapscott, co-author (with his son Alex) of ‘Blockchain Revolution’, has said: “Hacking the blockchain is many orders of magnitude harder than hacking the CIA. It would take the power of 100 Googles.” (There have been some Bitcoin thefts but Tapscott is basically correct to say that hacking Blockchain is exponentially harder than attacking a company’s servers.)

It also keeps data secure and private because the encrypted file cannot be converted back into the original data - it’s a one-way process. So if the original document or transaction were altered later, it would create a different digital signature, alerting the network to the mismatch. In theory then, the blockchain method makes fraud and error less likely and easier to spot.

Because the technology effectively establishes trust, for the first time in our history, the parties to any transaction do not have to know - or trust - each other. The upshot of this, Tapscott argues, is “In practice, we have a platform where literally anything of value - stocks, bonds, dollars, art, intellectual property, licensing rights, titles, deeds, even votes - can be moved, stored and managed securely and privately managed without the need for a third party.”

So what kind of worlds of possibility does this open up? If you look at the bigger picture, we could end up living in a world where cash doesn’t exist, houses can be bought in minutes and a global platform harnesses collective intelligence - the wisdom of crowds - to predict the outcome of future events.

Some of this will never happen. The inevitability of the cashless society was predicted as long ago as the 1960s when consultant John Diebold declared that “transaction overload” meant that the “cashless society is no longer an option but a necessity”. It’s possible that, as some predict, cash will be obsolete by 2030 - yet, as with the paperless office, some suspect this transition will never be completed.

There are also some hurdles for blockchain to overcome. The alacrity with which venture capitalists are investing in anything connected to blockchain - some $474m was poured into this technology last year - does run the risk of another dot.com bubble. Managing these databases takes a lot of power and complaints about slow transaction speeds have already surged to record levels. Yet every disruptive technology has issues to deal with and these challenges should not blind us to Blockchain’s potential.

And the possible applications for digital print are, to say the least, intriguing. Disputes between print service provider and customer - and between print service provider and supplier - could be dramatically reduced, if not eliminated, by smart contract programs. These programs would automatically verify that contract terms have been met and authorise payment - all in real time without any middlemen intervening.

They could also be used to track orders: for example, one wine retailer is thinking of using blockchain to continuously measure the temperature of humidity and wine and, if they fall below agreed levels, cancelling the order.

One application that has obvious relevance to digital print is tech company Everledger’s system of warranties with which mining companies can make sure that their rough-cut diamonds are not being used by militias to finance their wars. Six months after it started, the database has stored the details of 850,000 diamonds. Why couldn’t printers use similar systems to verify the fact that their paper is from sustainable sources? That every part of their second-hand printer is completely bona fide?

Given that the technology effectively establishes trust, print companies on the same network could use blockchain to rent out their press time to each other to cope with unpredictable spikes in demand. At the very least, it could help codify and clarify the details of any sub-contracting and, with few print service providers, able to offer customers a completely comprehensive service, blockchain could inspire greater collaboration across the industry. One big boon: with blockchain, invoices can be settled almost instantaneously.

Yet for visionaries like the Tapscotts, the blockchain revolution could have far more radical consequences. There is a lot of talk about the sharing economy but, underneath the hype, there isn’t that much sharing going on. A company like Airbnb makes money because it creates a network, charges a service fee and sell products and services. Imagine an Airbnb which is actually a co-operative owned by the people whose homes and flats are on the network – and the travellers who use it. Blockchain software would effectively carry out most of the functions currently performed by a $25bn business.

It is possible to imagine businesses being created with thousands or millions of owners, some of whom may have invested less than £1. Rather than following the traditional hierarchical model with full-time employees, this new business could act as what is described as a Distributed Autonomous Organisation, paying people for specific pieces of work, using software to perform the most basic tasks we associate with a company and turning to the free market to buy services and skills as required. In that way, it is almost the second coming of the outsourcing revolution.

“In the long term, there’s no reason that all of these tasks need to be carried out by the same company,” says Ben Doernberg, a bitcoin expert at Harvard University’s Berkman Centre for Internet and Society.

“A designer in Brazil can build a lovely mobile app that sends your ride request to a matching engine in San Francisco that pulls security ratings from a blockchain-based decentralised identity system. If someone in Chicago makes a better matching engine, Uber switches over without missing a beat.”

For younger entrepreneurs, blockchain could provide a historic opportunity to build a completely new kind of business. For established print service providers, it could, at the very least, offer significant incremental benefits. The potential is enormous - which is why so many corporate titans as diverse as Goldman Sachs, IBM and the New York Stock Exchange are all investing in it. Consumer goods companies are exploring whether it could facilitate 3D printing of their products - and do so in such a way that it prevents counterfeiting.

Yet right now, it might be wise to heed the advice of Peter Loop, head of innovation and disruptive technologies at Infosys Finacle, who told the BBC: “Blockchain as a commercial technology remains on an unclear path. But it’s coming quickly. It’s not ten years away, it’s coming within a few years.”