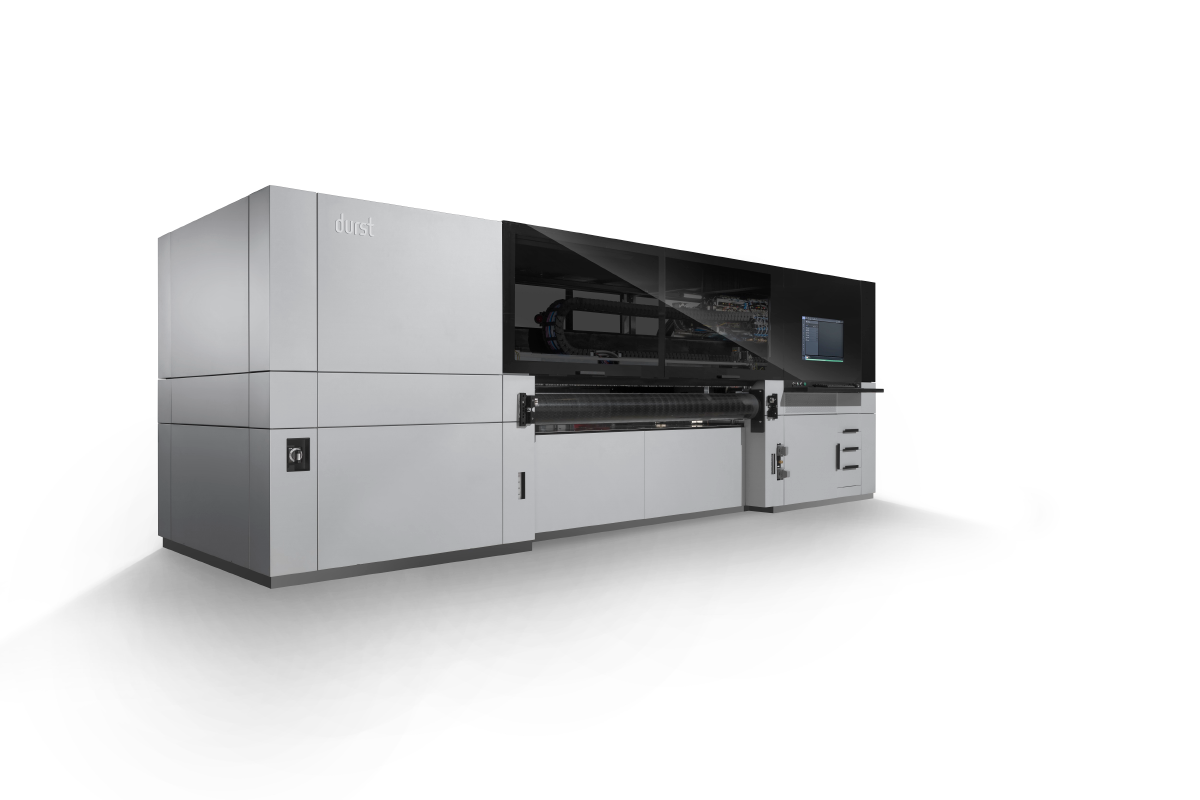 The first of Durst’s new p5 printers is due to start shipping. So what’s so novel about this technology?

Durst ran a teasing social media marketing campaign ahead of its P5 launch in February. But is the technology as clever as the marketing campaign surrounding it? Unveiled at its Lienz site in Austria to a select group of Durst customers and prospects - and to journalists - the 250HS is the first in a series that will include the P5 200HS, 320 and 200. The flagship 250HS is due to start shipping this month (April), followed later this year by the 200HS and 320 (roll/rigid hybrid). The 200 will be introduced soon after.

According to CEO Christoph Gamper: “This is best in breed technology utilising all our years of knowledge and responding to customer requirements.”

Based on the Durst P10 250HS, the P5 250HS is 70% faster, boasts a 20% increase in resolution, a 80% decrease in printhead maintenance, and 40% quicker media changing. It has a top resolution of 1200dpi, with a drop-size of 5pcl. In two-pass mode the P5 250HS can run at up to 240m2/hr and is targeted at those wanting to handle high volume production as well as bespoke runs in offset quality.

“P5 represents a new level of customer co-operation at Durst. We have a reputation for being secret but P5 shows we are opening up, addressing customer needs and integrating at a much earlier stage,” said Barbara Schulz, EVP sales, at the launch, held at the Lienz plant because that’s where all the P5 printers - bar the P5 320 - will be built. The latter, being a roll/flatbed hybrid, will be built at Durst’s Brixen plant.


A design studio from Munich canvassed opinions from customers and operators with a view to integrating their wishes into the new P5 concept. The result was five key areas of development, which the name ‘P5’ reflects: productivity, reliability, workflow, versatility and print quality.

The new printers have specially developed Durst printhead arrays built with Fujifilm Mems nozzle plates (designed for 24/7 production), use new inks (P5 Premium WG ink and P5 POP HS ink available initially with other inksets under development), have a new media transport system (with gearless direct drive for precision, 16 vacuum chambers and a special synthetic coating to prevent static friction), and incorporate a key software development - Durst Symphony, which comprises a new touchscreen icon-based user interface, a workflow suite of applications (with features beyond Ripping such as print data management and versioning and customisable colour management), and an analytics platform for pre-emptive maintenance and detailed machine and consumption data.


Durst will not be at Fespa 2018, preferring to show its new technology to potential customers at its Austrian bases. The first customer orders have been taken though names not yet released at the time of going to print. But Durst is obviously keen for the P5 technology to open up new customer bases.

“The P5 platform, including workflow software and advanced service tools, represent our key strategy to further invest into large-format printing technology and further afield,” says Gamper. “We believe there is a lot to explore in this market space and the P5 250HS is our firs statement. In an integrated world printers need to change as well. With the P5 family we provide tools for change and profit.”