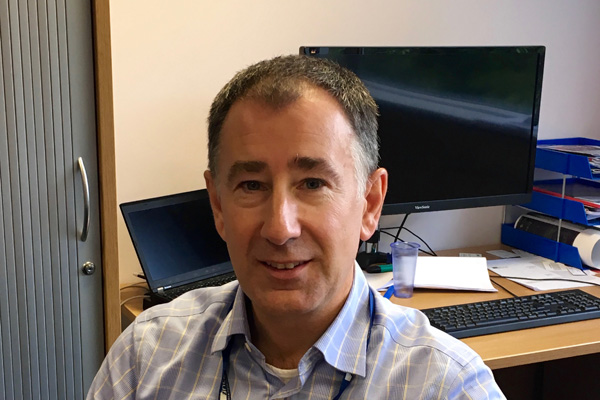 John Mills has said it himself - industrial print is where it’s R&D focus now lies, currently taking up more than half of the company’s £8m annual spend, and set to take a bigger proportion going forward. So what does that say about Inca’s commitment to its graphics arts customers, who currently account for 90% of its £40m turnover?

Well, the reality is that while large-format PSPs are far from forgotten - we can expect to see new UV machines for printing small format objects for instance at Fespa 2017 - the Cambridge-based company sees its real growth coming from the industrial sector.

According to Mills, Inca “expects turnover to be £60m in three years, 30% of which will come from industrial print”. And by ‘industrial print’, he means “where the print produced hasn’t got a value on its own – like a printed sign or whatever, whether that be printed on vinyl, metal, glass etc. By ‘industrial print’ I mean areas where print is just part of the process of making something that has a function in its own right – kitchen splashbacks, printed fridges etc.”

The drive towards industrial is hardly surprising given Inca’s ownership, since 2005, by Screen, which is somewhat focussed on implementing ‘Challenge 2016’, explained on its website as “a management plan for the fiscal 2015 to 2017 period, in conjunction with which we will undertake various management reforms designed to enhance Screen's overall corporate value.” Inca’s board is made up of four Inca people and four Screen, and Mills says that though it is pretty autonomous in its day-to-day running, there is much more involvement from the parent company in terms of strategy, though that’s hardly to be eschewed. “We are valuable to each other. They have a CTP background and need to replace revenue levels while we have technological knowledge that bring huge opportunity. Screen has given us access to cash and capital that wouldn’t otherwise have been available to us – R&D spend has tripled since I joined as CEO in 2013 – which means that we can develop areas like single pass technology.”

Plenty of work is being done in that area, but Mills doesn’t see it making great inroads in ‘traditional’ large-format – rather more in industrial print.

“With single pass the problem is that all the drops get put down together and want to merge. We can solve that by staggering the drops, using coated substrate, changing the chemistry of the ink etc. It’s about pulling together all the strands to make a workable process and system. Inca has always been known as a flatbed company. What we will become known as is an integrator. It is crucial that we work with collaborative partners to produce the types of system that will be demanded by industry.”

It was with this plan in mind that Inca formed Inca Genius last year, effectively the industrial print applications side of the business – charged with working with printhead and inks manufacturers to design solutions for end clients.

Mills says the company is currently working with around a dozen partners and that the work undertaken over the last 18 months or so means “that if somebody now asks us for an aqueous UV solution we sort of know the basic parameters now, so the timeframe of getting a workable process for a specific industrial application is speeding up.”

But that’s not to say it’s easy, or cheap. “If someone comes to us and says they want a 1m-wide printer in five years to do X, if they haven’t got a £20m budget to get there they’re not realistic,” says Mills. He points out that the actual cost of the printer is somewhat inconsequential – it’s getting to that point that drains the funds.

“The challenges in industrial will expand as the market/applications expand. We have already done so much development in large-format flatbed systems/machines that we have the platforms and engineering capability in-situ. It’s now about integration.”

On the single pass development front Mills says of the printhead technologies available from Fujifilm, Kyocera and Xaar, “I’m not sure one will win out. I think they will all win, and we’ll use whichever suits an application’s requirements. In terms of wide-for POP we’re happy to stay with the Fuji Dimatix heads, though we could use whichever we want.

“The question really is about who can provide the most reliable range of fluids, so we’re working with ink companies. Logically all this development in the industrial end of things – under the auspices of Inca Genius – will mean that takes up a larger proportion of R+D spend in the future.”

As already mentioned, Image Reports readers are unlikely to see much of a benefit from this single pass development focus. “I don’t really see it taking off in the POP market. Single pass has a limited range of substrates because of the amount of ink put down at one time. If you’re printing onto something like corrugate board – where image quality is also not so much of an issue, and volumes are high – then it makes sense. But for short runs, where you’re using a broad range of substrates? I can’t see how a PSP could make that work economically.

“Even for industrial customers, they need to come to us with a workable business model before we’ll start doing anything. It’s important to fully understand how the economics of the technology you’re looking to employ will work in your specific operation.”

Understanding the economics of how systems work is as crucial for Inca as any other business. Creating an effective and efficient sales channel is one system that has come under the spotlight of late, having recently appointed Perfect Colours as UK distributor for its new Inca SpyderX dual flatbed/roll-to-roll printer (effectively the Trepress that Inca developed for Screen).

This is the first model to be sold through Inca’s reseller network, which at the time of going to press also included Schneidler Grafiska in Sweden, and Digital HiRes in Spain. “When I joined I decided that we had to diversify our sales channels,” says Mills. “By the end of 2016 we should have all of Europe covered and will establish a network further afield too.”

He said there are no plans for Inca (which also has a US support operation based at the Dainippon Screen facility in Chicago and a service and parts operation in Singapore) to use its new sales channel to sell the Onset X Series currently available exclusively from Fujifilm - with which Inca has a long-term relationship. Not does Fuji supply Inca with Dimatix printheads, but it has since the early days (initially as Sericol) manufactured the UV curable inks used in Inca’s flatbed machines.

“The Onset X just needs a level of support around the world that would be too costly and unprofitable for Inca to supply,” says Mills. “Fuji can do it more effectively – and I can’t imagine not working closely with Fuji. But, we’ll put more smaller cost products through our own channel”

That could well include the new large-format UV machines for printing small format objects expected to be unveiled at Fespa - watch this space!