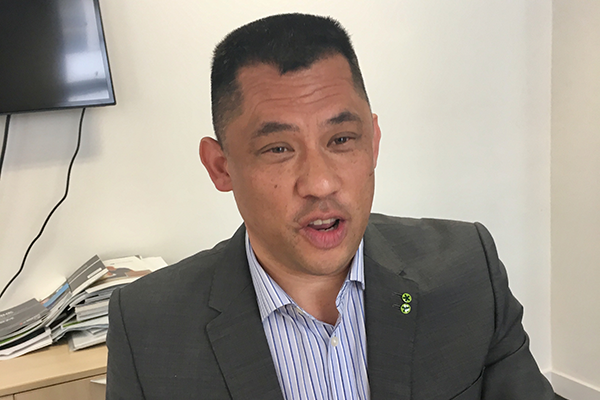 The Kongsberg finishing table is the product everyone recognises from the Esko stable, but can you expect more than go-faster machines in a race to provide PSPs with better integrated workflow solutions?

2017 marks 15 years since the birth of Esko, and six since it became a member of the Danaher family - a ‘global science and technology innovator’ with more than 20 operating companies that ‘transform the fields of diagnostics, life sciences, dental care, and environmental and applied solutions…. to improve the quality of life around the world’.

According to Stuart Fox, director of digital finishing for Esko - the Ghent-based supplier of ‘integrated solutions’ for the packaging, labels, sign and display industries and best known to us for its Kongsberg cutting tables - being part of Danaher is like ‘being part of a family where we all come round for dinner and share experiences”. It’s a big family - revenue for the year to the end of December 2016 was $16.9bn, with net earnings of of $2.2bn.

Esko (which includes Enfocus and MediaBeacon), together with other familiar companies such as X-Rite, Pantone and Videojet, fall into Danaher’s ‘product identification platform’ group (PID) - itself part of the parent group’s ‘Environmental and Applied Solutions’ division and which includes ‘water quality’ companies too. Esko president Udo Panenka reports to Joakim Weidemanis, who oversees all PID activities but, as Fox points out, all subsidiaries “run on their own as profit centres [figures are not public], but the Danaher Business System is in effect a massive toolbox that all can use. The experts within the Danaher companies are the ‘tools’. The expectation is that we have open relationships with each other and that we share knowledge.”

Once a year that knowledge sharing takes the form of an innovation week, whereby Danaher companies share best practice, but the philosophy extends well beyond the confines of the group itself. A ‘user experience DNA’ project that started two years ago now, “has been a revelation” according to Fox. “Instead of us coming up with ideas internally, we go out and see customers and ask them how they operate and what would make their lives easier. We talk to a range of people at a company, from the MD to machine operators, the production manager etc. That way we get a proper overview of how we can develop solutions to help.

“When we kicked off that programme we undertook 1,000 ‘experiences’ and from that prioritised a list of ‘wants’. Our last Drupa releases were based on the market’s top requests – easier usability, more intuitive interfaces, higher throughput etc. Out of that came things like our Device Manager.”

Out of that also came ‘Value Stream Mapping’ or ‘VSM’ - a programme that has Esko people go into PSPs for a few days to identify their business goals. “I’d say most small sign and display companies are interested in us undertaking this kind of process - which is free to them because we’re gaining as much insight as they are,” says Fox.

So how is this grassroots input impacting Esko development? Fox says around 30% of Esko’s 2016 turnover came from Kongsberg sales, around 28% from hardware (like its CDI flexo imagers) and the rest from software. “I see Kongsberg will grow to become a bigger proportion of turnover,” he adds, and points out that sign and display rather than the packaging sector is expected to be responsible for that.

While corporate literature describes the PID group as ‘serving the packaging value chain from concept to consumer’, Fox points out that the onus on packaging is shifting somewhat. “A few years ago it would have been a 70/30 split in favour of packaging customers. Now it’s 50/50. Packaging is a massive market, but it moves in a much slower and conservative manner than sign and display. When I joined the company in 2010 packaging was very much Esko’s focus, but that has changed and the focus now is more on sign and display.”

Pressed about integrated systems developments and what that means for Esko’s focus on software, Fox says: “Digital finishing is a beautiful part of our business, and the market is growing. However, software always has a higher gross margin [than hardware], and we want to ride both waves. The thing is, connecting our hardware to the whole workflow is where the opportunity lies. Esko is now looking at R+D more holistically – from the point of view of finishing in relationship to total workflow, MIS etc, rather than just about how we make the blade cut faster. So for instance, Device Manager will be developed on. It connects to Esko kit right now, but the intent is to add other printers from other manufacturers – perhaps within six months to a year.

“Neutral is how I’d describe our systems approach. Five or six years ago we’d have had a bespoke team working on integration of our own products. Now it’s all about open architecture.”

And what about automation, an area Esko spotlighted back at Drupa with its robotic finishing system for corrugated. “We’re continually developing robotics for all materials handling, and looking at handling on a smaller scale for customers in sign and display rather than packaging, who want to be able to go away and leave things running,” says Fox, pointing to the new feeder/stacker arrangement launched at Fespa 2017.

At Hamburg, the Kongsberg C60 was table shown with a small footprint, automatic feed and stacking system - which can fit to any Kongsberg C unit. The system is modular so PSPs can install the feeder first, and add the stacker at a later date.

Of course automation is about connectivity as much as anything else, and Fox is eager to acknowledge that managing data-flow throughout a PSP’s business is crucial “so that it doesn’t lose its integrity as it goes through the system, via rekeying or whatever.” And he’s well placed to outline Esko’s policy of the matter, given that he heads up its ‘Go To Market’ unit.

“This is a team that acts as the glue in terms of customer requirements and our product development,” Fox explains. “The intention is to fully understand what the customer wants, what we should be developing, and where we can sell our solutions. We have an international team - which was formed two years ago – so we get a proper geographical view of product possibilities in each market.

“The idea is simple. We will go to customers and talk to them! We may take a product idea and ask if they would buy it. If not why not etc. Then we come back to Esko with a business plan for the product. What might work very well in one area may not in another, so it’s a valuable exercise, for Esko, and for our customers.”

It will be interesting to see how one of Esko’s latest developments plays out in the market. The company, which acquired MediaBeacon two years ago, has just released a jointly developed integrated packaging and marketing process and digital asset management solution to help brands and marketers deliver consistent content across digital, social and packaging consumer touchpoints - a move driven by customer conversations over the last few years.