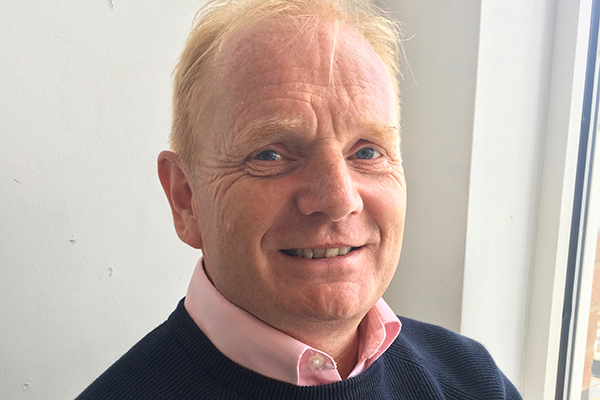 Agfa is starting to sell it’s own branded large-format media in the UK, but what other strategic developments should we expect from the Belgian-based group?

You might perhaps best recognise Eddie Williams as MD of Litho Supplies. But, since April this year he has also been MD of Agfa’s UK and Ireland business. Given that Agfa has owned Litho Supplies since 2011 it’s perhaps not surprising to hear that the distribution business is involved in the strategic development of Agfa’s media sales. Agfa has a huge media sales operation in the US, selling third-party made materials under its own brand. Now the UK and Ireland is getting in on the act, with Litho Supplies starting to distribute Agfa branded banner and self-adhesive vinyls - a nice fit given that it already sells Agfa’s inks in its consumables offering.

Williams admits that Agfa is somewhat late to the party in terms of large-format media supply here, blaming “a lack of focus and distribution.” But he adds: “At the end of the day, Agfa is a consumables business, and the one-stop-shop concept is what we’re aiming at. I’m a sales guy, and top line growth is my focus.”

Indeed, top line evolution of the business is a key focus for Agfa Gevaert overall. The Belgian-based group’s 2016 turnover amounted to 2,537m Euro, down 4.1% (3.5% excluding the currency exchange rate impact), but Williams says “the revenue trend started to improve towards the end of the year. As a whole, Agfa-Gevaert brought its recurring EBITDA margin above 10% of revenue. Furthermore, our strong focus on cashflow generation enabled us to turn our net debt position into a net cash position of 18m Euros. These two achievements will now allow us to shift our focus towards the top line evolution of our businesses.

“Comparable to what we did a couple of years ago, when we started our gross profit margin
improvement programme, we have initiated several top line projects. With these projects, we aim at resisting the decline of our traditional businesses and at boosting the success of our growth engines.”

So where are these growth engines? Well, healthcare and speciality products, two of the three Agfa Gevaert business sectors - graphics being the other - are expected to do well as the markets develop and Agfa technologies continue to penetrate. In the last financial year healthcare represented 43% of group turnover, and speciality 7.1%, together just marginally topping the 49.9% contributed by the graphics business.

In terms of profitability though, healthcare takes a bigger slice of the pie than graphics, which is nevertheless not doing too shabbily. Agfa Gevaert’s total gross profit rose nearly two percent in 2016 to 33.8% of revenue, the highest level since 2010 (it posted a net profit of 80m Euro). Healthcare’s gross profit margin grew by two percent to 39.9%, while graphics grew from 28.3% of revenue to 29.8%.

Cost-cutting measures across the global graphics business saw Agfa “take people out, the closure of a plate factory in Italy and efficiency savings top to bottom,” points out Williams, upbeat about the division’s future within the group. And here’s why.

In 2016 Agfa’s group R&D spend was 141m Euro - 5.6% of revenue. The global graphics business accounted for about 30% of that, but as Williams explains: “R&D expenses relative to the revenue is a changing number. Obviously for new industries and new technologies (like ink development and wide-format printing) the number will be relatively high opposed to consolidated product lines. This may change depending on technical demand and market evolution.”

At the moment the global market looks like this for Agfa Graphics: 60% of the division’s turnover comes from commercial print/newspapers, while the other 40% comes from software, Cloud/mobile services - and inkjet.

Europe is the biggest market for Agfa Graphics (the UK being number two after Germany) followed by the US. But Latin America and Asia are growing - and Williams says that pattern is reflected in its sign and display sub-division too.

“Plates and consumables mainly are the drivers of the business for Agfa Graphics, says Williams. “New drivers for business are the markets of wide-format printing and industrial printing - the latter mainly target markets for inks and technology integration.

Before going any further, let’s get clear what is meant here by ‘industrial printing’. “By that I mean inkjet printers of 2.5m wide and over,” clarifies Williams, who flags up a new range of machines in this size coming to market within the Jeti series.

“We see these heavier industrial machines going into the sign and graphics market, and also into commercial printers,” says Williams, adding: “The commercial guys are getting into wide-format with the mid-range machines - at Anapurna level. In 2016 the commercial print market accounted for about 33% of Anapurna sales in the UK and Ireland. And I think the ratio of sales to that market will increase. But, we’re also starting to see them shifting up to larger, more heavy-duty machines. They’re starting off with an Anapurna to test the market, become skilful and gain confidence, then they are replacing them with bigger machines.” Needless to say, large-format digital inkjet development to attract commercial printers is firmly on Agfa’s must do list.

So just exactly where is the Agfa Graphics R&D budget going? “The focus is on hardware and software integration, colour management and workflow, and very importantly, on inks and media,” outlines Williams

“Asanti, linked to Apogee, is now really gathering pace because everything is linking together,” he enthuses, explaining that Agfa is working closely with Tharstern too in the UK. But he accepts that “it’s more the commercial print guys who are buying into it, not so much the signage guys, many of which have done a lot of work on their own proprietary systems over the years.”

Commercial printers, but not yet large-format PSPs, are also beginning to get on board with Cloud storage offerings he says, “that take away the workflow and security headaches”.

Developments in the hybrid inkjet printer space are another way Agfa hopes to make more inroads into the commercial print market. “It’s the next focus because for entry level printers they see these machines as a real requirement.”

But don’t go thinking all the Agfa Graphics R&D pot is aimed at products for the commercial printer. Williams is clear that it’s not. Expect to benefit from a great deal of work being done in inkjet inks development for instance. Of course Agfa sells inks for its own printers, and also makes them for third parties, and while Williams is not giving away anything in terms of technical specifics, he says this is a key development focus. As is media development, as highlighted at the top of this piece. As for more textile machines to build on the Agfa Avinci DX3200 launched this spring, and more flatbeds perhaps  - watch this space - for now Williams is staying mum.