Have you gone as far as you’re going to go when it comes to forking out on new finishing kit - or will the latest technical developments, kit bundles and financial incentives make you think again?

According to our Widthwise 2019 research, investment in finishing kit is flat across the UK/Ireland large-format print sector (the report is downloadable for free at: https://www.imagereportsmag.co.uk/widthwise). So what are manufacturers/suppliers doing to convince you to fork out on new large-format finishing kit when so many of you feel you have spent the last couple of years focussing on this area and now have the right kit in place?

Well, Robert Marshall, vice president (market development) at AXYZ Automation Group, says that to make investment in new print finishing equipment an attractive option in the face of a currently slow-moving market conditioned by the impact of Brexit on capital equipment expenditure, it has been able to “buck the trend” by introducing an enticing machine trade-in initiative. Unlike previous initiatives that related only to the company’s own-brand AXYZ and Pacer machines, this latest programme extends to any comparable CNC machine from any other manufacturer/supplier regardless of type and country of origin. He says that with a trade-in allowance of up to £7,500, owners of a new AXYZ print finishing system also benefit from various machine enhancements and technical support to boot. 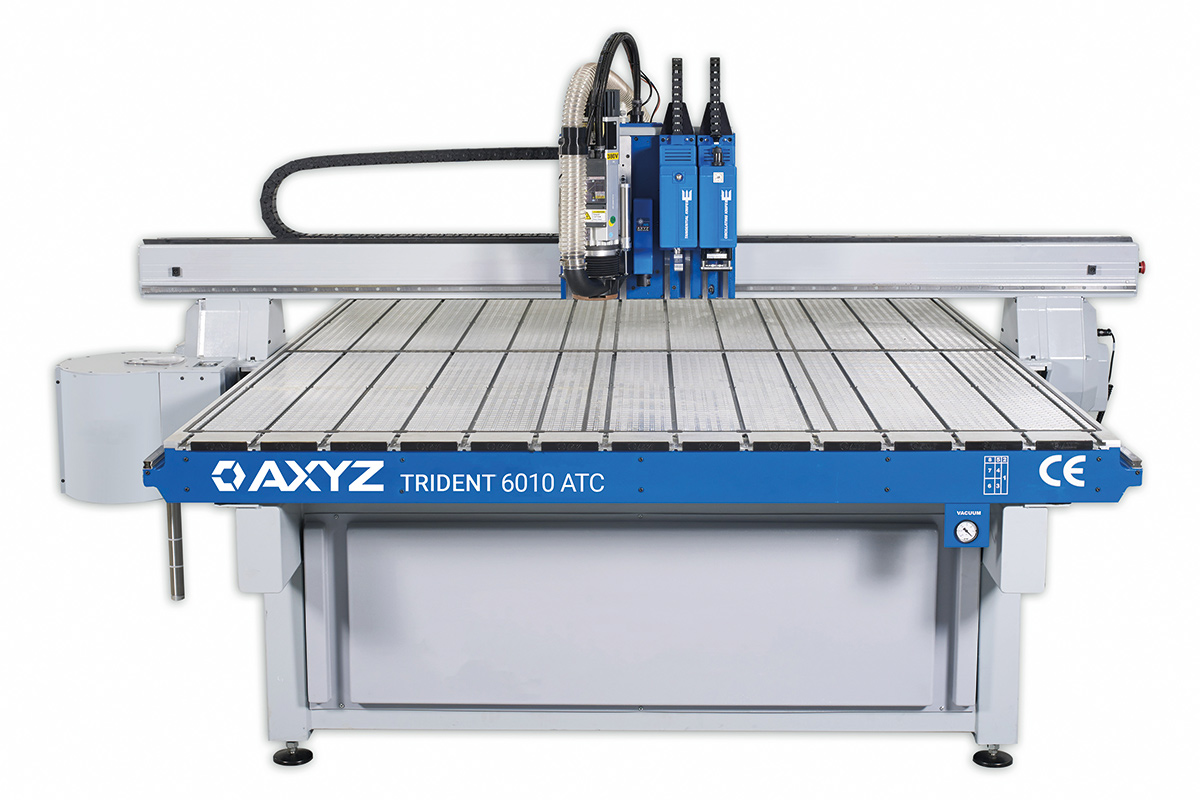 An important addition to the AXYZ portfolio has been the hybrid Trident print finishing system, recently redesigned to include new routing/cutting heads that are much easier to operate and service, a narrower carriage construction contributing to a 12% smaller footprint and improvements to the knife-cutting units to allow a wider range of materials to be processed. Furthermore, knife blade attachments can now be as long as 120mm to better accommodate the processing of harder, thicker and heavier materials.

Users of the AXYZ Trident also have access to a range of both standard and optional machine enhancements. These include an expanded (up to 33 stations) ATC (Automatic Tool Change) system, the latest AXYZ Auto Zone Management facility for optimum material hold-down efficiency and the new A2MC machine controller with integrated AVS (AXYZ Vision System). There is also the latest helical rack and pinion drive system that features a multiple gear teeth configuration to help spread the workload more evenly, thus increasing material throughput rates and reducing material wastage, leading ultimately to a longer than normal machine life.

At Atlantic Technical Services, distributor of the Neolt range amongst others, an attractively priced and spec’d finishing package is key to winning business in today’s market. Director Keith Pratt says: “We are particularly excited by the Neolt XY Matic Plus because it competes favourably against competition on both features and pricing.

“It is supplied with adjustable X and Y axis speeds and has a new automatic self-alignment adjustment feature, double sensor cross mark reader and LCD touchscreen, which also has a built in operator training video for the continued reference or support of the operator or any new operator after installation.”

The XY Matic - which starts at £18,750 - also features a built in silent compressor with pneumatic pinch rollers, and automatic waste collection with up to 10 vertical cutting devices. 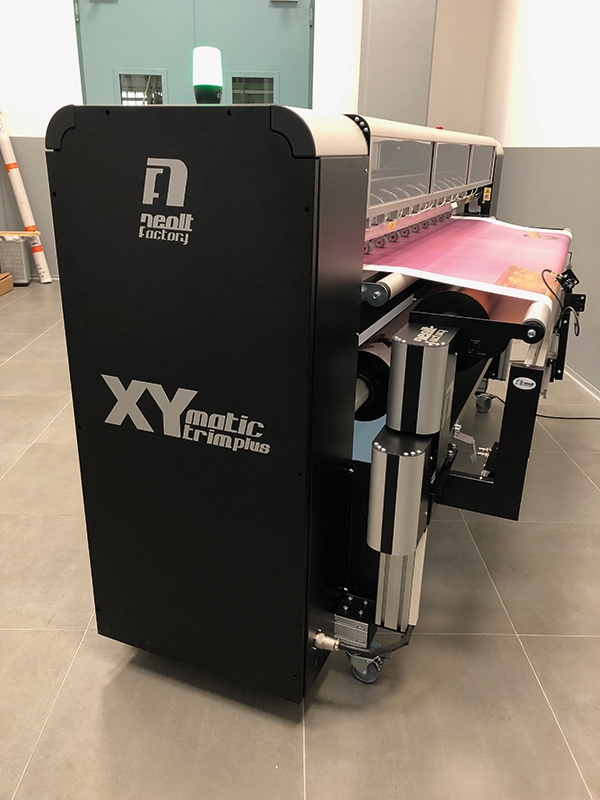 At Colourgen, which sells the French-made Kala range, the best-selling model is the Arkane 1650 because, according to Colourgen’s business development manager Phil Donoghue, “It’s such a great all-rounder and really suits the UK market”.

The Arkane - which costs from £8,950 - differs from the Kala Mistral range only in that the temperature of the top roller goes up to 140°C. The Arkane 1650 (65”) offers single-sided lamination, simultaneous lamination and adhesive mounting, encapsulation and board mounting up to 50mm thick, It will happily deal with output printed using water-based, LED UV, solvent and latex inks. It also has an auto media alignment system so the machine can be left unattended for long roll-to-roll jobs.

Another product in the Kala range is the relatively new flatbed AppliKator. It has a useable width of 1.70m and basic length of 2.07m, but the length can be extended in sections of 2.35m without limit -  just choose between 4,6, 8 or more metres when ordering and extend it over time as your business grows. It costs from £8,500.

Keeping with the value-for-money theme, note that Vivid, best known for the Easymount range of wide-format laminating systems, has added swing out arms to its Easymount EM-1600SH and Air Systems to make loading easier. Its next move is to produce the Easymount Sign with a pneumatic option while keeping it at a competitive price. Watch this space!

For Zund, automation continues to be a key focus. In 2018 we saw automated processing of large-format rigid substrates via Zund’s integrated production line with a D3 cutter and the Board Handling System BHS. The two independently operating beams can each carry up to three different tools and, depending on the specifics of the job, deliver up to twice the throughput.

The company also brought out the high-powered RM-L router spindle (delivering up to 3.6 kW of power) for processing hard, dense materials such as acrylics and wood. With the automatic router bit changer ARC, Zund provides a solution for completely automating the routing workflow and increasing productivity for acrylics, Dibond, Forex, and MDF applications. 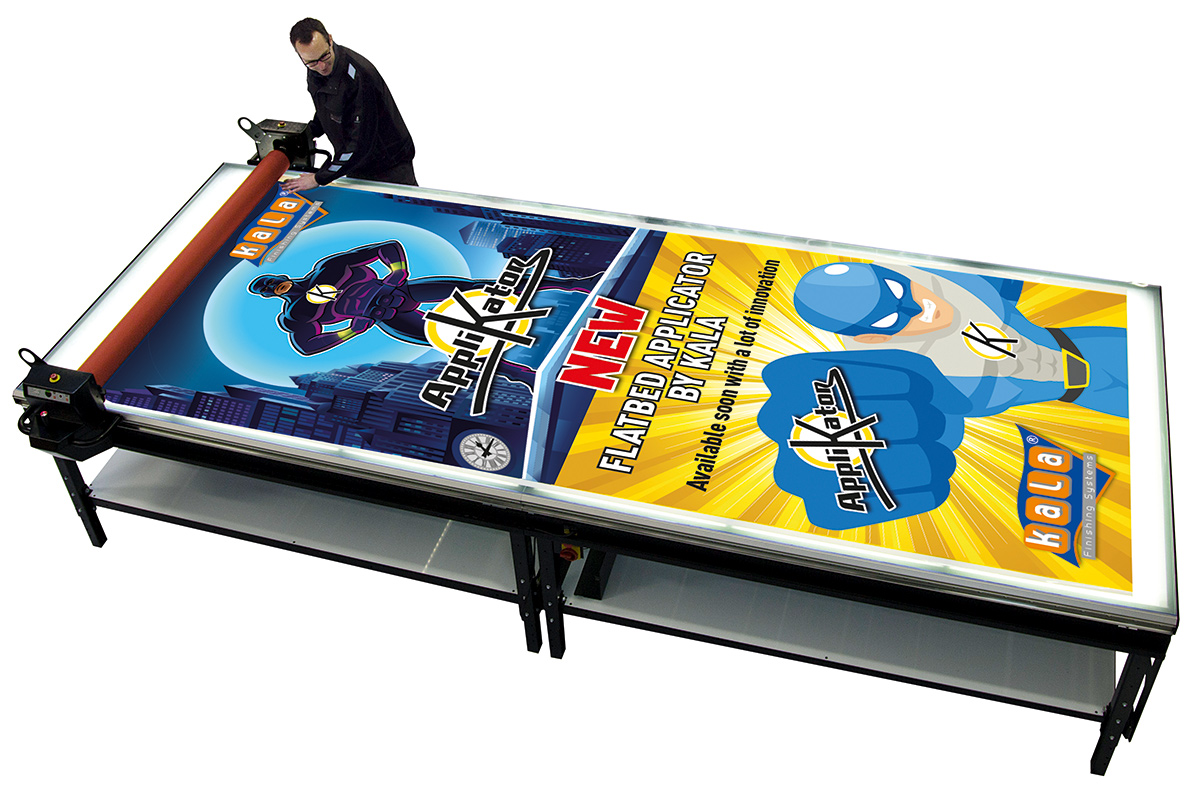 This spring much noise was made over the introduction of the Zund OCC (Over Cutter Camera), which can be added to any G3 cutting system. Powered by the ZCC (Zund Cut Center) it takes one image to register all marks visible in the working area. The OCC automatically captures all register marks after each advance, and in doing so, helps create maximum productivity.

When it comes to the trend for textile print, Zund is on the case there too, most latterly bringing out the G3 3XL-320 digital flatbed cutting system that can handle rolls of fabric up to 3.2m wide. 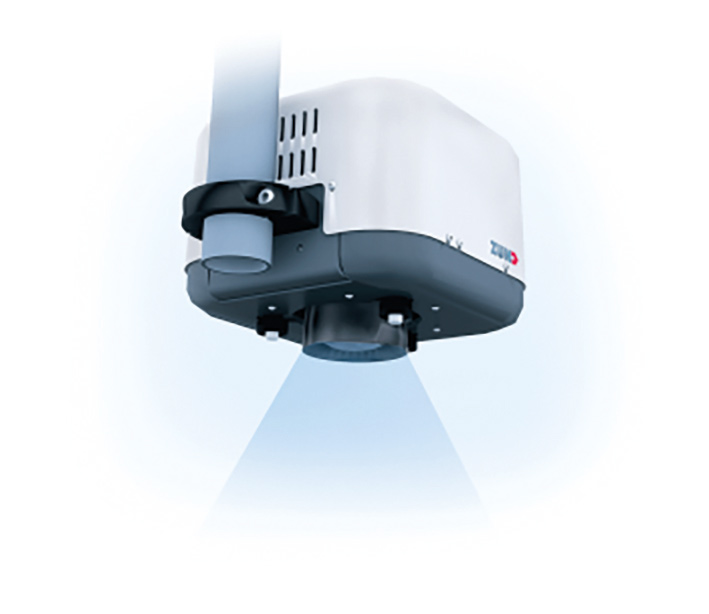 At Esko flexibility and efficiency are watchwords when it comes to finishing innovation. One of its newest offerings - the Kongsberg C Edge - is a completely upgradable cutting table. Similarly, the relatively newly-launched Dual Heavy Duty Unit makes it possible for corrugated converters to cut, crease and perforate jobs without the need to change tools - boosting finishing productivity by up to 50% according to the company.

Both of these innovations follow hot on the heels of the launch of the Esko Motorized Roll Feeder for soft signage applications at the Fespa Global earlier this year. The company says it developed the new hardware after recognising that signage and display manufacturers today require more flexibility, efficiency, throughput and accuracy in operations, “demonstrating the company’s commitment to innovation in hardware and software and working to unlock long term production flexibility and profitability.”

Jan De Roeck, marketing director, industry relations and strategy at Esko, takes this further: “With a specific focus on delivering digitalisation and automation, Esko solutions connect people, processes and data from both outside an organisation and through every step inside a business to drive operational efficiency, accuracy, quality and performance. This combination of significant automation, increased efficiency and reduction in costs - in terms of materials, energy and time - is now a major factor in delivering on the demands of customer requirements.” 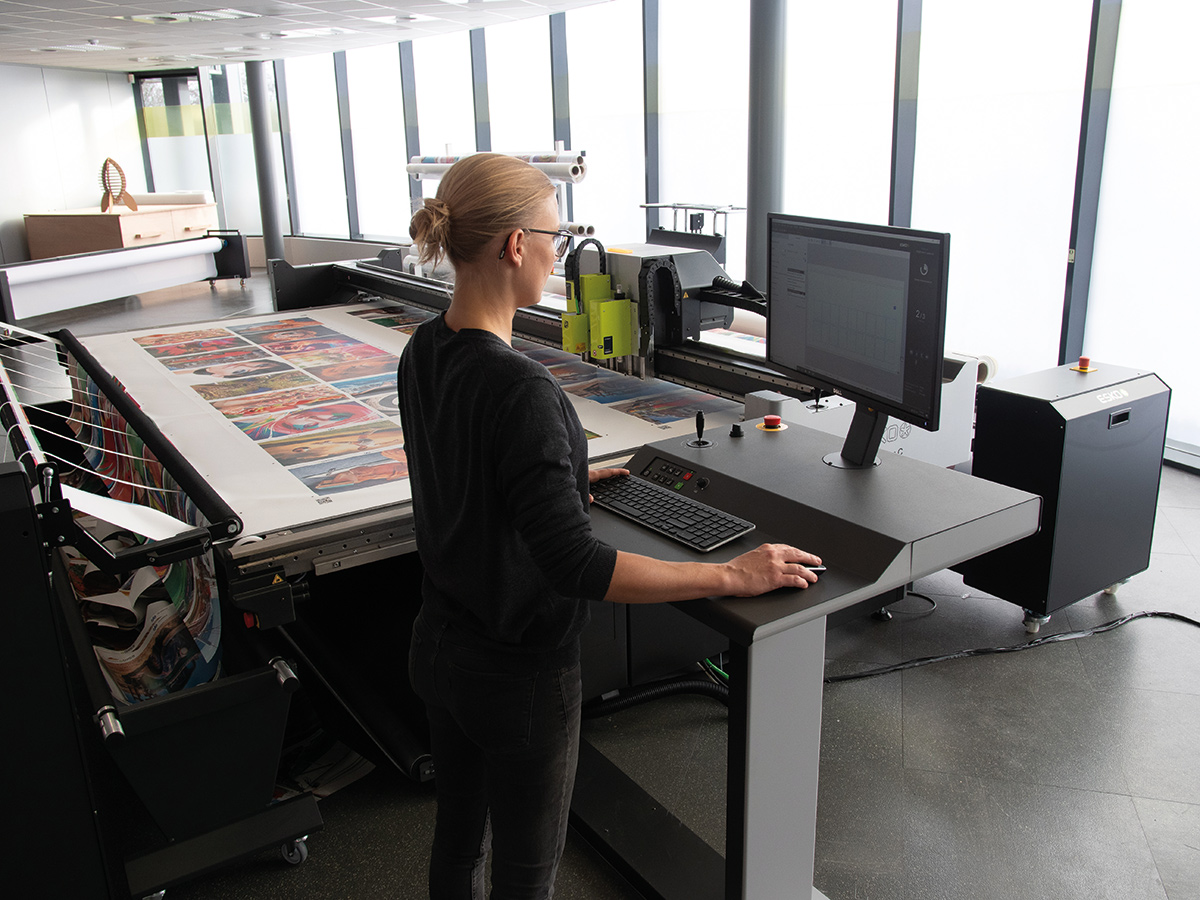 Large-format reseller printMax agrees. In its demo centre the Summa F1612 cutter has become a central feature, and in July it brought in a Mimaki JFX200 EX UV flatbed printer to demonstrate the high productivity levels generated when these two machines are used in conjunction. 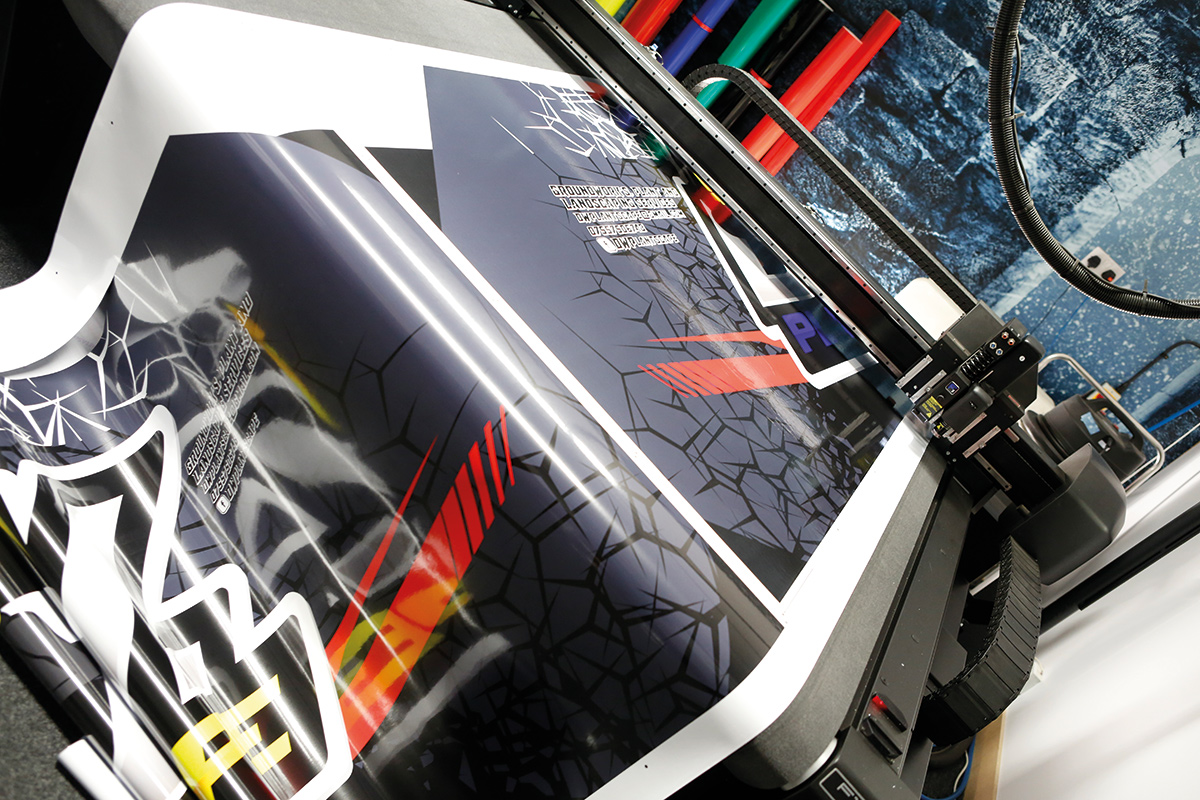 In order to combat the apparent issue of investment in finishing software and technology being relatively flat, printMax offers a variety of financing options to make the prospect more feasible and attractive for those looking to expand their businesses. In addition it offers ‘Workflow Bundles’ that combine production level printers and large-format finishing solutions at a reduced price when bought together.

Further still, printMax is beginning to promote multifunctional Rips - such as Onyx - whereby the operator can control both printers and cutters on the same software, creating a simple, seamless process to streamline production and maximise workflow efficiencies.

When it comes to finishing, the story is far from finished.