Fespa Global and SDUK may not have taken place this spring – but fear not, Simon Creasy brings you up to speed on KEY technical developments that would have been showcased.

Usually spring-time would be a busy period for manufacturers of large-format hardware and software. Companies would be launching or preparing to launch new products that they would unveil in a fanfare of publicity at one of the numerous European print industry trade shows scheduled throughout the year. This year it’s different.

Thanks to the Covid-19 crisis Sign UK, Fespa and Drupa have already sadly fallen by the wayside, with the events postponed until later this year or pushed back to next year. But while these gatherings may no longer be going ahead as planned there is still an impressive array of kit that is ready to be rolled out to the market. And with manufacturers not able to showcase their wares to customers in the traditional time honoured fashion, many are getting creative.

Take the example of Agfa. According to Bobby Grauf, inkjet sales manager at Agfa UK and Ireland, the company had an impressive line up of products it intended to showcase at Fespa. 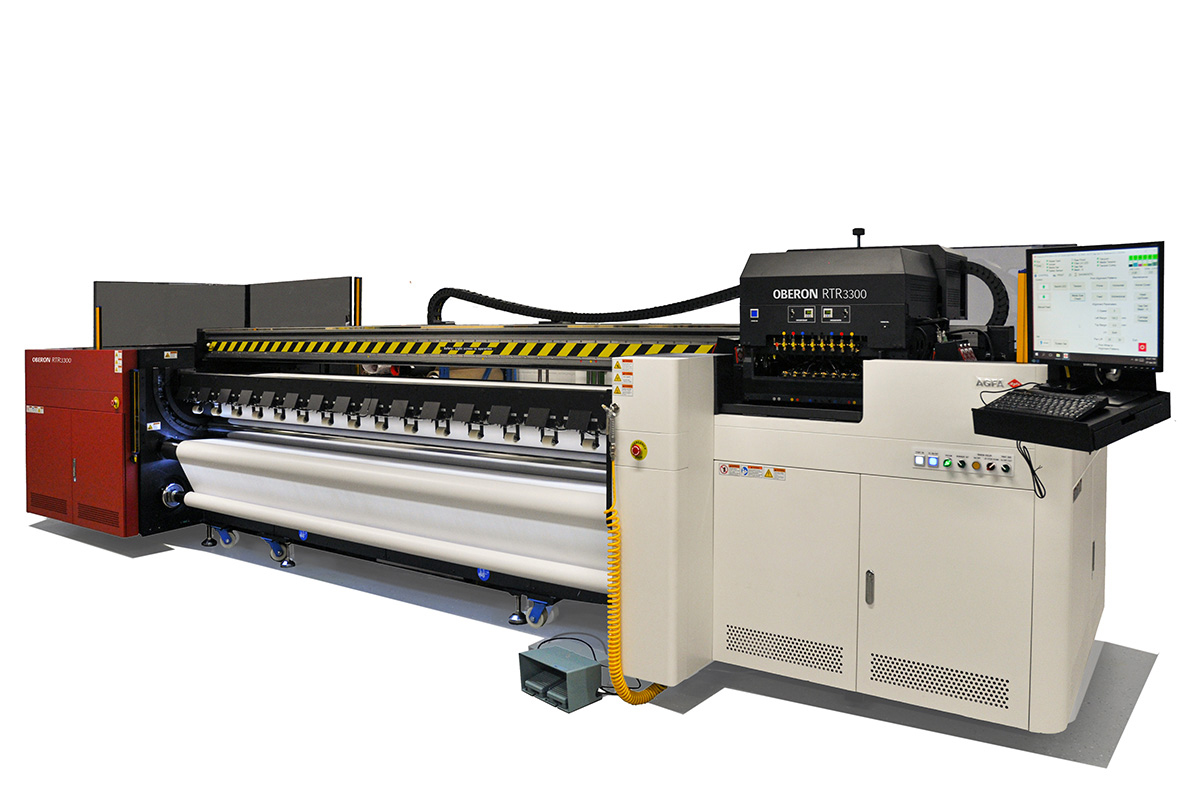 This included the new Oberon RTR3300 - a dedicated 3.3m wide roll-to-roll UV LED curing machine - and a four-colour version of the Jeti Tauro H3300 LED. It also planned to unveil an automatic board feeder (ABF) for the Jeti Tauro H3300 to offer three quarters automation and an integrated light RTR option for the same machine. In addition, Agfa was going to use the Madrid-based show to launch PrintTune - a cloud-based print standardisation tool that aims to standardise colour output across multiple wide-format printers and presses across multiple sites. 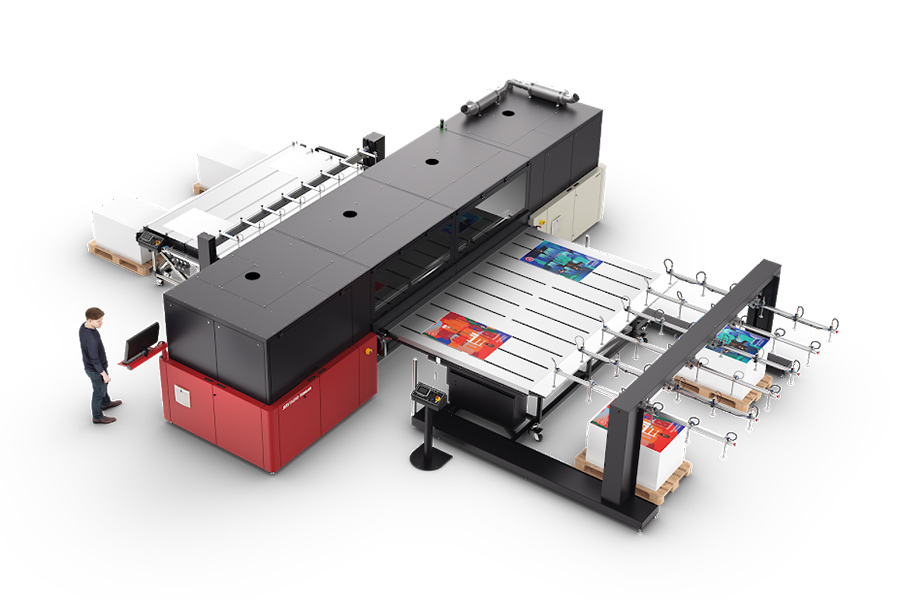 Despite Fespa now being pushed back to October, Agfa launched all of the products as originally planned in March and is about to start ‘virtually’ marketing the devices to customers.

“With severely restricted national and international travel, we are launching a series of virtual live demos, training and seminars to show these to existing and new customers,” says Grauf. “The goal is to start in the weeks following Easter.”

He explains that the new launches were developed to address customer demand for high quality at faster speeds, easy to use automation, maximum flexibility and quality control.

As for what the large-format print market will look for once the Covid-19 crisis starts to ease, he believes that “continuity, stability and trust will play a major roll when printing companies decide about the next investment. Buyers will be/should be looking for more than just a printer, but a partner who offers all-in support, uninterrupted supplies and financial services to futureproof their investment - a partner that continuously improves not only with new products, but that can offer enhancements on existing platforms too. We believe Agfa is exactly that partner today and in future,” says Grauf.

Increased automation is an area Fujifilm is also focusing on. According to Nils Gottfried, product marketing manager, wide-format inkjet systems at Fujifilm Graphic Systems Europe, it was going to be the major focus of the company’s presence at Drupa this year.

“Customers are constantly looking for ways to reduce the need for operator intervention and to improve lead times. Robotics are a large part of this and the Onset range from Inca Digital and Fujifilm has some of the most advanced and intelligent robotics systems on the market,” says Gottfried.

He stresses that one of the key challenges in integrating robotics into wide-format print is the short-run nature of the work. Frequent job changeovers create bottlenecks and that’s where he claims the Onset X HS range, which launched last summer, truly comes into its own. 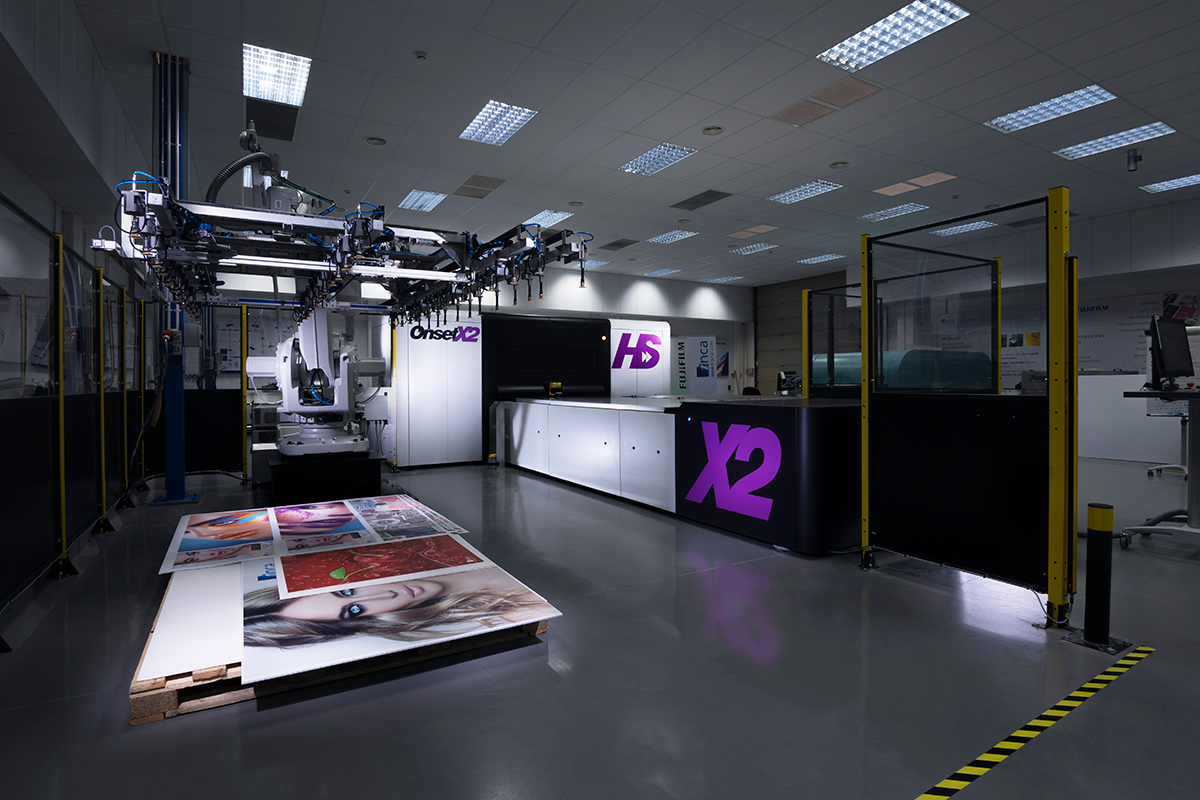 “The new Onset X HS range is a prime example of a fully digitally integrated robotics and printer system,” says Gottfried. “The programming of the robots is straightforward for operators, and once connected to the printer, a fully automated printing process is created - the printer and the robotics become one and the same machine. The robot can learn the performance of the printer, understand how long print jobs take and when to load or unload the next media. In fact, the job set up time on the Onset X HS is only 30 seconds - a big reduction from the industry standard 15 minutes. This means far less operator intervention and a substantial boost in uptime and productivity.”

He adds that when you combine this technology with remote and preventative diagnostics such as the company’s IncaConnect it frees up operator time, reduces human error and increases “speed and reliability across the board”.

Some of the same trends dictating the future shape of new product development at Fujifilm are also influencing the direction of travel at Canon. Duncan Smith, country director, production printing products at Canon UK, says one of the big things the company’s customers are demanding from equipment providers at the moment is fast turnaround times.

“Up to 60% of print orders are now delivered within 24-hours,” says Smith. “As a result, businesses are increasingly looking for products that are easy-to-use and can print quickly and efficiently. We’re helping businesses to achieve this through the extremely successful Arizona Flatbed printers that have been the PSP’s popular choice for over 10 years and the recently introduced Colorado series with Canon UVgel technology, which delivers high-quality robust output that can be finished and shipped immediately. We’ve also launched products that are developed for ease of use, and improved productivity, which means that customers can get their prints to market much faster.”

Sustainability is also front of mind for many PSPs and whereas previously sustainable product choices may have been viewed as a ‘nice to have’ he thinks this is now a business critical issue. That’s why Canon is offering customers the option of buying remanufactured Arizona printers.

“Not only do these products help businesses to opt for environmentally friendly devices, they also provide great value for smaller businesses with tighter budgets,” says Smith. “Throughout the next five years, we anticipate that the demand for print will continue to grow, as new product designs that help both customers and the environment, rise in popularity.”

Another area where Canon sees plenty of scope for future growth over the coming years is interior design printing.

“Traditionally, analogue printing methods would have incurred expensive set up charges and printers would have needed to produce in bulk to break-even,” says Smith. “However, thanks to a rise in new technologies, bespoke prints can now be easily produced in smaller quantities at a much lower cost. For example, both Canon’s Arizona and Colorado series offer robust, odourless output, that can be used for small or large quality printing in a range of environments. Through these developments, we have seen the market for both domestic and corporate prints grow dramatically, and we predict this industry will continue to expand in the future.”

While some companies decided to push ahead with new product launches despite the widespread cancellation of print trade shows, others are adopting a watching brief for the time being at least.

According to Phil McMullin, UK sales manager pro-graphics at Epson, the company was poised to launch some “exciting” new products at Fespa, but when the show was postponed it was decided these products should be unveiled at Drupa instead. With that show also now postponed the company is currently working towards launching the new products at the end of May, although the situation could change in the interim.

“In a couple of months we hope to start getting back to normal and continue the raft of new releases that were scheduled for 2020,” says McMullin. “It is going to be an exciting year for us in the large-format commercial industrial print section of Epson and we don’t want this to derail us anymore than absolutely necessary.”

Although McMullin says he is unable to divulge specific details about the new products he hints as to what we can expect to see from the company.

“If you look at [Epson’s NPD] trends over last few years it has been about plugging the holes in our portfolio,” he explains. “So there is now a full range of dye-sublimation printers, there is now a full range of CAD printers for architects and designers and we have extended our range of photo printers, so that is all about refreshing proven ranges and filling in any gaps. The announcements that I hope will see the light of day at the end of May will be new and exciting and take us into different arenas. We do already have the full bandwidth of ink types out there for different applications - you just don’t see them across all platforms. That’s about as much detail as I can give you at the moment. What I can say is it is going to be exciting times [for the business] and it will definitely be worth tuning into.” 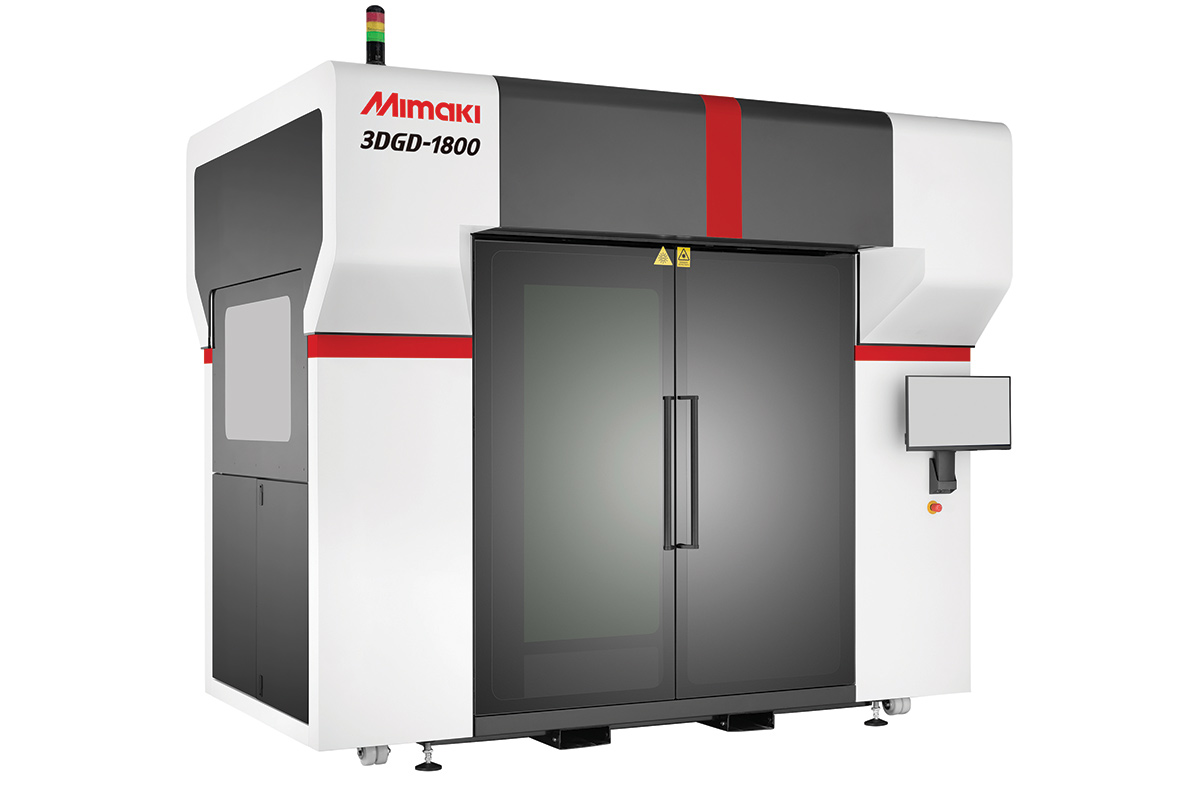 Mimaki is also expanding its scope, with a large-scale 3D printer aimed at those in the sign and display manufacturing markets. The company says its 3DGD-1800 3D printer facilitates large-scale production up to three times faster than with conventional Fused Filament Fabrication (FFF) type 3D printers. It is capable of producing objects up to 1.8m tall in seven hours. Its assembly-based design allows for the creation of larger designs too, and its dual-head configuration enables the simultaneous output of two structures. The 3DGD-1800 also allows the production of support-free hollowed structures, further streamlining production whilst allowing for increased portability and the possible addition of interior illuminations.

“Part of what makes our approach unique here at Mimaki is our dedication to being a total solutions provider, and as such we have ensured that even beyond the 3D printing stage, our Mimaki inkjet printers can then be utilised to add colour and decor, making created objects even more impressive and immensely versatile,” says Bert Benckhuysen, senior product manager at Mimaki Europe. “We intend to lead the sign graphics industry in both two- and three-dimensional signage - and the introduction of the new Mimaki 3DGD-1800 is a fantastic step forward in achieving this goal.”

With Mimaki’s new 3D printing system designs can be visualised as a finished product just based on the 3D data, and then produced in various sizes from a single data set. The 3DGD-1800 employs gel dispensing printing technology, extruding gel-type UV curable resin lineally and utilising LED UV light to instantly cure the resin, enabling lamination speeds of up to 350mm in height per hour.

The situation we currently find ourselves in is unprecedented not just for the printing industry, but for every industry sector. While we face an uncertain period in the months ahead the one certainty based on feedback from some of the leading print equipment manufacturers is they are busy beavering away and working up plans to deliver a pipeline of products that meet customer needs in the short, medium and longer term.