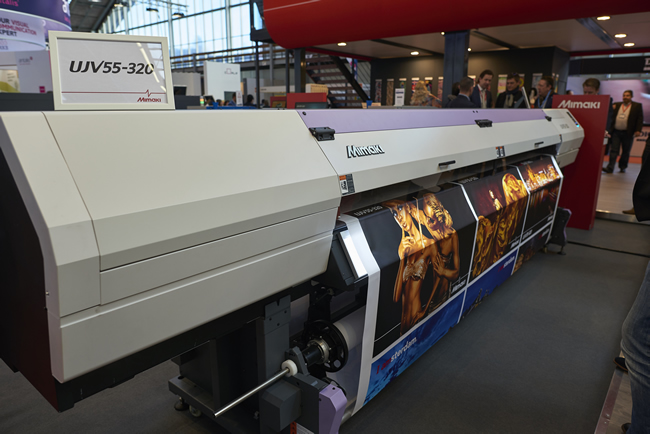 At first glance there appeared to be a distinct lack of new large-format inkjet hardware at this year’s Fespa Digital show… but there were a few surprises tucked away. Nessan Cleary reports.

This year’s Fespa event in Amsterdam was the digital-only version rather than the full-fat flavour - which means there was no screenprinting. Rather the event was made up of a collection of different exhibitions that together showcased textile and garment printing alongside printed interior decor and home furnishings as well as actual digital printers. The overall impression was a focus on applications rather than hardware, which most visitors seemed happy with. But it meant that on a first show walkthrough there was a noticeable lack of inkjet hardware, particularly the big flatbeds that we’d normally expect to see at a Fespa show, with many vendors presumably holding back for the European print trade show calendar’s big daddy, Drupa, which takes place in Dusseldorf in a few weeks.

The overall impression from Fespa Digital 2016 was of a mature market sector with minor technological iterations rather than anything groundbreaking. But that’s not to say there weren’t some gems.

The most significant announcement came from HP, which launched the Scitex 9000 flatbed - although the printer itself was absent from proceedings. Nonetheless, it’s an interesting concept. Essentially, HP has stripped its high volume Scitex 11000 down to its basics to create an entry-level production flatbed machine that should cost around 650,000 Euro. Thus it has the same HDR printheads, and could produce up to 90 beds per hour.

Nina Starr, product marketing manager for HP, says that 60 beds per hour, or around 300m2/hr is a more realistic figure because the media has to be manually loaded and unloaded. However, it can be field upgraded to a Scitex 11000 with fully automated loading, making for a very flexible offering. There’s a new HDR 245 inkset that is said to be relatively flexible while still exhibiting good rub resistance and adhesion. The colours are CMYK plus light cyan and light magenta. It should be available from June.

Durst somehow managed to squeeze several very large printers onto its stand, including the Rho 1312 AF configured with automated loading for faster throughput. There was also a revised version of the WT250, which was first shown at last year’s Fespa in Cologne. Then it was more of a technology demonstration but now it’s almost ready and is slated to be available from May this year.

Although the WT stands for Water Technology, it’s actually based around a hybrid ink that uses UV curable elements suspended in water. The advantage is that it produces a very vibrant glossy image, quite distinct from that you would expect from a UV printer, with a thin film weight. It’s a big machine, needing both IR drying and UV curing, though Durst has tweaked the drying system to cut down the energy consumption.

It can cover some interesting applications, though it’s not suitable for outdoor signage. Rather it’s mainly designed to print to paper and cardboard, including corrugated with short-run packaging being one of the target markets. However, Leopoldo Bravo Camposeco, sales manager for Durst in Mexico, says that the company is also testing polyester and polystyrene as well as flexible films. It was shown at Fespa in a flatbed cut sheet configuration but can also be fitted out for roll-to-roll production. Print speeds range from 120m2/hr for high quality up to 400m2/hr for cardboard. The cost is likely to be around 500,000 Euro.

Durst also showed a brand new printer at the show, the 5m wide Rhotex 500. This is aimed at both the soft signage and the home furnishings and décor markets thanks to its ability to print wide graphics without seams. It can produce up to 310m2/hr in its fastest mode, which drops to 100m2/hr for the high quality mode. The standard inkset is CMYK but there are options to add light cyan, light magenta, light black, orange and violet. It too should be available from the end of May.

Durst also brought an Alpha 190, a 1.9m wide industrial textile printer that’s primarily designed for clothing and furnishing applications. There’s a choice of pigment, reactive, disperse and acid inks, depending on the substrates it’s intended for. It’s a smaller version of the existing 3.3m Alpha 330.

EFI showed off a number of printers, including the Vutek FabriVu, which is based on the Reggiani Next platform that we covered in last month’s issue. Essentially, EFI has repurposed a garment printer for soft signage use. It uses aqueous disperse dye inks and can print direct to textile or to transfer paper. There’s a choice of 1.8 and 3.4m wide models, which can produce up to 464m2/hr at 600 dpi.

Several other new printers were also exhibited by EFI, including the Vutek LX3 Pro. It’s a 3.2m wide hybrid printer using LED UV curing that’s capable of producing up to 318m2/hr and can handle heat sensitive material. Scott Schinlever, senior vice president and general manager of EFI’s wide-format printing division, described it as the mid-range of the EFI offering, adding: “It’s really been the sweet spot for us.” There’s a choice of four or eight colours.

There was also a new production machine, the HS125, essentially a faster version of the HS100. It’s a high volume 3.2m hybrid that can produce 125 boards per hour. It uses pin and cure system that allows for some fine tuning of the gloss level.

EFI also announced two variations on its entry-level H1625 printer based on new inksets. Thus there’s an SD version that uses the SuperDraw inks for thermoforming. Schinlever explains that many people prefer to set aside a cheaper machine for this application rather than the more expensive Vutek GS machine that was originally offered with these inks.

There’s also a new RS version that uses an inkset developed with 3M for printing road signage. Schinlever adds: “There’s a strong short run market because there’s a lot of regulation in this area.”

Besides these EFI launched a Matan Quantum LXr, a LED curing printer that Matan had been developing prior to its acquisition. EFI is pitching it as an alternative to the bigger HP latex printers. It has a fairly small 7 picolitre drop size, with up to 1200dpi resolution and an option for white ink alongside its standard CMYK inkset.

Fujifilm, which previously rebadged the Matan printers for its UviStar range, showed off a new model, the UviStar Hybrid 320. However, although Fujifilm still has access to the Matan technology, this is based around a printer from Novus. It’s a 3.2m wide hybrid, with a large top platen, that uses 72 Fujifilm Dimatix Q class printheads with Fujifilm’s own UV inks and nine colours: CMYK plus light cyan, light magenta, light black, orange and white. It’s designed for heavy-duty production and can print up to 201m2/hr. It allows for boards to be fed continuously so that it keeps printing more or less non-stop. It will be officially launched at Drupa.

Mimaki also launched a 3.2m superwide printer, the UJV55, which was shoehorned into the middle of its stand. This is a 3.2m wide roll-to-roll printer with LED UV curing. It can produce up to 110m2/hr and can print two rolls side-by-side. It has a seven colour inkset including white and light cyan / magenta that can be configured in a four-colour mode or six-colour set plus the white. This white ink can be used with transparent and coloured media and for three-layer - colour-white-colour - printing for applications such as window graphics and backlit day and night signs. It also has a LED lightbox built in so that operators can check the backlit effect on the printer.

Inktec has also been looking at LED curing, showing off a new Jetrion LX5 flatbed. Essentially, Inktec has developed a LED-compatible inkset for its existing printer. It’s still a four-colour printer but with the option to add two white channels. So it uses the same Konica Minolta printhead with 1440 x 720dpi. Print speed ranges from 11.15m2/hr for Fine Art mode up to 39.99m2/hr for Production or 59.69m2/hr for Draft mode.

Roland introduced a new print and cut machine, the TrueVis VG, available in both 1.3m and 1.6m widths. These use new Roland FlexFire printheads together with a new TrueVis eco-solvent ink. There are eight channels and a choice between loading two sets of CMYK or a seven-colour inkset - CMYK plus light cyan, light magenta and light black - with an option to also use white. Print speeds range from 34.8m2/hr in banner mode to 10.6m2/hr in high quality mode, with a dual CMYK set up.

Canon showed off its latest iteration of the Arizona range, the 1200 series. These have gained some of the features first seen on the much larger 6100 series, including pneumatic registration pins, and an option for automatic head cleaning.

Normally, we look at the inkjet printers launched at the annual Fespa shows to draw conclusions about the trends in the market - at least as the vendors see them. But it’s difficult to do that this time around. In part this was down to a sense that some vendors had held back for Drupa, which if true would indicate that many vendors are looking towards commercial printing companies for future sales. But another factor is that many wide-format manufacturers are concentrating their efforts on developing textile printers, many of which are aimed more at the garment and décor markets. So, ultimately this Fespa has thrown up more questions than answers.