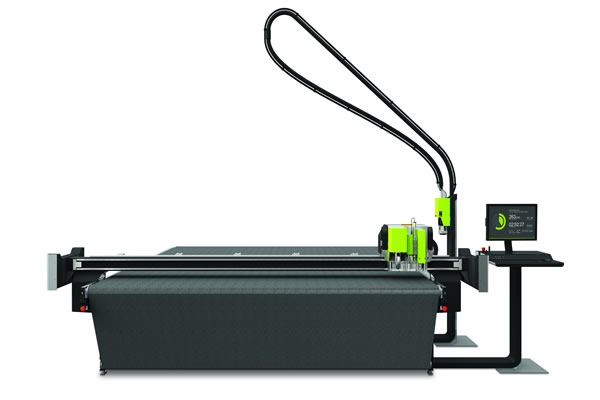 Are you still arguing over whether to buy a router or cutting table? Nessan Cleary helps solve your dilemma.

We’ve reported in recent years a general trend towards ever larger flatbed printers, with machines like the Agfa Mira and Screen W3200 offering the sort of productivity that even smaller sign shops now need. But what does this mean for the finishing side of the business? Just about everyone accepts that you will need some kind of a cutting tool to keep up with the print production, but should this be a router or a cutting table, and can one machine handle all requirements or should you look for multiple machines with different capabilities? 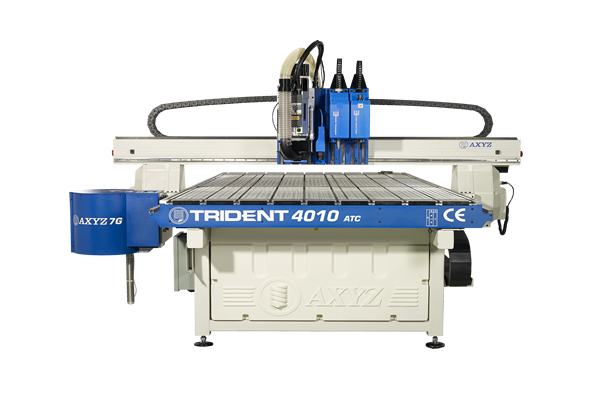 Cutting tables are normally the first choice, mainly because they all offer a camera system so that it’s relatively quick to set up the cutting pattern but they are limited to lighter materials. Traditionally, routers have been used with tougher materials, such as wood and aluminium. But most vendors also offer knives and camera systems so that they could be used with lightweight materials such as foamcore and cardboard.

AXYZ has answered this conundrum by developing a hybrid router designed as an alternative to a cutting table and a standard router. The Trident can handle most materials common to display graphics from MDF and aluminium composite through to foam and cardboard. Robert Marshall, vice president of market development for AXYZ International, accepts that you could configure a standard router with a knife but says: “We felt that we could do a better job if we made something specifically for this market. There are quite a few subtle differences between the Trident and a standard router.”

The standard tools include both a tangential cutting blade and an oscillating tangential knife. Marshall says: “The knives are different to those we would fit to a standard router. They are smaller with more powerful motors so that we can align them faster. They have automatic alignment features to calculate the direction of the blade more accurately. There’s a quick release mechanism on the knives so that it’s very easy to switch them over.”

It has a camera registration system, with the software for this built in to the controller rather than as an optional extra. In addition, the tool head is much smaller than a standard router, which allows the machine itself to be smaller.

The Trident also comes with a fairly heavy-duty routing spindle. Marshall says that most of the routers fitted to cutting tables tend to be underpowered and struggle to cut materials like aluminium or acrylic at speed. In contrast the Trident has a 10Hp routing spindle and can be fitted with a head that rotates at 40,000rpm. Marshall says that you need this sort of speed to make a really clean cut with materials like clear acrylic, noting: “You can get a very polished edge finish because it’s spinning so fast.” 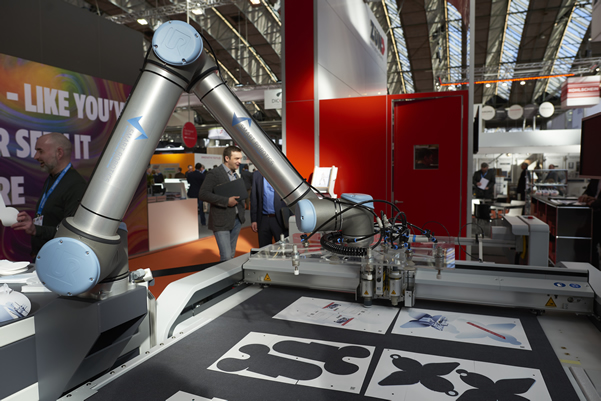 There are a number of trends in cutting tables, with PSPs demanding both cheaper and more specialised offerings. Esko has experimented in this with its entry level V series sold in two configurations for packaging and sign making.

Esko is launching two new series of cutting tables at Drupa. The X-series applies some of the principles learned from the V-series approach to Esko’s mid-range tables. These devices will be sold as kits designed to have everything that a particular application, such as sign making, would require. These tables have a modular design so that customers can start with a base model and add further features as and when they need them, such as a conveyor belt for faster loading and a more powerful 3Kw routing tool.

There are six different sizes, starting with the X20, which has a bed of 1680 x 1270mm, and going up to the C48, which takes media up to 2.2 x 6.5m, though Russell Weller, business development manager for Esko EMEA, says that the C24 is likely to be the most popular, with a bed size of 3.2 x 1.6m, which matches that of most flatbed printers.

Workflow is becoming increasingly important as everyone looks to squeeze the maximum productivity out of the available hardware. Esko has also addressed the software side with a new version of its i-cut Production Console, launching at Drupa. Thus v2 features a redesigned user interface. Weller explains: “We have corrected things like moving the job lists so that an operator can queue the jobs and can control the actual production of the job all from within one window in the software.” He says that the job list has gained additional functions, adding: “We can queue jobs and filter them by things like delivery date and materials used and direct the queues to how that job will be produced.”

There’s a new Shared Resources function, which is essentially a database about materials handling that tells an operator which tool to use and how to set it up. This in turn makes the tables easier to use but also means it’s easier to achieve consistent and repeatable results.

Esko has also added an estimating feature that can analyse the cut patterns and give an accurate time as to how long it will take to produce each job. This in turn means that service providers can more accurately estimate job delivery times. The system can be linked through to an MIS via XML.

The iPC 2.0 software is initially being introduced along with the new Kongsberg tables but Esko is planning to make it available for some of its older platforms. Weller says: “We want to make sure that we can protect our customers investment.”

Esko has also strengthened the ties between its wide-format Kongsberg tables and its prepress software with a new module called Device Manager that’s part of the Automation Engine workflow but can also be used as a standalone program. Its job is to manage Esko’s hardware, mainly the Kongsberg tables and the Cyrel flexo imagers, to tie these devices more firmly to Esko’s CAD and packaging software.

Zund also has been looking at ways to improve productivity, demonstrating a robotic system at the last Fespa show. This was set up with an S3 M800 cutting table, which was fitted with a conveyor belt. The robotic arm was used to take cut graphics from the conveyor bed. This was combined with a sheet feeder for loading, giving a fully automated solution, costing around 135,000 Euro including the cutting table. It’s a fairly standard robot and Stefan Lang, head of sales and marketing for Zund, says that it should be possible to integrate any existing robotic system. It comes with a universal head with a set of grippers that can be positioned according to the demands of the job. Lang adds: “We can also equip it with different heads.”

We’ve long argued that it’s cheaper to improve workflow than to buy more hardware and this is especially true with routers and cutting tables, which tend to last for a long time. So improvements to the overall software to tie the cutting table into the workflow are generally to be welcomed. But equally, creative options such as the robotic system can help improve throughput to older devices. This will become more important as the printers become bigger and faster, and the bottleneck shifts downstream to finishing.