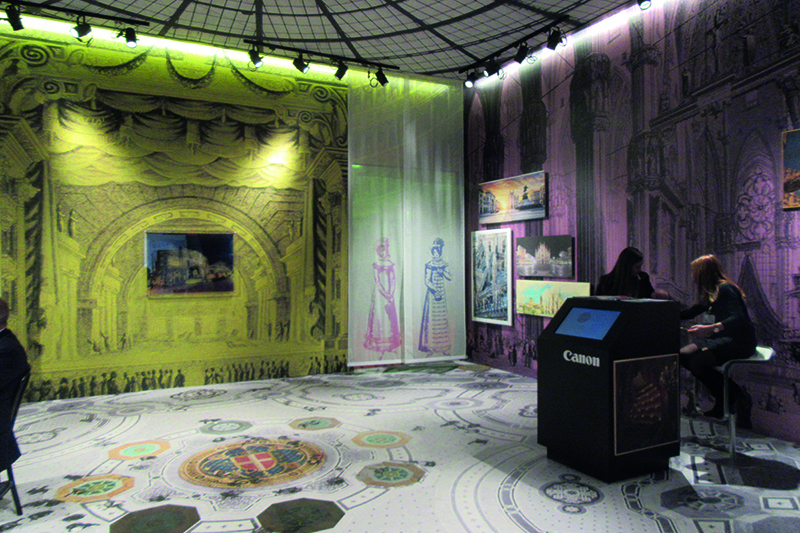 What technical developments are going to create the biggest impact in large-format in 2017? Richard Stuart-Turner investigates.

2016, it’s fair to say, was an eventful year. But looking beyond the Brexit decision, Donald Trump’s US election victory and the passing of many much-loved celebrities, it was just as lively a year for print. Being a Drupa year this was perhaps expected, with many manufacturers showing something new or innovative at the Dusseldorf event, as is often the case. And this time around digital inkjet proved a star attraction.

Though the hype surrounding Landa and its long-delayed Nanographic presses - some of which were running live on the Israeli firm’s stand - was difficult to ignore, perhaps the biggest general trend seen at the show was the continued growth in single-pass technology that looks set to revolutionise areas such as corrugated packaging.

Some of the innovations shown at Drupa, plus some of the kit already debuted at Fespa Digital last March, confirmed what most of us already know - that the large-format sector has more opportunity than most other areas of the print industry right now.

This is good news for those looking to diversify their businesses in 2017 and beyond but where’s the best place to start? In terms of the developments that are likely to make the biggest impact this year, many of the manufacturers and industry analysts we spoke to believe that 2017 will be about the growth of technologies that we learnt about last year or earlier, but that are only really now starting to take off.

In terms of specific new kit or technology we can expect to see coming through later this year, most manufacturers are - perhaps unsurprisingly - keeping tight-lipped for now. But with Fespa 2017 taking place in Hamburg in May, it’s a given that we will learn a lot more over the next few months about where the market is heading.

Some companies, however, have already revealed details of what we can expect from them in the next few months. One of the biggest developments anticipated in the roll-to-roll market is Canon’s self-proclaimed “revolutionary and game-changing” UVgel printing technology.

UVgel is based on a UV curable ink that instantly gels on contact with a media, but also incorporates new hardware developments, such as piezoelectric printhead technology employing patented acoustic sampling technology that monitors nozzle performance on-the-fly during printing.

Other than revealing it will be launched this spring, Canon is not yet giving much away about the first 64in printer that will use the UVgel technology. But Canon UK business group manager for display graphics Dominic Fahy says he expects the technology to have a major impact.

“UVgel is a revolution rather than an evolution and it will redefine the market. It presents an opportunity for us to grow our business quite significantly in a segment of the market where we’ve got an awful lot to offer and this new technology will give us that route in.

“It uses a new, unique LED curing system and it operates independently from a print system, which means you can really manage the print and the curing very rapidly because they’re not together. Being separate, you also don’t have to make compromises on one or the other.”

He adds: “Because it’s an LED-based system, it cures without adding any heat to the media whatsoever so means you can print on very thin medias and heat sensitive, flexible medias that have the potential to distort under heat.”

Fahy says suitable applications for the technology could include large graphics requiring multiple drops - for example when an image needs to be lined up - or wallpaper.

In terms of cost, Fahy says the UVgel-equipped printers will be positioned at a level that will make them attractive to users of current roll-fed technology to upgrade to. He estimates PSPs will benefit from a printing cost reduction of up to 40% compared to latex and eco-solvent alternatives, due to UVgel’s low ink consumption rate. Let’s see.

Epson, though, is pushing forward with eco-solvent inks in 2017. Epson UK sales manager for ProGraphics Phil McMullin says the firm’s 2016-launched SureColor SC-S40600, SC-S60600 and SC-S80600 printers, which all use the UltraChrome GS3 eco-solvent inks, have made eco-solvent a more relevant inkset for producing high quality print.

“It’s almost got to the stage where eco-solvent can produce the same quality as aqueous and you certainly couldn’t say that before those SureColor SC-S series units came out - there was always a visible gap in quality.”

Epson’s first product launch of the year, announced earlier this month, is the SureColor SC-P5000. The A2+ machine, which replaces the Epson Stylus Pro 4900, completes the SC-P series range.

“In the print market it’s the proofing side of things where this machine will get the most focus but it’s also a mainstay of the photographic industry and suitable for anybody who needs high quality images up to A2+,” says McMullin. “It’s basically the bottom end of the entry-level for what you might call proper wide-format.”

As mentioned above, one of the biggest stories of last year was the buzz around single-pass inkjet, with significant product launches in this space coming from the likes of EFI and Durst. This technology proved to be a major talking point at IMI Europe’s Digital Printing Conference, which took place in Amsterdam at the end of November.

“The step up in capability of the new very fast single-pass sheetfed machines that are coming through compared to the previous generation machines is really quite spectacular,” he says.

“I think in the corrugated area it probably means that we’ll start to see an impact from digital into one of the packaging applications that hasn’t really been hugely impacted by digital before - certainly not from inkjet - so that’s potentially quite a significant change.”

He adds: “There’s been a demand for machines like these to print different types of packaging for some time but the quality probably hasn’t been there in a lot of cases. It’s really nice from some of these machines coming through now though and speeds are at least on par with conventional machines so that makes it a lot easier for people to adopt.”

The latest Smithers Pira data on the corrugated sector backs up Phillips’ thoughts that it presents a growing opportunity. Over the next five years the sector’s worth is set to balloon from $222bn to $269bn, according to a report titled ‘The Future of Global Corrugated Packaging to 2021’.

An industry looking at even bigger percentage growth in the next five years according to another Smithers Pira report – and one that is perhaps more easily accessible to most large-format PSPs - is the digitally printed textile market. ‘The Future of Digital Textile Printing to 2021’ values the current market at 1.17bn Euro and forecasts annual average growth of 12.3% to 2021.

So what’s new in this area for 2017? First to show its hand is Mimaki, which expanded its textile offering last year with its acquisition of Italian textile machine manufacturer La Meccanica and is now starting to bring new industrial textile printers to the market. At the recent Heimtextil in Frankfurt the company showed its new Tiger-1800B printer for the first time at a global exhibition. The machine, which uses reactive inks, is a high production device suitable for applications such as furnishings, flags and interior fabrics that Mimaki says is designed for companies seeking a volume printing solution. The machine has a maximum print speed of 385m2/hr, 600dpi print resolution and a maximum print width of 1.85m.

Stephen Woodall, national sales manager for textile and apparel at Mimaki distributor Hybrid Services, says: “We’re seeing an increase across the board in companies looking at delivering products on fabric. Whether it’s sportswear companies seeking to bring production back to the UK or Ireland, sign and display businesses wishing to offer modular textile display systems or grand-format print operations that want to replace alternative substrates with a textile option, the level of interest and uptake is substantial.”

We will look more in-depth at advances in this sector in the March issue, taking into account some of the other developments seen at Heimtextil. But also worth considering in the ‘industrial’ printing space is the rapid growth of printed decor.

Marcus Timson, co-founder of industrial print technology event InPrint, is convinced the commercial decor market - in particular printing onto items such as laminate flooring and luxury vinyl tiles - presents an immediate opportunity for large-format PSPs, along with the likes of wallcoverings where PSPs have already made significant inroads.

Timson highlights Canon’s Océ Arizona flatbed printers as the sort of kit many PSPs are already using for other work that could also be used to print these sorts of applications. “Canon’s stand at InPrint [held in Milan in November] was superb, a Milanese theme which was really well thought through. There was no print technology but it was like walking into this printed environment which was really clever and a great example of how you can use the technology you’ve already got in a different way.”

Another major theme in 2016 which looks poised to continue into this year is collaboration. Many printer manufacturers have found sharing knowledge and resources to be invaluable in bringing new products to market, with the likes of Fujifilm and Heidelberg and Screen and BHS Corrugated Maschinen recently teaming up to create new solutions.

An increasing number of manufacturers in all fields are opening dedicated innovation centres to facilitate such collaboration, so a large-format partnership in this area could be just around the corner. In March last year Fujifilm opened its first European Open Innovation Hub, located at the company’s manufacturing and R&D centre in Tilburg, the Netherlands.

Fujifilm Open Innovation Hub manager Pieter Van Genderen says: “We started with our first Open Innovation Hub in Tokyo in 2014 and wanted to achieve innovation on a global scale so also opened one in Silicon Valley, Santa Clara, in our Dimatix head office, and then this third one in Tilburg.

“What Fujifilm wants is to connect with other companies and organisations to collaborate on developing new products or improving products. We are actively reaching out to companies who we think have magic technologies that match or are complementary to our technologies.”

Though a multitude of technical developments are looking set to create a raft of new possibilities this year, it’s no secret that managing a large-format business in these times of economic and political uncertainty continues to be a challenge for many. But Epson’s McMullin says there are still plenty of opportunities out there, some of which may be close to home.

“I think everybody spends a lot of time and effort trying to find new customers, which is a very expensive thing to do, and they sometimes forget to look after their existing customer base. There are always more branding opportunities within your existing customer base and if you don’t exploit them then somebody else will.”