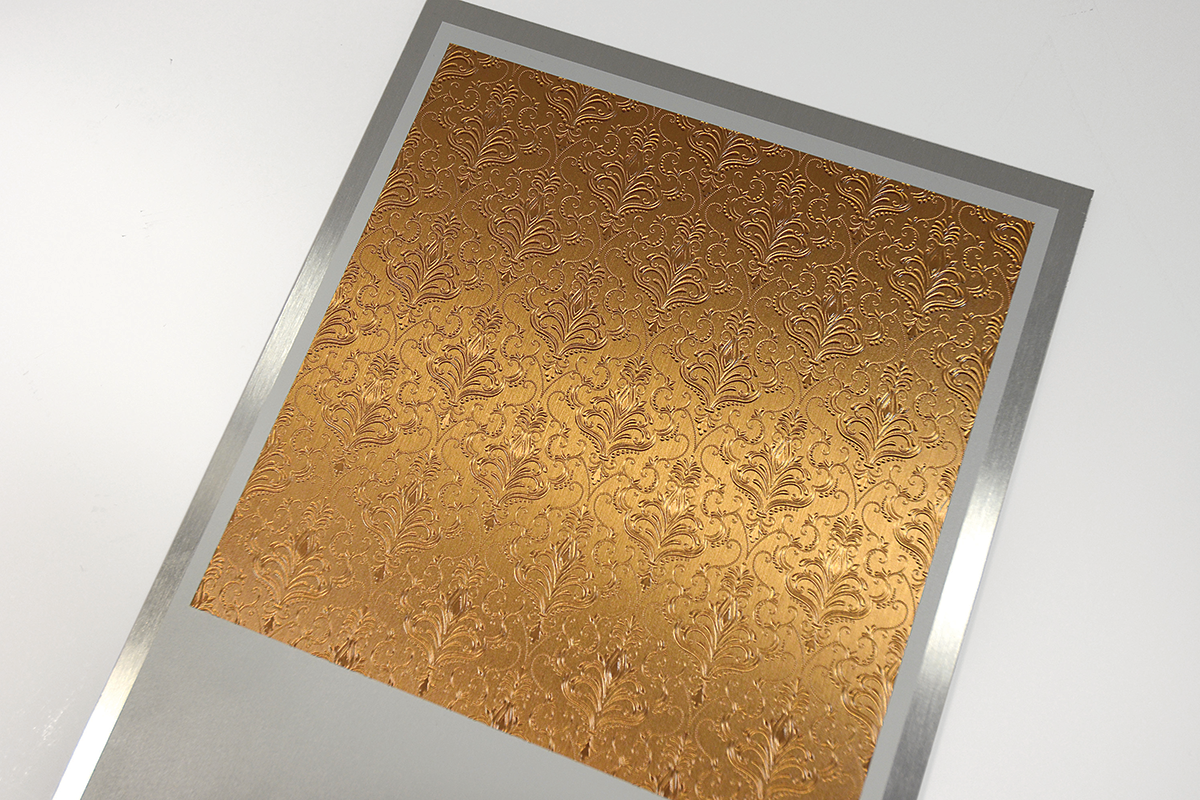 All PSPs are looking for an edge - for that little something extra that makes them stand out from the competition. The problem is that this ‘x factor’ normally carries a price tag. It often requires investment in a new piece of kit for instance - something that allows PSPs to offer more embellishments in-house say. Thankfully that situation is starting to change. More wide-format printer manufacturers are talking about the range of effects that can be achieved inline. So what’s now possible in terms of special effects on the current range of wide-format printers, and what innovations are coming down the line?

The increasing number of effects achievable on machines ties into the growing trend of customers asking for more flexibility from their printers, according to Phil McMullin, sales manager of Epson UK. “Basically we are trying to broaden what can be printed on our products,” he says. “Anyone investing in a printer these days for £170,000 wants to know they can print as much as possible in terms of the number of different applications on that one machine.”

Take the example of Mimaki’s range of LED UV flatbed and roll-to-roll printers. The manufacturer offers an expansive array of special effects options thanks to the combination of the “unique characteristics of the ink” and the manner in which it can be printed, explains Brett Newman, chief operations manager at UK distributor Hybrid.

“Acceptance and popularity of UV ink technology means it’s never been easier to add special creative effects onto print,” says Newman. “From producing multiple layered files to spot varnish finishes, the limitations lie in the imagination rather than the hardware. Whether this is created on a small-format flatbed, a printer/cutter such as the new UCJV Series or even at a grand scale on the 8x4ft and larger production flatbed machines, similar concepts and workflows apply and the creative - and, for the printer, revenue generating opportunities are endless.”

Simon Landau, head of sales EMEA at PrintFactory, says the increased demand for technologies that make special effects easier to achieve is being driven by the desire to give customers greater choice and a more tailored service.

Landau says a “multitude of special effects” can be created using the PrintFactory Editor, but the most popular effects are those produced with white ink.

“White ink can be used to back-up designs on clear film, bringing out highlights on dark substrates and masking white areas on metallic. These are becoming more popular as a result of greater accessibility to white ink and white ink printers, which has made creating these effects much less labour and time intensive,” he points out. “Other effects, such as lenticular, 3D raised image printing on a flatbed for a more textured result and gloss spot varnish are also being used more often, but at a lesser pace due to the technical and environmental conditions required to produce a high standard of finish.”

White inks are also a big area of focus for EFI, but the company has taken what’s possible to the next level with the introduction of new layering technology, according to Mike Wozny, senior product manager at EFI.

“White has been available for about 15 years, but with our layering technology we can take a cosmetic ad selling lipstick, for example, and do something with layering and the use of white to emphasize the lipstick on the model’s face so that it pops out on the graphic. This is done all inline - one time through the press,” he explains.

The same technology can be used to create flexible advertising applications. “With our layering technology we can produce a graphic that’s backlit so when the light is switched on you have one graphic - a sun for example - and then when the light is switched off the sun turns into the moon and it’s dark,” says Wozny. “From an advertising perspective this gives you double the revenue in the same advertising space because you can have two different graphics there.”

He adds that is also possible to produce metallics on the company’s printers. This is an area Epson also highlights on its Surecolor S80600 machines. On these printers you can put in white or metallic inks as and when you need them, says McMullin, adding: “That’s gone down really well with customers because generally there are not many jobs where metallic is designed in, so when you need to use it you want to be able to just pop the metallic ink into the machine.”

Although McMullin says that metallics have been around for some time, the big difference now from Epson’s perspective is the quality of the metallics that PSPs are able to produce on the company’s printers and the “reliability of the printers handling that metallic ink, which is quite difficult to handle without nozzle blocking. The ability to put metallic ink into the machine when you need it also reduce the cost because typically it’s been resident in the machine full time and ends up in your waste bottle,” says McMullin.

Effects are also an important area for Canon and its wide-format Arizona range. Wayne Barlow, head of graphics and communications at Canon UK, says: “A few years ago we started to develop something where we could facilitate multi layer printing in one easy operation. This means you can build up layers of ink automatically rather than it being a very manual process, which required customers to stop and raise carriage so they didn’t get head strikes.”

At Fespa the company launched Oce Touchstone, a solution that enables Oce Arizona users to print multiple layers, resulting in printed effects that mimic textured surfaces, embossing, metallic accents and raised lettering. Barlow says this texturing effect can be used to create prototypes by interior designers or architects. End users from these business sectors in particular are driving greater levels of innovation from manufacturers. But these aren’t the only sectors driving change, according to Hybrid’s Newman.

“Trends in personalisation and decor are the primary drivers of demand but there are practical applications as well, such as Braille, signage and packaging proofs for the visually impaired and creating sensory enhancing products,” he says.

“Customers today are looking for more creative and diverse ways of getting the maximum potential from their UV press investment,” he says. “With the introduction of leading edge LED curing technologies combined with the accurate positioning and control of the placement of the ink droplets with software such as Agfa’s Asanti, customers are now able to fuel their imagination beyond what was possible several years ago. Particularly in the areas of interior design and backlit applications which allows for the maximum impact for companies striving for something different than the norm.”

Indeed, Newman thinks the potential opportunities surrounding the development of new effects on wide-format printers are endless. “Like the world, print is no longer flat,” he says. “As a technology, these techniques are enabling printers to diversify, become more profitable and they assist customer retention. It’ll become ever more widespread as demand continues to grow, committing manufacturers to respond with further development.”

Wozny agrees, adding the opportunities to create print that truly stands out are huge, with customers driving further NPD and innovation from manufacturers.

“In terms of the market we serve they’re asking for more things to be done on our printers each and every year - more applications and a wider range of stuff,” he says. “A big part of our customer base spend 10-15% of their week developing unique and new applications. PSPs are always looking for new products and services to differentiate themselves from the competition and we work with our customers quite often to help them develop applications, so it’s a two-way thing.”

McMullin says developing new effects is also a big area of focus for Epson, although he believes that sometimes their importance is over stated. “We found that at first everybody thought the idea of metallic ink was fantastic - ‘oh great I want that’ - but when they actually installed the unit they discovered they’re only doing one job every three months, so the pragmatic reality is ‘I don’t really want it in the machine costing me money when I’m not actually got a job generating me some revenue’, which is why we allow people to put the ink cartridge in and take it out as and when they want to use it.

“People think special effects are top of the list, but when it comes down to it, if they analyse their jobs on a monthly basis they’re [effects jobs] very few and far between. It’s the humdrum bread and butter humdrum stuff that pays the bills - special effects are the nice to have thrills, the cherry on the top.”

While impressive in their own right effects achievable inline pale when compared with some of the more cutting edge stuff some PSPs are exploring, such as integrating technology like RFID tags or NFC into printed collateral. This push to offer customers value-added print is the direction the market is ultimately heading in, so the more effects PSPs can produce in-house the greater value they can derive for themselves. As for where future trends in wide-format effects are likely to develop, if you’re looking for clues you need look no further than the rest of the print sector, according to Landau.

“Once we see a trend take hold in the print industry, it’s not normally long before it moves into wide-format,” he says. “If we compare how white ink was used six to seven years ago to its widespread use today, I think we can expect the effects space to evolve in a similar way - especially as technology advances. It won’t be long before we see more forward-thinking PSPs take up special effects for jobs such as posters, billboards and even building wraps. Ultimately, as more PSPs learn what is possible with the technology we have today, we can expect to see effects becoming even more popular.”