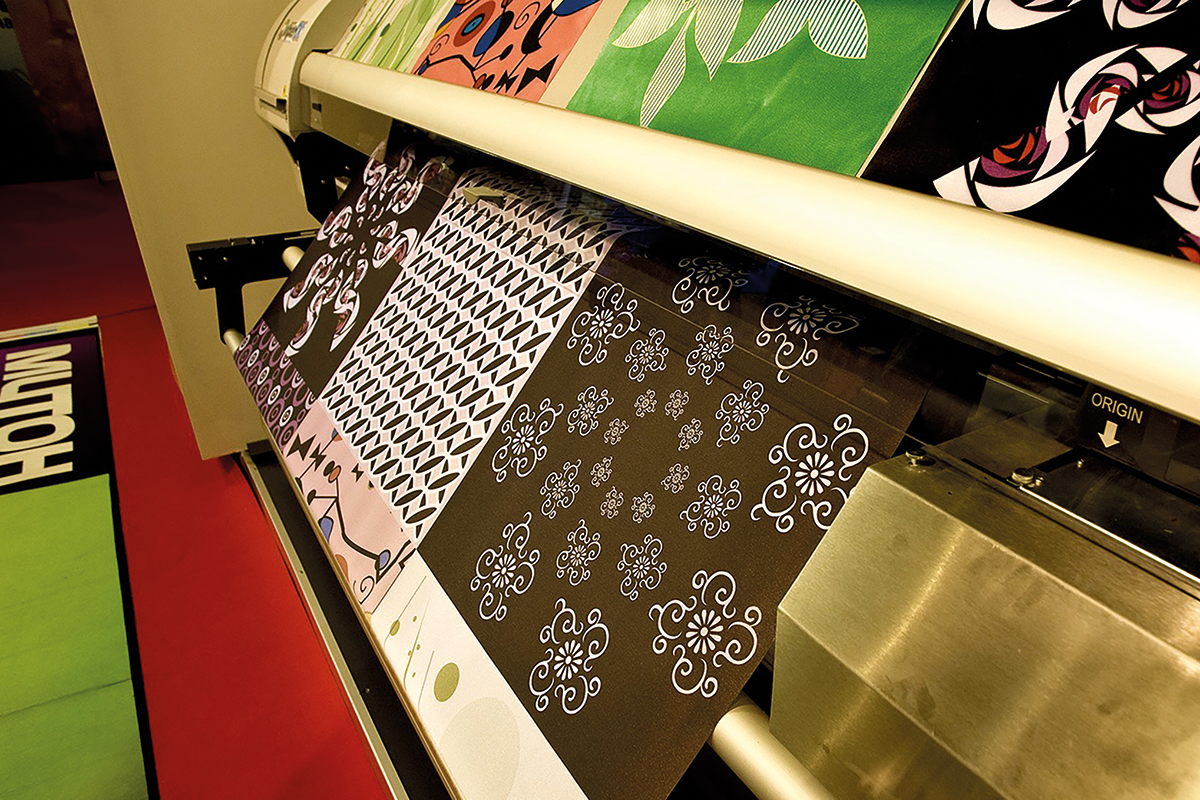 You’ve seen the figures - textile print is having a heyday. Printer manufacturers are pouring R+D funds into the sector as Simon Creasy discovers. But are the new machines ones for your purchasing list?

Few print sectors have seen as much innovation and new product development (NPD) brought forward by major equipment manufacturers as textiles over the last few years. The reason for this focus becomes apparent when you look at the market stats. Inkjet printing of textiles is one of the fastest growing print segments, with the worldwide market value rising to $1.88bn in 2018 - more than double its value in 2013, according to Smithers Pira’s ‘The Future of Digital Textile Printing to 2023’ report, which was published late last year. Over the same five-year period the volume of fabric printed digitally has grown from 548m square metres to 1.16bn square metres. And with Smithers Pira projecting values will continue to grow over the next few years, with the market reaching $3.75bn in 2023 - and 2.70bn square metres of fabric consumed - it’s little wonder that manufacturers are lining up to unleash further innovation on the market over the coming months.

So what machinery can we expect to see hitting the exhibition halls of print shows in 2019 - bearing in mind that it won’t by any means be all directed at large-format PSPs - and what clues do recent launches give us about the direction of travel when it comes to future NPD?

One of the busiest manufacturers over the last year or so has been EFI. According to Adele Genoni, EFI Reggiani vice president and general manager, the company has launched a new print model every quarter over the last 15 months. The latest iteration to roll off the production line was the single-pass EFI Reggiani Bolt textile digital printer, which debuted at an open house in Italy last year. The company claims the “ultra-high speed” machine is a “revolution to the textile printing market, providing users with high uptime and reliability, outstanding performance, superior printing uniformity and accuracy, long printhead life, and minimal maintenance needs”.

EFI also launched a new dye-sublimation printer at Fespa 2018 - the EFI Vutek FabriVu 340i, a 3.4m aqueous soft-signage machine - to add to the 1.8m Reggiani ReNoir Flexy, which has a production speed of nearly 200m2/hr; the EFI Reggiani Vogue, capable of printing a resolution of up to 2,400dpi with 16 printheads and eight colours; the EFI Reggiani Colors, which boasts 12 colours and can print at speeds of up to 560m2/hr; and the EFI Reggiani Bolt, with throughput speeds of up to 90m/min at 600 x 600dpi.

Genoni says the company has a “solid product development roadmap” for 2019, which will include the introduction of new printers and inks. “One of our main goals is to provide cutting-edge technologies and green solutions to the textile printing industry so that businesses can optimise their printing processes and consequently, generate more profits and reduce their environmental footprint,” she says. “We expect future R&D efforts in the textile digital printing sector to focus on technologies that enhance the productivity, reliability and eco-friendliness of machines and inks. In dye-sub for example, the next technical opportunities we are seeing is increased performances of direct printing with sublimation inks, increased penetration and printing uniformity, and enhanced dye sub performances on new, recycled materials that are now gaining momentum among several apparel brands.” 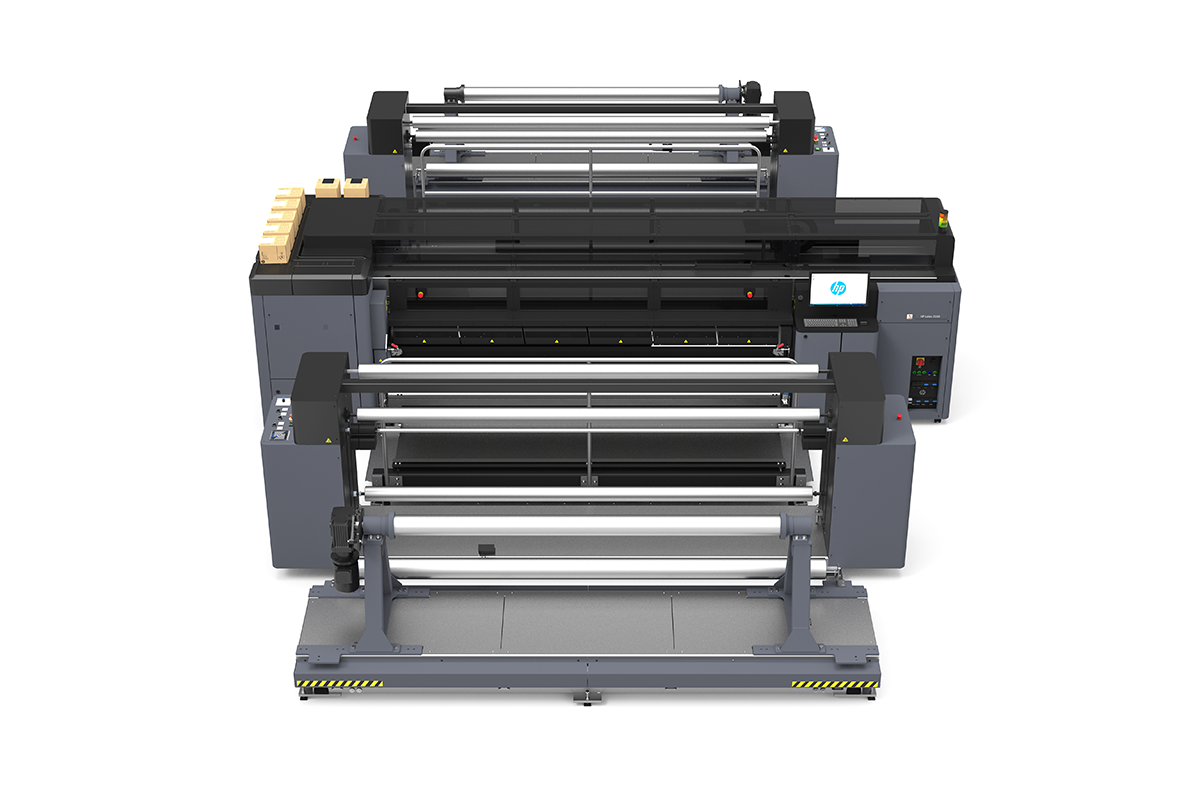 HP has also been busy on the NPD front, launching the HP Latex 3800 Jumbo roll product at Fespa in May last year. Javier Laraz, HP large-format production director, GSB EMEA, claims it is the “first real jumbo roll solution for flexible sign and textile printing in one device,” which allows users to “expand their offering into new, high-value applications while also opening fresh creative ideas and concepts for sign and display”.

As for future NPD Laraz says: “HP is always looking at new markets and although we’re not able to comment at this point, HP will have a significant presence at Fespa 2019. The R&D efforts of our company are not discussed, but we can say that in the last years we have brought innovation, speed and colour to the market and we will continue to do so.” 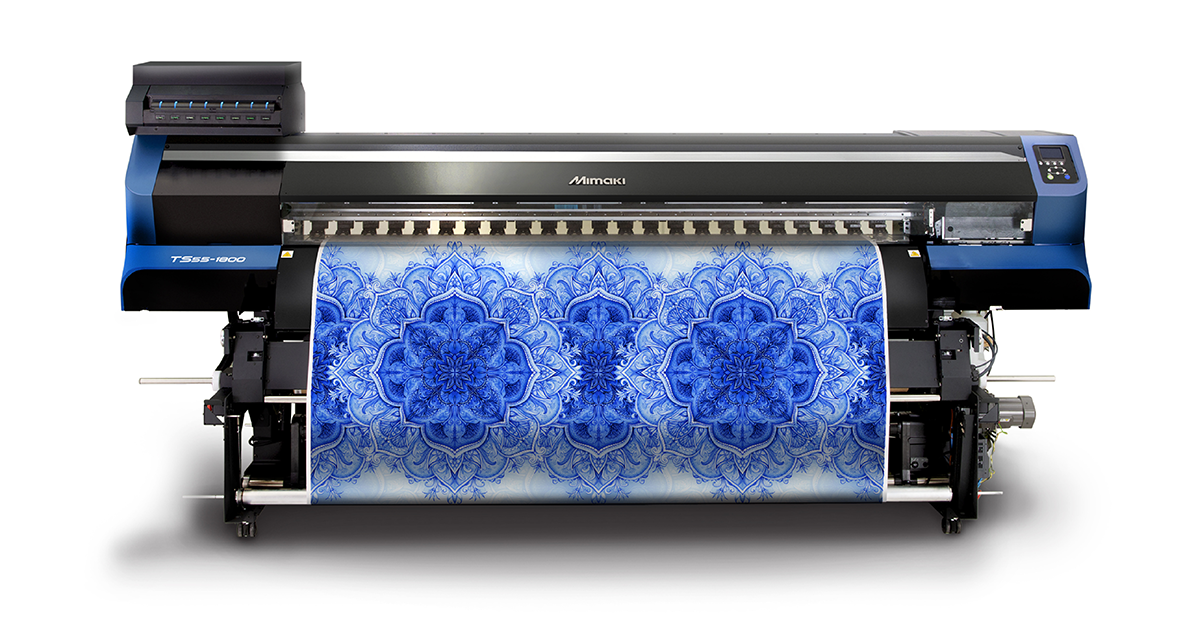 ne of the more recent textile print device launches is Mimaki’s TS55-1800 dye-sublimation printer, which was unveiled in late 2018. The 1.9m printer, which can print at speeds of up to 140m2/hr, is designed to print to transfer paper, prior to pressing onto polyester for the production of sportswear, apparel and fabric graphics, according to Brett Newman, Hybrid’s chief operations manager.

“The Mimaki TS55-1800 addresses the demands of bringing garment and sportswear manufacturing closer to home,” says Newman. “With its inbuilt expansion, companies can add in the ability to respond to increasing demand without investing in a new printer - yet when the time comes to truly add capacity, the capital costs of the TS55 are sufficiently competitive that it becomes even less of a challenge.”

He adds that the significance of the introduction of the TS55 should not be underestimated. “It sits at a very keen price point in a sector that’s rapidly expanding thanks to increasing demand for short- to medium-runs of quality fashion, sportswear and retail graphics,” says Newman. “With the new TS55, we’re very well placed to answer that need and deliver a solution that can both grow with businesses as their requirement expands and at the same time, lower their running costs - it’s a winning formula and one to watch for 2019.”

Another company with high hopes for 2019 is Kornit Digital. Last year Kornit launched its high definition (HD) technology in the form of the Avalanche HD6 in January and the Storm HD6 in October, and just last month it announced the Atlas heavy-duty direct-to-garment printer designed to deliver a typical annual production capacity of up to 350,000 impressions.

“After adding recirculating printheads to the systems, HD reduces the drop size from 85pl to 35pl,” says Oliver Luedtke, director of marketing EMEA at Kornit Digital. “In combination with a new ink that has more concentrated and brighter pigments, the overall ink consumption is reduced by more than 20% compared to the previous product generation - directly translating into 20% lower cost per print and a refined hand feel. In 2019, Kornit will continue to improve the retail quality of Kornit-printed garments and will keep making the process more robust and faster.”

These are similar areas of focus for Mutoh, for which the textile print sector is a growing business according to Dirk Devroye, marketing coordinator Mutoh Europe. He says the company - like many others - has detected a shift from “centralised production and stocking of prints made with analogue equipment towards local and on-demand production of digitally printed textiles, specifically linked to the key benefits of digital inkjet technology. There is also a new trend towards direct printing on natural fibres like cotton using water based pigmented inks for applications such as home furnishings, upholstery and fast fashion”.

The latest additions to Mutoh’s textile printer portfolio are the dye-sub ValueJet 1948WX capable of printing at up to 194m2, and the direct-to-textile ValueJet 1938TX. 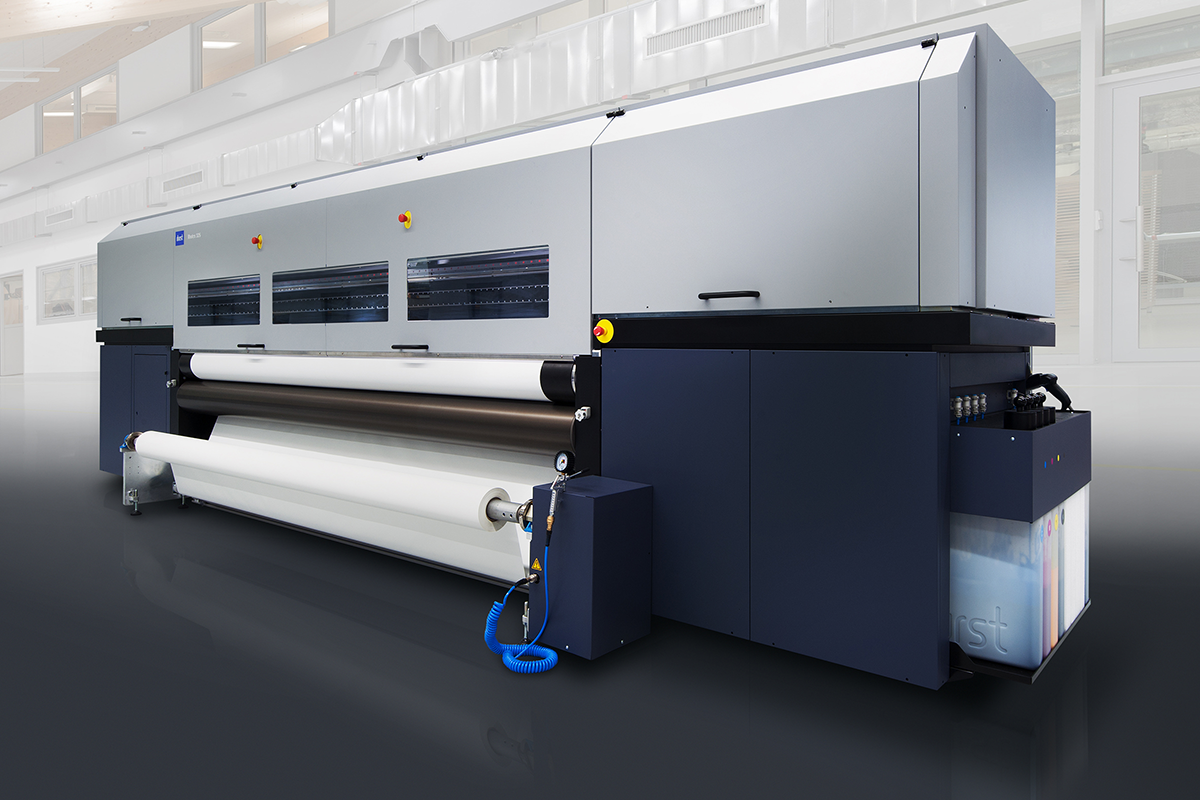 At Durst, the focus of innovation is very much on the dye-sublimation market and its Rhotex 325 fabrics dye-sub printer. Peter Bray, managing director of Durst UK and Ireland, says that the company has recently noticed a significant increase in UK customers requesting dye-sub applications and he expects this trend to continue to gather momentum.

“What we have seen in the last couple of years is our customer’s customers specifying that if they’re producing in-store retail [work] it has to be dye-sublimation,” explains Bray. “The demand is coming from the print specifiers, and they’re asking for dye-sublimation because of the odour on UV print, even though there is very little odour from our Rho FLT ink.”

He adds that, had you walked down London’s Oxford Street of Regent Street a couple of years ago around 80% of soft signage in retail stores would have been produced UV, but the balance has now shifted towards dye-sublimation. As a result, he says the market can expect to see the company launching new products that tap into this rapidly growing part of the market.

“There will be other products from Durst that come out in the dye-sublimation market, but I don’t know if these will be launched in time for Fespa,” says Bray. “Moving forward we will potentially look at dye-sublimation products that allow customers who have lower volumes to enter into that market as well.”

Also targeting the dye-sub space is Epson. In late 2017, it launched its new ‘flagship’ dye-sublimation textile printer, the SureColor SC-F9300 and a few months later, in January 2018, it unveiled the direct to garment SureColor SC-F2100, which replaced the SC-F2000 model. The latter featured a host of enhancements, including “improved speed and reliability” and offered printers the ability to create their own print designs using Epson’s Garment Creator software, according to Heather Kendle market development manager Epson Europe. She says the company is “gradually adding to the range we’ve got in this sector” with Epson spending circa 1.5m Euro per day on research and development.

In terms of future innovation Kendle thinks some of this will be driven by ‘industry 4.0’ and a growing desire from PSPs for greater levels of interaction with their machines. “We are seeing a lot of development going on that will help improve productivity and enable people to see what’s going on with their devices so that they predict failures and improve uptime, for example,” says Kendle.

And as per the bullish projections for growth in the textile sector over the next few years that have been made by the likes of Smithers Pira, Kendle sees a healthy future ahead both for end users and for suppliers of textile printing equipment.

“You are seeing some people who traditionally were not in the textiles market who are now starting to look at it as a new opportunity because some of the more traditional markets have slowed down a lot. Take the signage and graphics, which is currently running at around 0.5% compound annual growth, whereas textiles is running at 7% [compound annual growth] and is predicted to continue to do so until about 2023,” says Kendle. “We are also seeing people who were doing screenprinting who are adopting the technology and also there has been quite a lot of online activity driving growth as well with companies like Amazon moving into textile production.”

Thanks to a combination of factors you can expect to see a raft of innovative new textile printing equipment hitting the market to meet the needs of a rapidly growing and evolving customer base - some of which could well be deployed by PSPs, but plenty of others that will be used by other textile print specialists and newcomers. It’s clear that keeping abreast of technological development across the whole textile print gamut is going to become increasingly challenging, yet increasingly important for PSPs to understand their strategic positioning in a rapidly evolving marketplace.