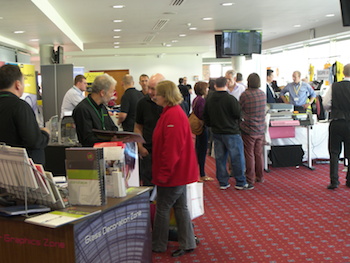 Martin Morrissey, MD at Co-op Events, which runs Newtech: The Wide-Format Printing, Displays and Finishing Show, argues that new style trade events such as this are the way of the future.

Having experienced Sign and Digital, Ipex, Drupa et al, both as an exhibitor and as a visitor over a period of many years, like many others I felt strongly that there must be a better way to get new products in front of the print and graphics market.

From a visitor perspective, I felt most trade events had become trials of endurance with a great deal of frustration because of the travel and the sheer numbers of both exhibitors and visitors involved. I certainly wasn’t disposed to invest my hard earned capital and just used the shows to catch up with friends.

Over the same period I had also participated in several ‘mini’ events around the country and when the opportunity came to create a co-operative event it worked well; over £1m in exhibitor sales after six months on the first show.

So Co-op Events was born, with a series of Newtech events targeting the wide-format market and showing HP and a group of complimentary products. The current Newtech series - the next event being at Corby on 18-19 November - features Roland and an exciting group of new products demonstrating just how versatile large-format printers can be nowadays.

So what’s the benefit of such small shows for the visitors, and how do they compare with the larger and more established ‘traditional’ events?

Well, firstly, we take the events to the local areas where the main production for specialised markets are centred, so visitors don’t have to travel hours to get to London or Birmingham etc. That in itself is a key draw for many, and I can quote visitors to previous Newtech events to prove it:

“I spent four hours at the show and saw everybody. If we’d been going to London or Birmingham, we wouldn’t have even got there yet! There were lots of new products and we had time to understand the technologies. We will be investing!” says Julie Savage of Savage Graphics, for instance.

James Hopkin, production manager at Ability Digital Print echoes similar sentiment, having been to the Wetherby Newtech that ran 30 September – 1 October. “It was a great little show. I found it very useful to speak with a few of the exhibitors and with it being only a small show it had minimal impact on my work schedule as I was only out of the office for a couple of hours.’

Gary Partridge of Happy Dog Image Solutions was out of the office for a somewhat longer period, and rather unexpectedly, but all for the right reasons: “To be perfectly honest, I went down to the show with a colleague and our intention was to be there for two hours. I think we were there for seven. It was just a breath of fresh air really. When you go to the NEC and the place is absolutely chocked out, quite often I feel a little bit phased and certainly by the end of the day I think everybody is fatigued. At Newtech you got the information that you needed, saw the people that you wanted, got fed and watered and just had a fantastic time.”

But taking Newtech to various locations is only part of the reason why visitors like it. We restrict the numbers of both exhibitors and visitors so that each visitor has plenty of time to ask in-depth questions and see live demonstrations with every exhibitor.

James Marsh of Jam Graphics argues the case for such showcases: “At the big shows you can’t get to talk to the ones you want and you are under pressure to speak to others who jump out at you. Newtech is completely different. I’ve discovered companies that will be useful that I didn’t know about.

Thirdly, as Newtech’s organiser we do our best to avoid any competition amongst exhibitors so that they don’t have to worry about who is next door or who is talking to who. They can take their time with each visitor and really educate them on new technologies and products.

Taken as a whole, this event pattern helps to create a warm and friendly atmosphere where visitors can relax, not be hassled, get to talk to the people they want to talk to and generally be more comfortable and thus receptive to information on new opportunities and revenue streams.