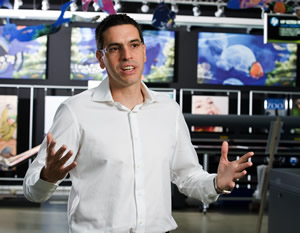 HP will divide into two next year, but what will this mean for the professional print division? Nessan Cleary considers.

So, HP is to split itself into two halves, with all of its printing product operations, including wide-format as well as its big inkjet machines and consumer printers lumped in with the personal computing part of the business to form HP Inc. This company will keep the HP logo and be headed up by Dion Weisler, currently executive vice president of HP’s Printing and Personal Systems division.

Everything else, including the managed services with data storage, servers and business computing will become Hewlett-Packard Enterprise and be led by the current CEO, Meg Whitman, who will also act as non-executive chairman of the HP Inc Board.

According to HP, both companies will be well capitalised and both will be publicly traded Fortune 50 companies. Ronen Zioni, as seen above, is the marketing director for HP’s Graphics Solutions business in Europe, he says that both the proposed new companies are of a similar size, adding: “Both bring roughly $6bn to the bottom line so they are both healthy businesses.”

The decision comes as part of a five-year turnaround plan announced by Whitman back in 2012. At that time she identified a number of failings in the business, including having too many products and operating in too many locations, leading to a drive to cut costs and employee numbers by some 34,000 down to around 300,000 people now. But she also invested in R&D, cut debt and improved cashflow.

However, the underlying problem lies in the PC business, which generates huge revenues but very small profit margins. The issue has largely been that modern computers have been reduced to a collection of components that have seen relentless price cutting in a race to the bottom. The result is that most computers now offer more capabilities than most people need and can be produced more cheaply in the Far East. The situation has not been helped by the growth in mobile computing, particularly tablets, where HP has failed to make real inroads despite investing in Palm. Nonetheless, although the profit margins are relatively low it’s a very high volume business.

The consumer printing business isn’t in much better shape. The profit margins on the ink are better, but people print less and store more data in electronic form.

The professional printing business is generally strong. There is a lot of shared technology through the use of thermal printheads. This includes everything from the latex wide-format printers through to the Inkjet Web Press. The exceptions are Indigo and HP Scitex, which has a good portfolio of large-format flatbeds and has extended this into packaging with the FB15000.

Some of the DesignJets and smaller printers are mainly sold through dealers as consumer sales. But the bigger presses rely heavily on enterprise computing systems.

Zioni says that HP is so large that the split won’t make much difference, pointing out: “To get something going with people that are focused on different business it's always like dealing with another company. But now it will be part of our agenda to make sure there are these leverage hooks.”

HP has also used its Finance Services arm to help sell some of the bigger presses. But this too will be part of HP Enterprises, though Zioni says that HP is currently working out service level agreements between the two, pointing out that the Graphics division will be the largest customer: “They are not going to give up our business and we are not going to give up their abilities. They will be leveraging some cross-selling opportunities and we are busy defining this.”

It remains to be seen how well HP will manage this. But clearly the future of the professional print division is now tied with the consumer computing systems - though it’s hard to see any real synergy between printing and personal computers - and will likely depend on how strongly its management defends its corner. Meanwhile the company has identified 3D printing as a major growth area for HP Inc and has just announced a new Blended Reality system.

Businesses in shared workspaces missing out on grants

Chili publisher v6 due out

Welcome to my world

Why are you still not happy with off-the-shelf MIS options?

The show must go on