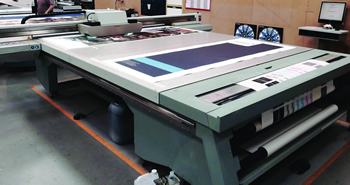 Is there now a secondhand market for UV flatbeds? Graham Thompson, MD supplier Matoria says there is.

Want a UV flatbed but can’t afford new? Then what about nabbing a used machine? Graham Thompson, managing director of Matoria says good machines with plenty of life still in them are now coming on the market, making the secondhand scene a viable option for those wanting to get in on the action at a lower price point, or just wanting a second machine as back-up/extra capacity.

He points out that its now a decade since we saw the emergence of high-speed commercial inkjet machines - the technology at that time closely guarded by their manufacturers. Thus manufactures had control of the used machine market until the second or third generation machines were out in the field in numbers, performing reliably, and could be supported by skilled, trained independent engineers. Now we’re there.


“The ability of UV flatbed inkjet printers to handle so many different substrates means many new applications are fuelling demand for this technology. During the last five years, as the market and technology have matured, Matoria has seen the used machine market slowly gather momentum to the point where it’s now a real option for those looking for a cheaper-than-new printer, but that is still a headache-free, sound investment.”

So what about reliability and maintenance on a used machine? Thompson says: “Importantly, there’s now a pool of very good skilled independent engineers for installing and supporting most large-format used UV flatbed printers throughout the UK. Most have been trained by the manufacturers of the kit, and at Matoria for instance, most of the spare parts can be sourced. We also have the resources and specialist contractors to relocate these large machines, moving them safely from one site to another.”

On the consumables supply front he adds: “There are some very good high quality third party inks available to the end user giving choice as well as cost savings; this a very competitive market and it pays to shop around. Matoria doesn’t sell inks but is happy to give independent advice.”

Aiming to address common issues raised by those considering a used machinery purchase, Thompson says: “We always take great care in selecting used machines to sell, and many have been on maintenance contracts from new. It is important to look at the quality of the heads and consider the costs of replacements. However, today head crashes and the need to change heads is greatly reduced compared to ten years ago.

“The second important consideration is speed. Various levels of quality such as express, fine art, production modes are talked about and you will see them on brochures. Again important to know what speed you can run at to achieve the quality you need. Typically a good used flatbed will be between £30,000 - £50,000 delivered and installed, and similarly with the 3m and 5m dedicated roll-to-roll machines and hybrid printers unless very new. The very high-speed models will be more, but their cost new is £200,000+ so the prices rise accordingly.

“Once you have chosen a used machine, there are three options regarding ongoing support. Firstly, you can use the manufacturers contracts, but this can be expensive in relation to the cost of the machine. Secondly, there is support on a time and materials basis with the manufacturers or independent engineers. Thirdly, insurance backed maintenance cover is available. These are worth consideration, but in terms of keeping your kit up and running, the most important thing is the most obvious - preventative maintenance, on a daily basis. By following manufacturer and engineers suggestions and guidelines, your used machine can be relatively trouble free.”