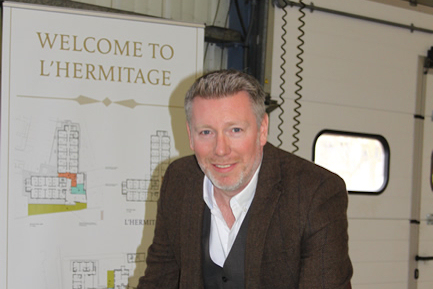 Scams affect every industry, but there are a couple of nasty ones targeting the large-format print sector right now. Scott Conway of Venture Banners highlights those he’s come across.

We’ve all laughed at the email from the wealthy African Prince offering a cut of his millions in return for help to get those millions out of the country. ‘Who on Earth would fall for that?’ we snigger as we hit the delete key. Unfortunately that is the easily spottable tip of a very large iceberg of cons, and worryingly there are a number of scammers out there that seem to be targeting printers in general - and large-format printers in particular. Out of interest and for research purposes we at Venture Banners followed several scams through and although most are shallow and easily identified some are quite ingenious….

We had a quotation request for 100 banners with the words ‘Arms to the Poor’. The broken English contained in the email and the content of the banner (we’re guessing that should have
read ‘Alms’) immediately raised suspicions, however we were interested to see what happened next, so we responded with a ludicrously high price, which unsurprisingly was accepted straight away. The ‘client’ then proceeded to give us his credit card details with instruction to take an additional £1,000 which we were to pay to his shipping company, as the banners were going out of the UK and would be picked up by a shipping company, the bank details for which were of course included.

We did some checks. The credit card was genuine and would go through for the full amount including the shipping costs. So what could possibly go wrong?

Well, quite a lot actually. We’d already tracked the IP address of the original email to Ghana which raised red flags, and basic enquiries found that the credit card being offered belonged to a gentleman who resided in this country. More red flags.

So what would have happened if we had gone through with the transaction? Well it’s simple really, once the gentleman in the UK discovered his card had been used fraudulently, the monies would be clawed back from us by the card company and we would of course be unable to recover the £1,000 paid by us legitimately to the shipping company - which, incidentally, further investigations showed didn’t actually exist. The conmen would have ‘earned’ £1,000 for just a couple of emails - easy and lucrative.

The thing is, we were having lunch with an industry friend not long after and he told us of this amazing deal he had put together on a large banner order. It all sounded terribly familiar. Unfortunately he had paid the shipping company and predictably the credit card payment to him was clawed back. No one ever came to pick up those banners.

This is brutally simple but very effective and seems to be organised in this country. Someone requests a quote from you for ten roller banners. They like the quote and ask for a pro-forma invoice. You’re paid. In fact with online banking, you can see the money sitting in your account.

Only by mistake they’ve overpaid you by £1,000. Realising their error they phone you claiming an admin error and ask if you wouldn’t mind transferring the £1,000 overpayment back to them. Obviously they’re new customer and they’ve just spent a lot of money with you so your customer service reflex kicks in. ‘Of course’ you say ‘I’ll do it right now’. Wrong!

If you look very closely at your bank account, you’ll notice that even though the customer’s money is showing in your balance, they’re not actually cleared funds.

Guess what happens next……yep you guessed it, the money paid in by the customer is actually a cheque paid in over the counter and is destined to bounce in five days’ time, giving them ample time to fleece you. You are then left £1,000 out of pocket and, if you’re really unlucky, ten roller banners down as well.

We’ve managed to save several people falling victim to this scam because the scammers are lazy and use the same artwork for the roller banners every time. Hopefully, this heads-up will stop more print companies falling for the same thing.