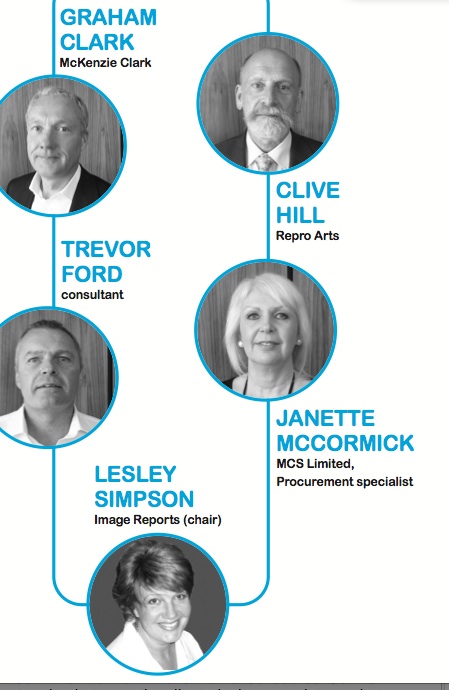 o what opportunities and difficulties do you face? Graham Clark of McKenzie Clark, Clive Hill of Repro Arts, consultant Trevor Ford, Janette McCormick of MCS Ltd, and Lesley Simpson, Editor of Image Reports magazine discuss these issues in a roundtable.

In a world where the focus tends to be on short deadlines, the idea of discussing a materials spec up to two years ahead of running the job might seem ludicrous. But it’s happening, and for good reason; media choice can be the point of difference clients are seeking. Get in early enough to talk options, perhaps even specific substrate development, and you become a true partner rather than mere print supplier.

“Business teams working on campaigns are much more joined up in their thinking than they used to be and will pull together everyone they need to deliver a message to best effect. And they will build liaison time into their time to market schedules. So I’ve worked on jobs where brainstorming between the client, designers, printer, substrate suppliers starts over a year before delivery is required,” stressed procurement specialist Janette McCormick speaking at a Round Table discussion group held by Image Reports in London in June.

The event, sponsored by board producer Katz, was initiated by the high level of activity in wide-format digital inkjet printable substrates development and the parallel messaging that as printers in this space ‘you’ve never had it so good’ when it comes to breadth of offering and thus the chance to differentiate your print options. After all, isn’t there now a material for any conceivable job?

But we know there’s so much more to the story than that as the Round Table panel debated. And communication is key. Joined-up-talking is what it’s all about if this discussion is anything to go by; substrate developer and supplier, printer, specifier, designer etc. transferring knowledge to build projects that deliver something worthwhile for all involved. “What is needed is a truly collaborative approach,” said McCormick to nods of ascent from around the table.

“Relationships between printer, their substrate suppliers and clients are shifting and have been for some while,” said Graham Clark of McKenzie Clark (part of Chime Communications). “We work more and more with substrate manufacturers directly, talking about specific types of jobs and where quantities are large enough, they’ll even make materials specifically for us. We’ve had self-adhesive products ‘tweaked’ in under six months, and new ones made in 12 months. This is having spoken to clients about what they’re trying to achieve and coming up with suggestions – some clients will speak to us two years in advance of a big job so we can go through a substrate development process if necessary. We’re finding more clients now want to be involved in that discussion.”

It is a discussion however, that not all clients are in a position to have according to Clive Hill of Repro Arts. “The problem is that there is a real lack of knowledge when it comes to those buying print. I see a tendency for those not properly informed to pick up on media brand names without actually knowing anything about them or the alternatives,” a point picked up by ex-Bezier man Trevor Ford: “We found that people were often stuck on brand names too. While we seemed to communicate to the client quite well in general, we found that when it came to substrates there was an issue, even though the teams were saying they were making suggestions. Perhaps it’s sometimes about not just educating the client, but educating the printer and relevant internal teams about what’s achievable with the various media.”

McKenzie went a step further: “Part of the problem is that manufacturers are good at producing good specs on materials – but they’re not good at saying being straight up and saying which applications they are best for, and certainly not on saying what they’re poor at. And consistency and reliability, especially for applications that require coatings, is still an issue.”

“So people opt for brand names because they think it will give them some form of protection,” added Hill.

“At the end of the day, the whole project team needs to be better informed,” summed-up McCormick. “There is certainly a problem in getting product detail knowledge up the supply chain. Part of that problem is that print procurement teams and the printer they use need to work more closely together – not as two separate silo teams.”

Where the message does seem to be getting through is on ‘green product’, where the debate over premium pricing has tended to dominate the discussion over previous months, if not years.

“Presenting ‘green’ products to clients has sometimes been difficult because of the pricing issues, but we’re seeing that pricing on such products now coming down in line with other materials so we’re starting to have proper conversations with people about using them. They are proving a means to getting into customers where we’ve never had access before, so these materials are really offering new opportunities for us,” enthused Hill.

Clark was similarly buoyant about the opportunities afforded printers by the more environmental substrates. “I agree that greener media is a major opportunity. More brands are making promises about the suppliers and materials they use and if you can, as a printer, provide certified supply chain information then clients will accept and pay more for it.”

But McCormick was somewhat more reticent: “I think cost is still a real issue. I would not pay more for a greener product unless is provided an exceptional point of difference.”

“It’s why the collaborative approach is so important then,” stressed Ford. “If you are talking to a client you can explain that overall, the initial cost might be offset by the messaging its use sends out to the market, plus there might be less waste because of better recycling opportunities etc. so maybe you will save cost there…and more volume usage will drive prices down.”

“The thing is, large corporations actually expect a collaborative approach nowadays – they understand the optimisation from doing that, but so much depends on an organisation’s heritage and how it is used to dealing with suppliers. Some of the smaller companies are actually more flexible,” added McCormick.

“Green products aside, there are new materials coming to market that really do allow you to start off a conversation with clients,” followed up Ford, recognising Hill’s earlier comment on the topic. “Certain companies, perhaps the larger ones, may not bend because price may still be what it’s all about – they expect you to constantly offer better solutions but for no more money. But there are some materials that offer such unusual properties that they do create the basis of a discussion at least.”

“And the competition to bring something new to market is changing the way substrate manufacturers operate too,” added Hill. “Where we want lower volume specialist materials we mainly just buy off the shelf, but in the higher volume market it  really is more of a two-way conversation now about what we want and what they can deliver.”

“Yes, some manufactures still insist you talk to their distributors, but if you want to get involved in R&D it has to be direct with the manufacturer,” added Clark.

“And those manufacturers, as well as the printers suggesting various substrates, have to be prepared for clients to do some checking up on the various claims being made by both parties in relation to the media they promote,” said McCormick. “When it comes to green products for instance, shareholders are now requiring testing and proof of claims.”

“We’ve certainly noticed that clients are doing much more research themselves into just how biodegradable certain materials really are etc. And as a printer, we’ve had to do audits on how much energy was actually used to produce a particular project, including the distance travelled by substrates etc. That’s a problem – a lot of materials manufacturers don’t know the figures or have matrices relating to transport never mind the carbon footprint of producing the materials etc.”

“And that is going to become more important from a client perspective. We too have been asked by clients how far substrates travel,” added Hill. “And of course we’re asked about our own environmental stance – do we recycle internally etc.”

“And how the clients themselves dispose of the materials is another consideration and part of the bigger discussion between all parties involved in the product chain, stressed Ford, to be met with McCormick’s response: “At the end of the day, it is all about the bigger picture. Perhaps it’s worth a company paying more for a substrate if it can prove it’s part of a closed loop process – because that could be a big enough point of difference.”

The discussion naturally turned at this point to the potential eradication of certain groups of substrates, PVC in particular. But it was clear that it’s got plenty of life left in it yet. “PVC simply does a great job for the price and despite everything, while I’m not saying it’s green, it’s not the anti-environmental media it’s sometimes considered either. For a start, it can be recycled,” pointed out Clark.

“And maybe education within the marketplace plays a part there,” added Ford. “Perhaps more collaboration among all the parties means people are realising it can be recycled and isn’t the baddie it was considered.

“The thing is, educating the whole market is imperative - and you must not forget how important a part historical conditioning has on how and what companies will specify, stressed McCormick. “Yet, clients really want to understand how using different substrates can help drive their bottom line/branding – whatever they are trying to achieve with their print project. They want to understand the point of difference.”

“And we are seeing that most clearly in the UK with textiles, where increasing numbers are attracted to it because they can clearly see the value of switching to it,” illustrated Clark.

“We’re back at where we started,” added Ford. “If those you are talking to have already decided on the print they want and scouted the market in relation to job spec you’re merely talking price. It really is all about getting in to the discussion much earlier and discussing differentiators, where substrate choice can be a real topic for debate.”