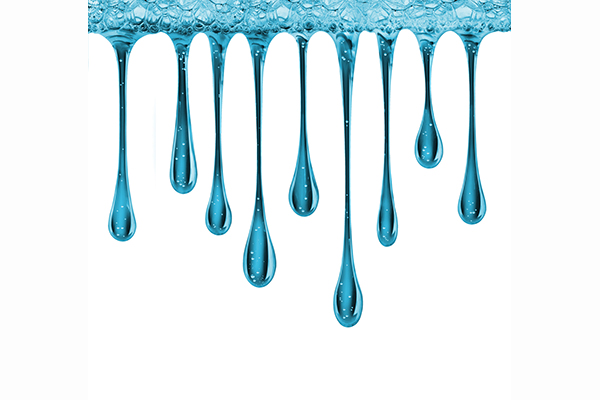 Walter Hale takes a look at Rapid Liquid Printing and its development potential.

It used to take decades, even centuries, to invent a new form of printing. Now one seems to spring up every few weeks. Those sceptics who said 3D printing would never catch on were half right - it has not been adopted on the scale, or at the speed, that was predicted - and now it has a new rival: Rapid Liquid Printing.

What is Rapid Liquid Printing (RLP)? It has been developed by the Massachusetts Institute of Technology and furniture maker Steelcase and sprang out of research to overcome some of the limitations that have held back 3D printing - the process itself is slow, you can only use a few materials (many of which are poor quality when compared to industrial materials) and you can’t easily make very large things.

As developed at MIT’s Self-Assembly Lab, RLP starts with a big tank of gel. Using a nozzle attached to a CNC machine, a two-part liquid polyurethane is extruded into the tank of gel. The two liquids mix together, creating a solid object in minutes. The printed object is removed from the gel and washed off with water. The product is then complete - there is no need for a curing process. The only restrictions on the size of the object are the size of the tank and the quantity of the gel. Tests so far suggest this process can print a piece of furniture in minutes.

So what kind of gel are we talking about? The wondrously named Skylar Tibbits, co-director of MIT’s Self-Assembly Lab, told ‘Wired’ magazine: “The gel is similar to a hair gel or hand sanitiser and has two key functions. The first is that it can suspend objects so we aren’t fighting gravity, and we don’t require layer-by-layer printing or to support materials which are time consuming to print. This means a part can be printed quickly within the gel and then removed and washed off with water. The second is that the gel self-heals after the nozzle has passed through. This allows you to continuously move and print within the gel and not create tunnels or cavities which would fill up with printed material.”

The gel takes about an hour to mix and, as soon as it is produced, it works to suspend the printed materials. If the printed object is extremely dense, the composition of the gel may have to be altered slightly but Tibbits says: “We’ve been able to suspend plastics, foams, even metals without any issue.” His team were inspired by synthetic biologists who 3D print biological materials into agar, a jelly-like substance that comes from algae. The other clever thing about RLP is that it uses regular industrial materials, which widens the scope of its potential applications.

The creative potential of RLP was showcased recently at Milan’s furniture fair with the team printing an experimental table-top in the Bassline collection for product designer Christophe Guberan. Created in a 1m long tank, this table-top is the largest object yet created by MIT’s Self-Assembly Lab. This intricate design took 28 minutes to ‘print’. In other tests, the team have produced objects in 10 minutes that had taken 50 hours to make using 3D printing. But just how large are the objects RLP can print likely to get? Tibbits says it is unlikely to be able to create products on an architectural scale, but it could be used for medium-sized objects such as parts for cars and airplanes.

The Self-Assembly Lab has form in this area. It has already pushed the boundaries of 3D printing into something it calls 4D printing - essentially using 3D printers to produce material that will grow and change on its own. And the list of new projects it is working on is long, varied and eclectic, encompassing everything from shoes that adapt to their wearer to woven office materials and large reconfigurable robots. It sounds like the kind of lab you sometimes see in movies where boffins in white coats beaver away at the best of a villain who wants to conquer the world but it is one of the labs where the future is being invented.

After almost a decade of experimentation, the team at the Lab were commissioned by office furniture company Steelcase to imagine a technology that could create a table-top in minutes and explore what that could do to the processes of manufacturing furniture and designing it. RLP is the Lab’s answer to that brief.

MIT and Steelcase aren’t the only ones exploring the potential of RLP. The 3D print company Carboncraft and Futurecraft, the innovation arm of Adidas, have announced that they will launch a 3D-printed shoe by the end of the year, created by a process they call Continuous Liquid Interface Production (CLIP - which is, you must admit, a more memorable acronym than RLP) which uses an ultraviolet laser to transform light-sensitive liquid into a solid. Carboncraft and Futurecraft say they can print the sole of a shoe in ten minutes, which means this process isn’t as fast as RLP yet - Tibbits can produce an item of furniture in that time - but its inventors say it is at least 25 times faster than other forms of 3D print.

Yet the investment by Adidas does suggest that liquid printing - in whatever exact form it develops into - may yet transform manufacture in the way that conventional 3D printing was supposed to do. Steelcase is certainly excited by the technology - and the scope it gives them to meet what it says is a growing demand for customised and personalised office furniture, as people around the world become increasingly dissatisfied with the stereotypical, monolithic office workspace. That said, the company believes it is too early to say when the process will be used commercially.

Yuka Hiyoshi, a senior industrial designer at Steelcase’s turnstone brand, is intrigued by the possibilities: “As a designer, what’s fascinating about Rapid Liquid Printing is the fine quality of the print. It’s soft, almost organic. It evokes images of brushstrokes or the branches of plants. The printing speed is very impressive. In the far future, large-scale objects could be printed in minutes rather than days. The process itself is fascinating, but the materials are unbelievable. When you see the table top, you just want to touch it.”

RLP looks hugely promising but there are, as blogger Fabaloo noted, lots of questions surrounding its development: “How strong is the material? Is it durable in the environment? Does it fade in sunlight? Can other materials be used? Or is this mix the only combination that exhibits the required properties? How thin can an extrusion be? Is there a limit whereby it is too small to be structurally viable? Could the nozzle by dynamically extended to print larger shapes?”

These are all legitimate questions and answering those - and many others - is the next task for MIT and Steelcase. To be fair to both parties, they are not making any sweeping or grandiose claims for the new process at this stage. They haven’t even put a timescale on its commercial development. Tibbits says he is convinced that, when the process matures, no other process on the market will be able to match it for speed, large-scale manufacturing capability and multi-material use. He also points out that the process can “create different thicknesses of a single object.”

Rob Poel, director of innovation at Steelcase, sounded cautiously optimistic when discussing RLP with ‘Forbes’ magazine: “There’s a long way to go before yet before it meets testing standards. We also have to look at the viability of the process and the costs associated with it. But it’s exciting and promising.”