The first six months of 2019 has seen wide-format equipment suppliers unleash a vast array of new kit at leading print trade shows like Sign and Digital UK and Fespa Global. The rationale behind launching these products differs from company to company. For some the new machines plug a hole in a portfolio, for others these products have been launched to capitalise on an emerging trend in the market. 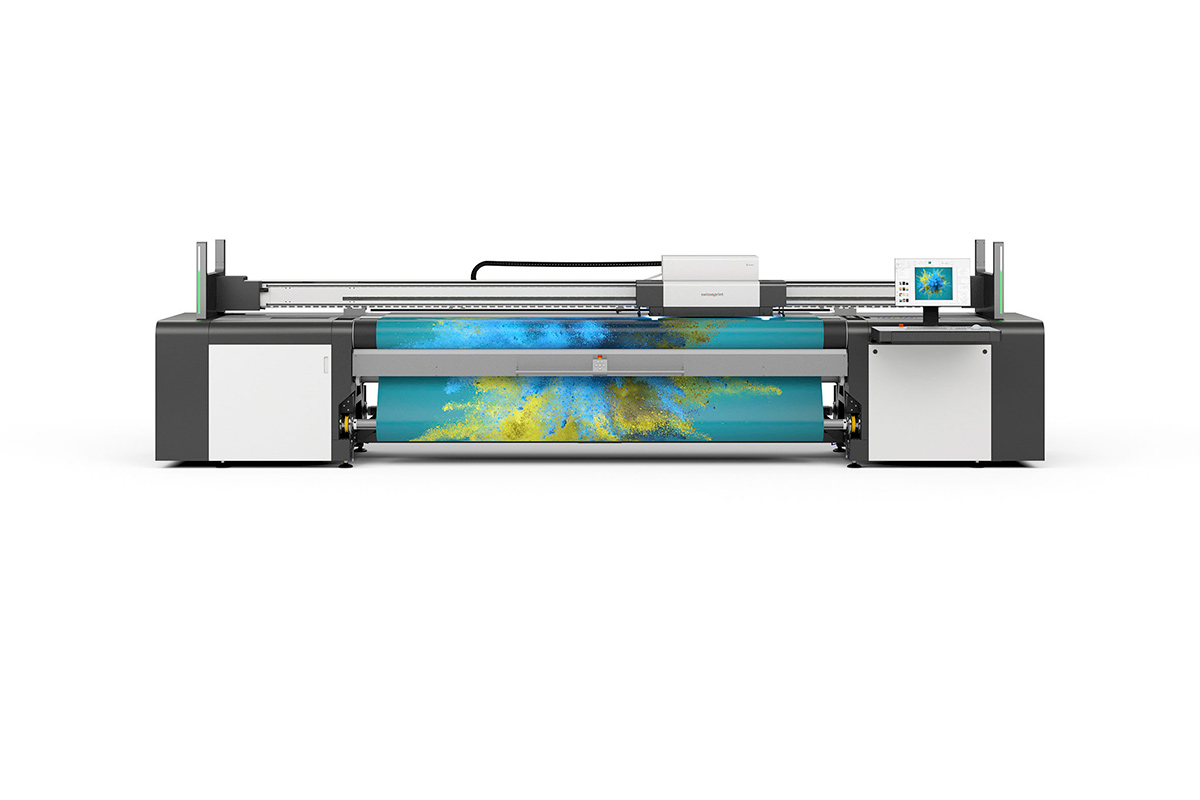 While the development rationale may differ, there are a number of commonalities between all of the different bits of NPD that has been released so far this year. Ease of use, quality, efficiency and reliability are just some of the recurring factors cited by manufacturers.

These drivers were clearly at the forefront of swissQPrint’s thinking when it unveiled its first ever roll-to-roll printer - the Karibu - at Fespa Global this past May. According to the manufacturer, the UV inkjet printer, which has a maximum print width of 3.4m, offers users high efficiency, reliability and versatility. Well, that sounds familiar…

Petra Fetting, who heads up marketing services and communication at swissQPrint, says Karibu was launched in response to customer demand for a “dedicated swissQPrint roll-to-roll printer complementing flatbed printers”. As well as being an extension to the company’s existing portfolio, Fetting adds that the Karibu capitalises on the “soft signage as a growing market” trend.

The new machine, which will be available for delivery from this September, features an NVC-free and Greenguard Gold certified ink set that has been specifically developed for the Karibu. 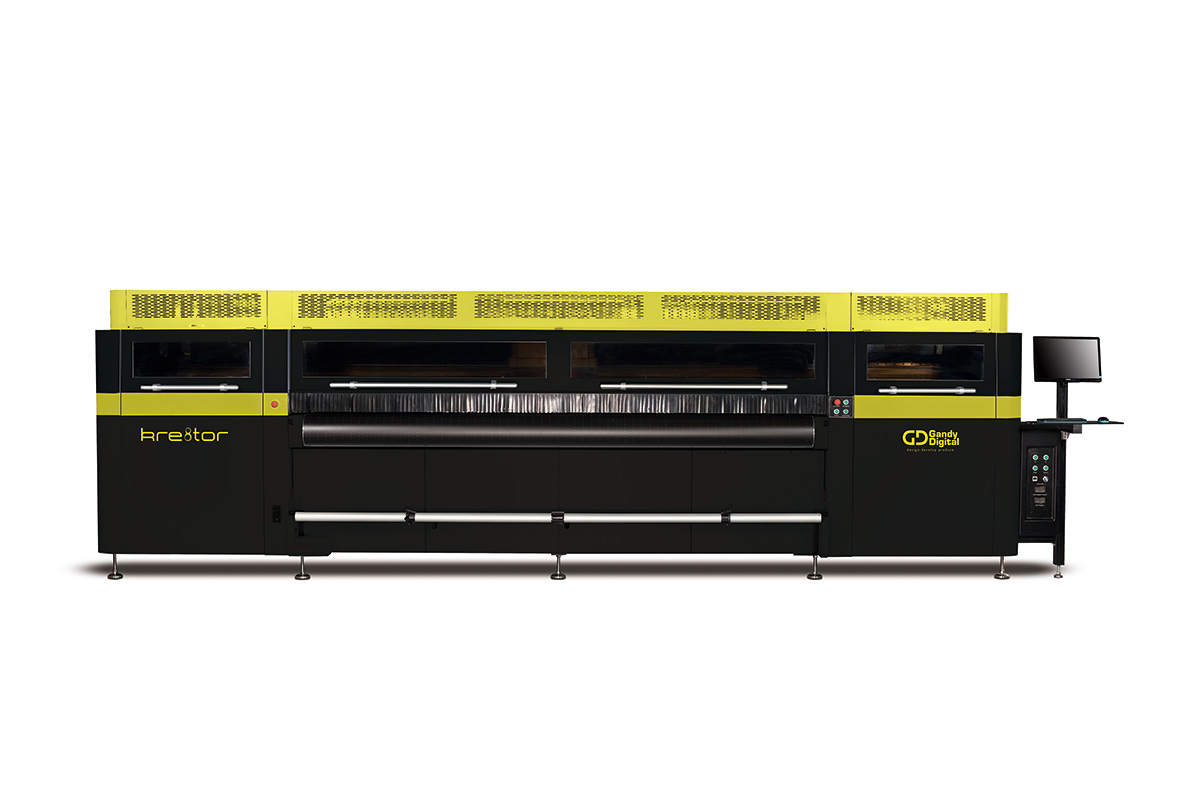 The Gladi8tor, which features NanoDot technology, was introduced after the company identified a gap in the market between very high-end products and mid-range products.

“The market is always heading towards better quality and faster speed - sometimes focusing on one or the other,” says Hary Gandy, CEO Gandy Digital. “The Kre8tor and Gladi8tor bring the next level of quality with three picoliter drop size and the ability to give smooth colours. We can finally match the quality of offset printing.”

He adds that the NanoDot technology used by the company offers “unbelievable smooth colour and sharpness combined with increased speeds of over 100 boards an hour or 60 boards for best quality”.

Ease of use and productivity gains underpin the Fespa Global launch of Ricoh’s latest machine - the direct-to-garment Ri 1000 printer.

Mimaki has also been busy on the innovation front this year unveiling the 3DFF-222 3D printer - a product co-branded with Sindoh - at Sign and Digital UK, alongside its new metallic LED UV ink, which was shown for the first time on a Mimaki UJF-7151plus at the Birmingham show in he spring.

At Fespa Global the company went one step further launching what it claimed was the “world’s first flatbed inkjet printer to offer ‘one-touch’ 2.5D texture capabilities”. 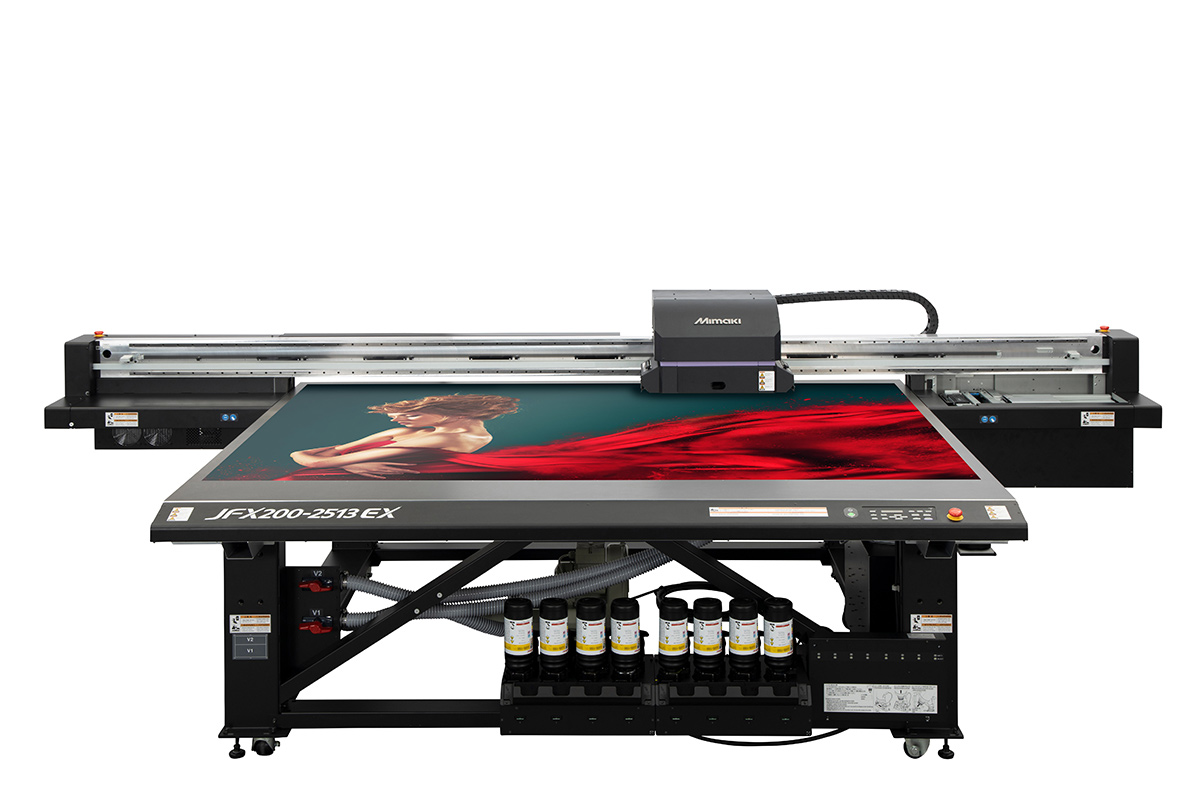 Mimaki says the JFX200-2513 EX large-format flatbed UV inkjet printer offers a substantial productivity boost over previous JFX models - the company says the machine is 280% faster in draft mode when printing in four colours plus white and 100% quicker in all other print modes. 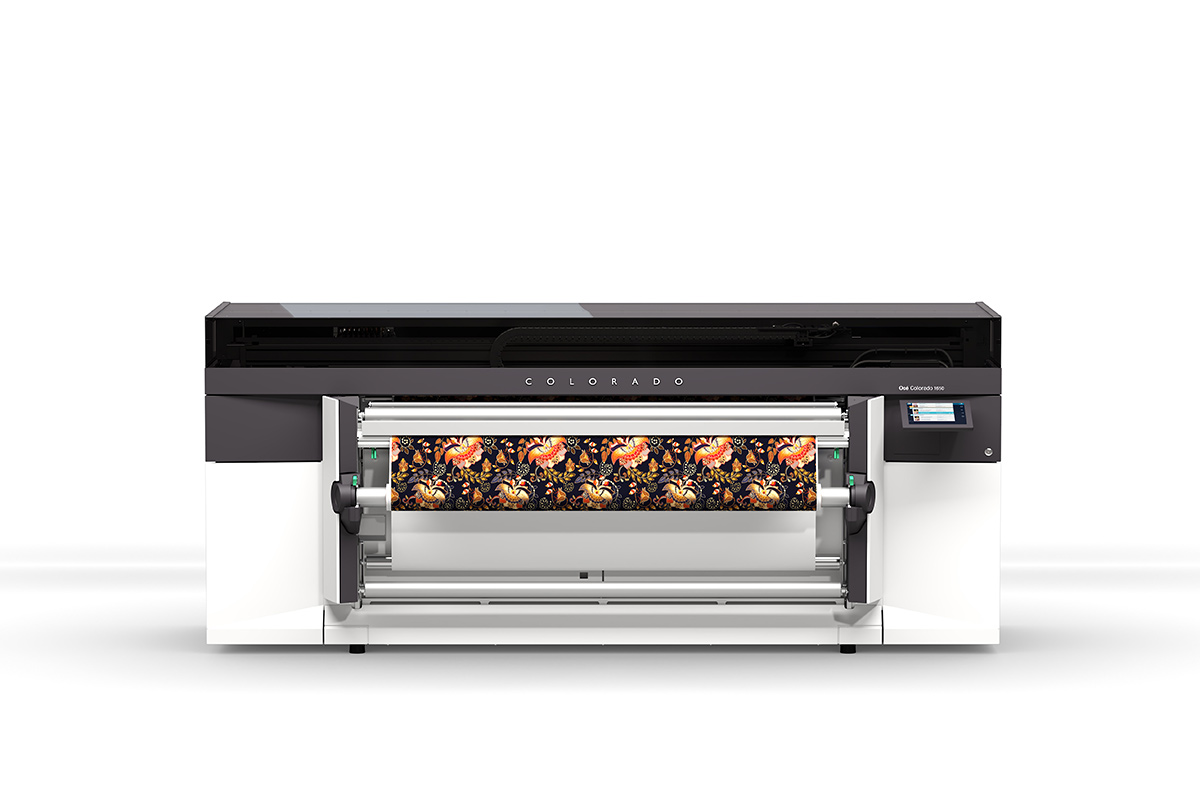 Like Mimaki, Canon unveiled new kit at both the Sign and Digital UK and Fespa Global shows. At the UK event it showed its new Océ Arizona 1300 flatbed printer series for mid-volume sign and display graphics producers, then in Germany it unveiled the 64in Océ Colorado 1650 printer.

“The Océ Colorado 1650 is the latest member of the Colorado Series and builds upon the success Océ Colorado 1640 introduced in 2017,” says Duncan Smith, director, industrial and production solutions at Canon UK. “The Colorado 1650 is a 64in true production printer, which offers low cost of ownership, while delivering high output quality, breakthrough productivity and media versatility for a wide variety of print applications,”.

He adds that the printer was launched to “help our clients deliver optimal performance to attract new customers and meet demand, but is also designed for maximum flexibility. It allows users to choose between matt and gloss print modes for each individual print to achieve aesthetic finishes, also new is the enablement of producing double-sided applications. This wide application range has been designed to give our customers more choice and versatility, while maximising quality”.

Agfa used Fespa Global to showcase its hybrid workhorse, the Jeti Tauro H3300 LED, which it claims can produce detailed UV-cured prints up to 3.3m wide at speeds of up to 453m2/hr. The company says the H3300 LED embodies: “Extreme productivity. Extreme quality,” which is Agfa’s theme for its digital printing solutions range. 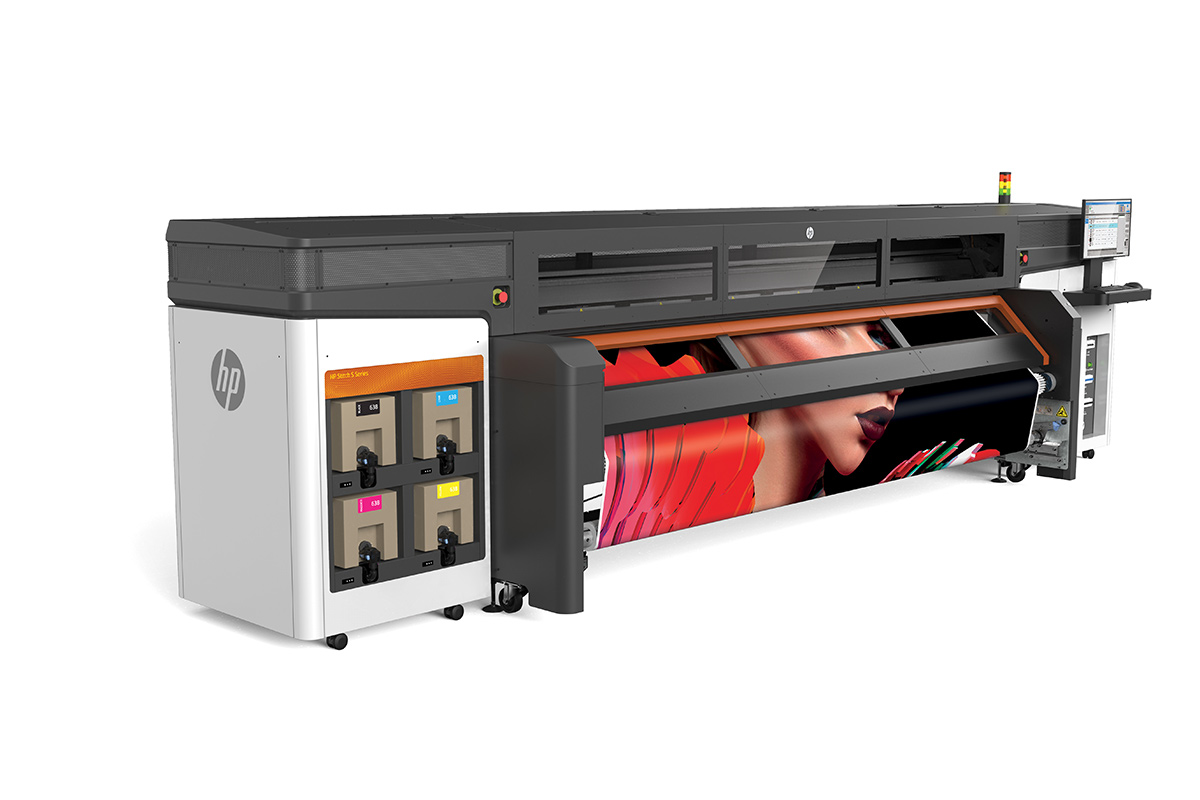 For the first time ever at a European exhibition, EFI showed off its Vutek h5 LED superwide-format hybrid roll-to-roll/flatbed inkjet printer and the EFI Vutek 3r+ LED roll-to-roll printer, as well as the EFI Vutek FabriVu 340i dye-sub printer, was developed to capitalise on the market shift towards versatile, folded soft signage.

According to Ken Hanulec, VP, marketing EFI Inkjet Solutions, there are several things PSPs are currently looking for in a printer. “Ink consumption, energy costs, speed, quality, and application variety. EFI printers are just that.” Hanulec adds: “With the LED technology, businesses save on energy costs. With a digital front-end running the engine such as the EFI Fiery proServer and Fiery XF software, ink consumption is adjusted, the production is optimsed and image quality is enhanced.”

Roland has also been busy on the innovation front in 2019 to date. As well as launching the BT-12 direct-to-garment machine at Sign and Digital UK - which has a small footprint and according to the manufacturer is easy to use - it went one step further at Fespa Global, unveiling the TrueVis VG to great fanfare.

The “next generation” in eco-solvent printer/cutters was developed based on feedback from existing Roland users, says Rob Goleniowski, head of sales, UK and , Roland DG (UK).

“There are over 40 improvements on the previous TrueVis model: some small tweaks that add up to a more efficient, higher quality machine; others - like orange ink and six-hour outgassing - that could be real game-changers for our customers’ businesses.”

“This has been developed in response to the big trend for customisation in a number of sectors, including gifts, clothing and accessories, stationery and interiors,” says Goleniowski.

In addition, Roland unveiled the DGShape LD-80 laser decorator, which adds text, images and graphics to small products, in holographic, metallic or gloss finishes and the new VersaExpress RF-640 eight-colour, which offers orange ink alongside red, green, light black and CMYK to give users “the widest colour gamut available for durable outdoor graphics”. 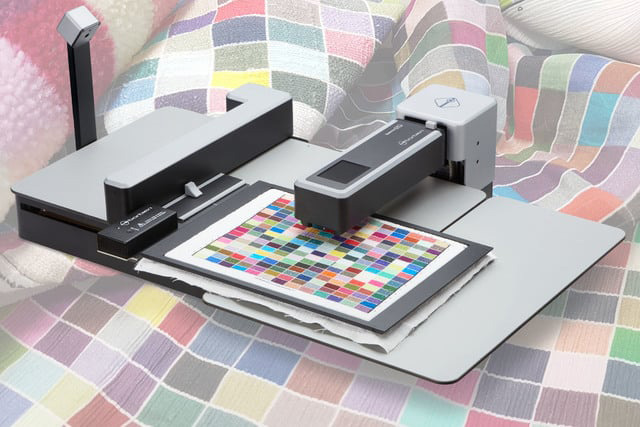 Ensuring vibrant colours are achieved time after time was the focus of Barbieri, which launched the Spectro LFP qb Textile Edition - a colour measuring device for digital textile printing. Wolfgang Passler, vice president international sales and marketing at Barbieri, says the company developed the new product because “digital textile printing is growing fast and customers [are] look[ing] for a valid solution for colour measurement.”

He adds that existing measuring devices are not suited for digital textile printing because “accuracy and repeatability [are] not good enough and [there is] no possibility to measure automatically a whole chart”. Passler claims the Spectro LFP qb Textile Edition meets these challenges.

Also rising to challenges laid down by the market is the Acuity Ultra from Fujifilm, which the company actually launched last year but made the centerpiece of its stand at Fespa Global. According to Nils Gottfried, wide-format inkjet systems product manager, Fujifilm Graphic Systems EMEA, the machine - available in 5m and 3.2m versions - was a big hit with visitors who were blown away by its sheer speed. “We can run the machine in the fast print mode of 400m2/hr, which is really fast, and we can still print really good quality,” he enthuses.

“People are really challenging us. They are coming to us with all kinds of different applications and asking ‘can you produce this or that on your machine’?” adds Gottfried.

What was perhaps most striking about the new products on display at Sign and Digital UK and Fespa Global in particular was the sheer breadth of innovation, much of which has been developed to capitalise on rapidly growing digital print markets - and potential new customer-bases for the software, kit and consulables suppliers. 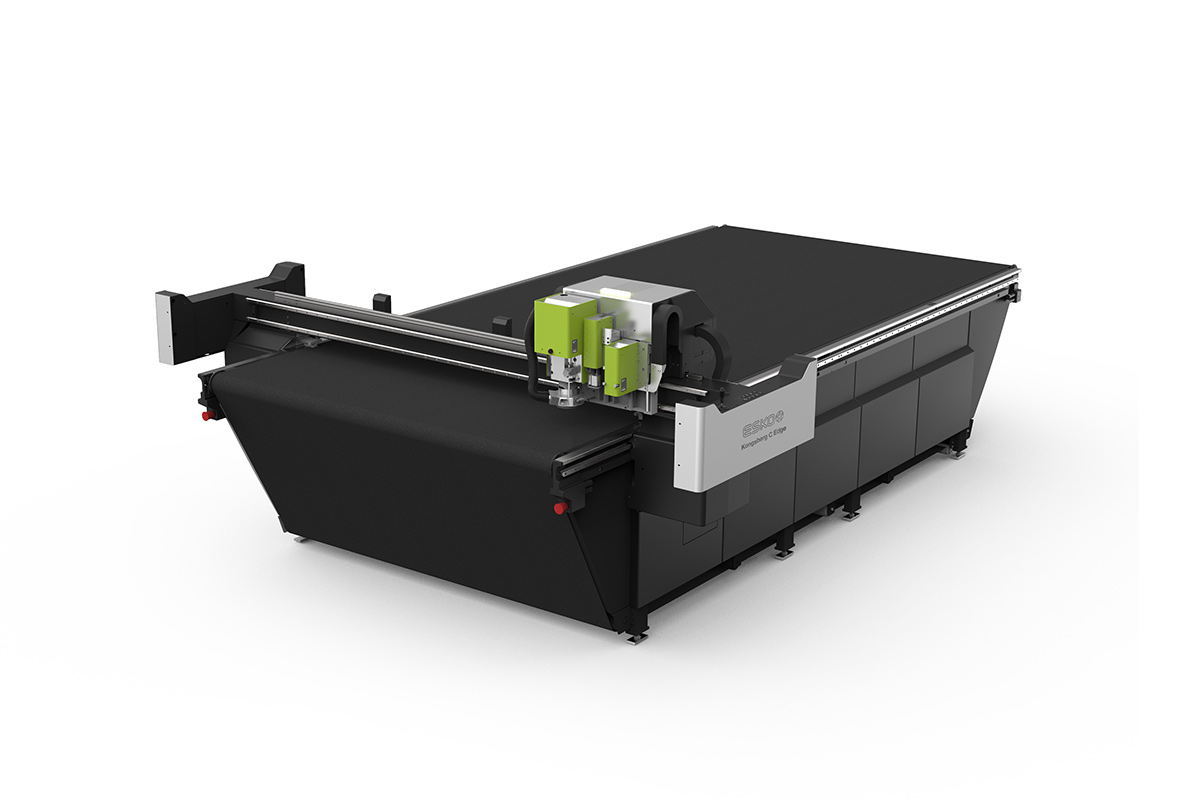 For the first time Kornit Digital showed its high-volume garment decoration printer, the Avalanche Poly Pro, which has an annual production capacity of 350,000 impressions. Blackman and White gave its new Genesis-Z multi-function cutting system - which MD Alex White claims marks a “step-change in the cutting machine market”  - its first outing, Summa debuted the 3.2m L3214 cutting system, which it claims is capable of cutting at speeds of up to 1.5m/sec, and Esko launched a new motorised roll feeder to boost productivity on its Kongsberg C64 flatbed cutter. 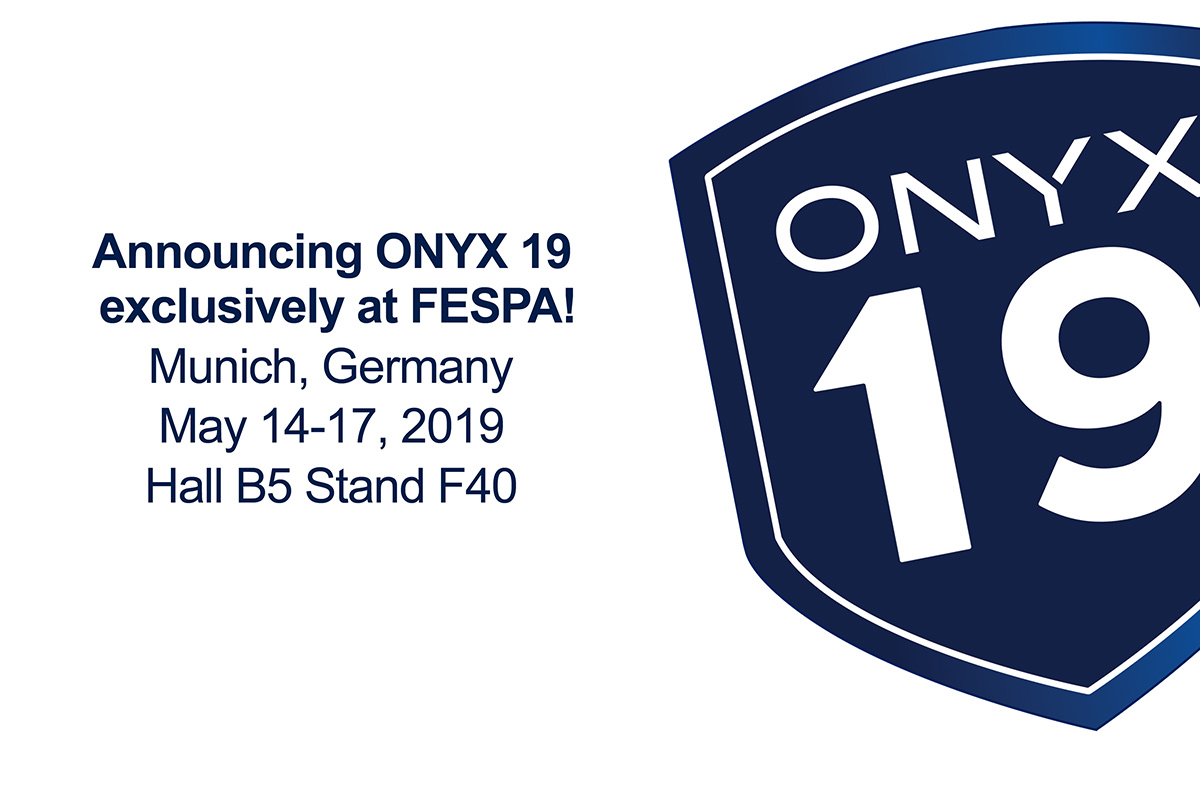 Meanwhile on the software front Adobe showed its Textile Designer plugin for Photoshop for the first time and Onyx Graphics released the latest version of its Onyx 19 wide-format workflow and Rip.

While the majority of the coverage surrounding these print trade shows understandably focused on the raft of new product launches, on their stands many of the leading manufacturers placed equal emphasis on the different applications that can be achieved on their machines. Over the coming months it’s likely that the emphasis will slowly shift from the flurry of new product launches in the first half of the year towards bedding in these devices and showcasing the wide range of different and exciting applications they are capable of producing.