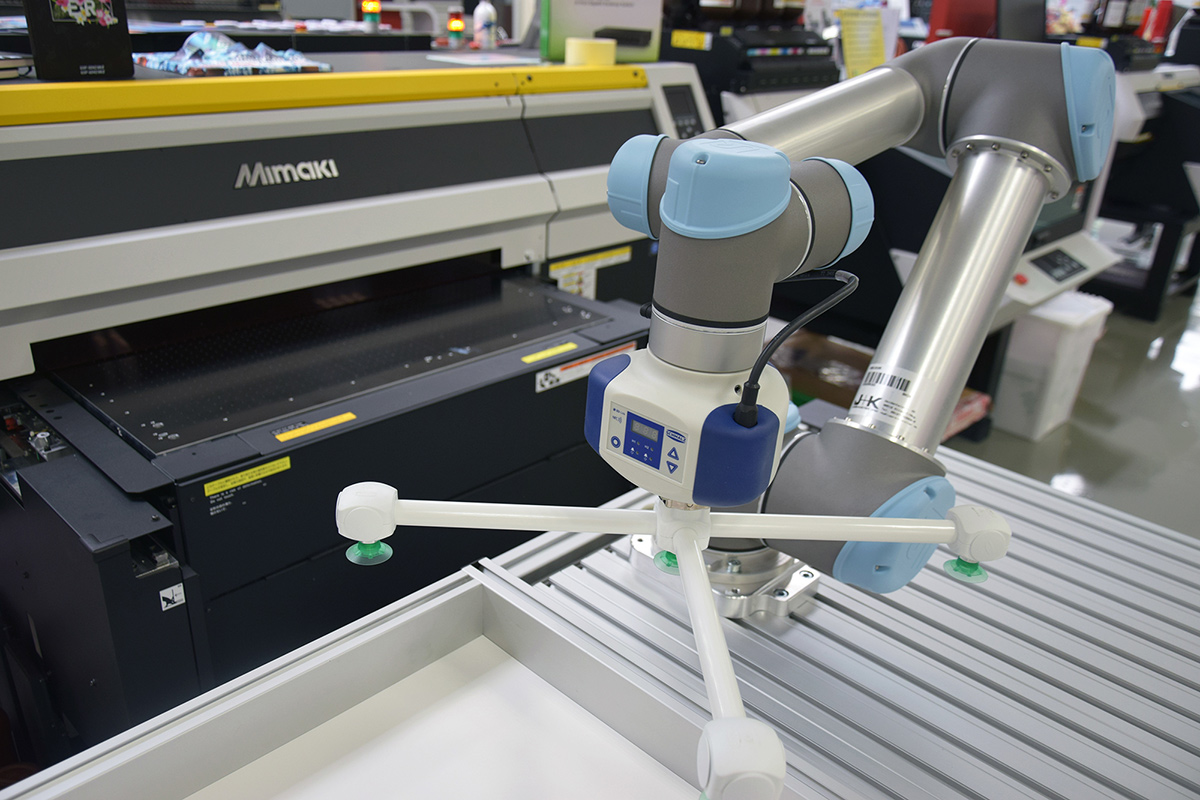 What are manufacturers doing about roboticised machine handling, and will PSPs get a good ROI from their investment in more automation?

The International Federation of Robotics (IFR) has indicated that robot sales have doubled over the past five years in industry generally, and the outlook to 2021 shows a 14% increase per year in investment, so what are printer/finishing kit manufacturers doing about it? And what kind of ROI should PSPs expect from their investment in more automated handling? Those are the two questions put to hardware manufacturers in the large-format space just ahead of Fespa Global in May. The following is what came back - you’ll see..., well, let them each put forward their views in their own words. Let’s just say that some companies are being a lot more transparent - and pro-active - than others.

The modular design of our presses allows PSPs to retrofit every single automation component at a later stage to adapt their installation to changing demands. The key is finding the right balance between automated operation and flexibility. For each step we automate, we try to ensure that we retain a manual bypass for last-minute - mostly short-run - work to be inserted into the production schedule. For instance, we have automation options on both our Jeti Tauro H2500 LED and Jeti Tauro H3300 LED, and on both presses the operator has the ability to bypass automation with a single click to load and unload sheets manually.

Another aspect considered is extending uninterrupted printing in roll-to-roll mode. For that we introduced our Master Roll-to-Roll (MRTR) option on both the Jeti Tauro H2500 LED and Jeti Tauro H3300 LED. MRTR can run in single or dual-roll mode, to a maximum weight of 700kg per roll with a rewind accuracy of less than 1mm over the full length of a roll.

In terms of ROI we see the biggest benefits in predictable production capacity. But the peripheral systems around the automation must be in place to support it. Thanks to their native integration with the Asanti workflow, all of Agfa’s wide-format presses make press operation and job/media changes simple and fast, whilst maintaining maximum up-time.

Innovation is at the heart of all we do at Durst, but currently we don’t see the need for robotics. Whereas we have seen other manufacturers use a static bed technology and have a need for robotics for automation, this is not the case for Durst. Our hybrid print devices - P5, P10, 1312 or 1330 as examples - operate with moving belt technology over a flatbed, which allows automation from start to finish. We have feeder and delivery options that allow full automation, allowing our customers to run materials from stack to stack. With our roll-to-roll machines there is the option to run unattended printing, which our customers class as the most cost-effective working shift in their production schedules.

When it comes to ROI, labour and time are the main savings with automation. Cost justification comes down to requirements - considerations of different materials and the type of application are a major factor with an investment for an automation unit.  Durst offers single, three-quarter and full automation options, enabling us to tailor solutions. Also, with our automated options, we are able to upgrade in the field.

Our LFP kit for photo, signage and textile is predominately aimed at the small to medium sized PSP so, as yet, we have not added any robotics to the printers because this would make them too expensive for the productivity gains.

However, as we spend $1.5m per day on R&D - including robotics, we will see smaller and more cost effective units coming from the Epson stable. We will also move into bigger production kit where robotic loading/finishing becomes more relevant. In terms of manufacturing we are already using robots in printhead and ink production to ensure the highest quality and consistency.

The second question we cannot yet answer.

Driving automation from design to finish is at the heart of Esko strategy. We observe a range of low value-added or heavy activities turning to robotic options. For example, in material handling throughout the print workflow, stacking or placing of products pre or post printing, as well as internal movement of product through to packing, palletising and shipping. The data capture coming back from these automation solutions also brings huge value in understanding the business, workflow and bottlenecks.

Our current view is that the penetration of robotics is fairly limited in general today in the print market. However, as labour issues impact - on US and European converters in particular - we are likely to see an acceleration of their adoption.

The International Federation of Robotics (IFR) has indicated that robot sales have doubled over the past five years in industry generally, and the outlook to 2021 shows a 14% increase per year in investment, so it’s certainly an interesting area for businesses.

Global R&D spend in the robotics industry is predicted to grow at more than 17% CAGR per annum over the next four years, according to Technavio, and a spending boom is predicted. However, the incidence of robotics still remains in the automotive, metals, electronics, medical and pharmaceutical sectors, rather than seeing wholesale growth in the print sector today.

For Esko, our success with the Kongsberg digital cutting table range and the latest launch of the Motorized Roll Feeder for soft signage applications, are indicative of the need for printers to automate and simplify heavy and/or repetitive tasks with accuracy and efficiency.

With respect to the kind of ROI PSPs should expect from their investment in automated handling, the scenario is interesting. Instead of selling robots at an upfront cost, it is likely that manufacturers will take advantage of the option to pay for a service that covers costs such as maintenance and management at an on-going rate. This switching of commercial model is likely to see increasing interest from the print sector going forward.

Automation has been around for decades in the print industry, but isn’t commonly used in conjunction with inkjet because it is typically used to produce short runs of small and medium-size jobs in a variety of format sizes on different substrates for various applications. For these types of print jobs manual printing is generally the quicker, more appropriate option. Robotics and automated material handling systems have, however, been a part of Fujifilm’s product offering for some time, as our portfolio features some very high productivity machines - such as the Inca Digital Onset X range. Our automated systems are typically used by those who need to produce larger volumes of print very fast, or those printing to heavier or more difficult-to-handle materials. Robotic systems tend to be used far more frequently in Europe and America than in the rest of the world.

The ROI on any handling system is heavily dependent on the degree of utilisation. Since robotic or automated handling systems are, in most cases, bespoke solutions, they can also contribute to the depreciation of a machine. The choice to include robots or automated handling systems is often dependent on the cost of labour within the relevant region. If labour is cheap, customers tend to work manually.  If not, they are more likely to opt for automated processes. The return on investment that can be reasonably expected from any automation investment is reliant on all of these factors.

While this is not an area that we are involved with currently, we believe there is currently some research going on along these lines in our headquarters in South Korea. However, there’s nothing we can say now.

Process automation and Internet of Things (IoT) are widely recognised as powerful tools manufacturers could be leveraging to boost efficiency in production and increase in revenue. Building on in-house R&D developments of advanced workflow automation solutions and on trusting collaborations with automation experts, the company has created a model of integrated process in UV LED printing - expected to be one of the highlights on Mimaki’s stand at Fespa Global.

Mimaki has developed advanced printing systems able to communicate with robots, as well as with a wide range of hardware, including belt conveyors, inspection devices, cutting machines. The final goal is to make it possible for PSPs to incorporate inkjet printers in fully-connected industry 4.0 production lines, leading the way to unattended on-demand production and mass customisation. This is how Mimaki sees the future of digital printing.”

In the ‘industrial product’ area on Mimaki’s stand at Fespa Global, a production line emphasised the strengths of automation in UV LED inkjet printing processes. Developed by Mimaki with the collaboration of German company Robominds, the production line featured a Mimaki UJF-7151plus, compact LED UV flatbed printer and a robotic arm made by Danish firm Universal Robots and distributed in Germany by Robominds. The robotic arm loads substrates on the printer and unloads them from the printer once the printing process is completed.

The communication and information exchange between the Mimaki’s printer and the robotic arm are enabled by an IoT-based interface, implemented for the UJF series by Mimaki. At the heart of the IoT automation demonstration is the Mimaki Job Controller proprietary software, designed to automatically connect a printer and a robot in a production line.

The robotic arm from Robominds is of a modular design which makes it suitable for all kinds of printed products. Enabling four different movements, it is equipped with suction parts which enable it to handle different substrates.

Obviously inside of our wide-format printers we are building automation features for improving quality, keeping print quality at a constant level and accommodating more media types.

We also have automated and motorised winding and unwinding systems in our roll-to-roll devices. We have automated print-and-cut workflow features in our printers, but we currently have no ‘robotic’ features in our printers.  The main reason is that the performance of the printers in function of the target public and the target volume would not justify robotics integration of for ROI reasons.

We have been concentrating our forces on improving our printers and developing our first roll-to-roll printer, Karibu, so in terms of robotics not a lot has changed since the interview Image Reports conducted with our CEO Reto Eicher back in 2017.

Yes, we are convinced that robotics is suitable for the graphics market - provided that a print provider has a sufficient amount of repetitive work. Whenever we demonstrate ‘Rob’ - our robotic arm - people are amazed by the flexible utilisation and the perfect integration into the printer’s control system and the workflow. Nevertheless, it seems that users are not quite ready to introduce automation in their own print shops yet.

To us, Rob is a starting point. By presenting this robot we have sent a signal. We will be ready when automation really catches. In fact, we have had first industrial projects involving heavy-duty robots that we integrated. For instance in the glass and metal industry where panels would be too heavy to be handled by staff.

Robotics has been a buzzword for some time but now we are really starting to see more manufacturers incorporating robotics into turnkey solutions. Automation is becoming more important so we are seeing an increase in projects that include fully automated robotic arms working in unison with print and finishing equipment.

It’s very hard to put a figure on ROI as end-users of this technology will see benefits that include freeing their operators for other tasks in the business, a reduction in errors and downtime on long-run jobs, and the ability to run the machine(s) with a skeleton staff, so production can continue overnight for example.