What significant technical developments and trends were seen in large-format printers at Fespa and Sign and Digital UK? Richard Stuart-Turner reports.

Fespa 2017 ran for five days at the Hamburg Messe in Germany last month and saw many of the major printer manufacturers filling the ten halls with not only new kit, but a confidence that their latest products could move the industry forward in some way. Encompassing digital large-format, screen and textile print, the international exhibition opened its doors less than six weeks after one of the UK's biggest annual large-format events - Sign and Digital UK – ran at Birmingham's NEC.

While many of those exhibiting at both shows were holding new launches back for Fespa, some manufacturers used the UK event as an opportunity to preview and drum up interest in some of the technologies they would show in Hamburg.

Mark Lawn, director of the graphic and communications group at Canon Europe, says there was a good synergy between the two shows, with some of the Fespa signings for the company's new Océ Colorado 1640 - the first printer to feature its new UVgel waterless ink technology - being to UK customers that Canon had first discussed the technology with at Sign and Digital UK.

Indeed, Lawn says Canon achieved more than 100 sales of the Colorado 1640 at Fespa, around 10-15% of which went to UK customers. The machine will start to ship in the second half of June.

“We believed that we had a game-changing technology with the UVgel and the response that we had from customers and resellers alike at Fespa was superb and way beyond our expectations,” says Lawn, who anticipates the technology will appeal to PSPs in need of greater productivity, such as those dealing with same-day turnarounds.

UVgel is a low-heat process using LED curing that is said to cut ink consumption by up to 40% compared with eco-solvent and latex printing. It instantly gels on contact with the substrate, resulting in a precisely positioned dot with minimal gain.

The 1.6m-wide four-colour roll-to-roll Colorado 1640 can reach speeds up to 159m2/hr, or 40m2/hr in best quality mode. The machine features a dual-roll configuration, which Canon says enables PSPs to switch between two types and sizes of media on the fly.

“UVgel is low heat and without water so reduces media swelling and enables great performance on applications that need tiling and alignment, such as wallpaper. The printed output is odourless so great for fast, high quality indoor applications on a wide variety of media. The print is also durable, lightfast and abrasion resistant so suitable for outdoor applications,” says Lawn 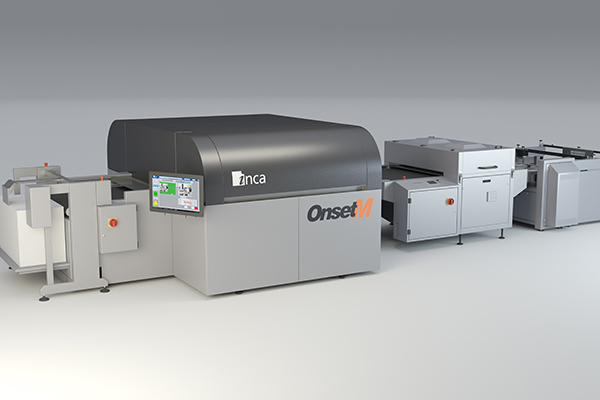 UVgel was not the only technology seen at Fespa that brought something completely new to the table. Just prior to the show Inca Digital announced the launch of its new B1 inkjet printer, the Onset M. The eight channel machine, which is expected to be commercially available from around September, is built on the same platform as the manufacturer's Onset X series and SpyderX and uses Fujifilm inks and Dimatix 7ng printheads.

The press will also be marketed and sold separately under a different name by Fujifilm, which was showing a fully-automated model running on its Fespa stand.

Inca says the Onset M, which can print on substrates ranging from thin papers to plastics, acrylics, glass and sheet metal up to 10mm thick , can be used by large-format PSPs producing high quality, on-demand short-run work such as POP, as well as commercial printers looking to print B1 on difficult substrates or materials too thick to be printed on using their offset machinery.

Versions of the Onset M with various levels of automation will be available, ranging from manual and three-quarter automation through to the fully-automated option complete with feeder and stacker that the manufacturer says should cost just under $500,000 (£385,000).

“If you look at the standard POP market, on a mid-range machine where you're doing multiple-up of small formats, you spend more time pushing the substrate on and off than you do printing, and the economics of those are dominated by labour costs,” says Inca Digital chief executive John Mills, who believes there is a big market space for machines such as the Onset M.

“A lot of the POP guys currently outsource short-run litho to other people because they don't have the ability, and they were saying that this is a product that could fit within their current business and enable them to stop having to outsource that type of work.”

Another Fespa standout was Veika's latest version of its Dimense technology, which adds custom height up to 1mm to prints by embossing and digitally printing simultaneously, without the need for a print cylinder. This enables users to print non-repetitive and unique wallpaper.

The company was showing this technology off on its 1.6m-wide Dimensor Model S printer, which was first seen at Drupa last year, but it also used Fespa to map out its future plans for a larger family of machines that will utilise the technology

If one of Fespa's dominant trends this year, then, was the feeling that some manufacturers were really looking to push the envelope in some way with products unlike anything else on the market, one of the other big talking points was the continued growth of digital textile printing.

We looked in depth at this market back in the March issue, and at the time were assured by manufacturers that we would see some major launches in Hamburg. This indeed proved to be the case as there were some very interesting new textile developments at the show. 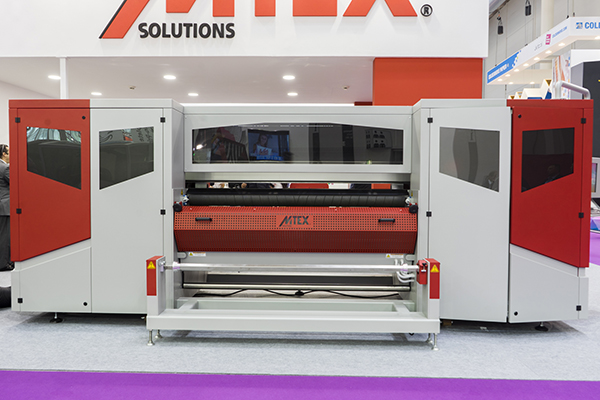 The 1.9m-wide roll-to-roll Dragon has eight heads and is available in either four or eight colours. This machine, which can print up to 137m2/hr, is compatible with a wide range of inks and is aimed at the sign, display graphics and interior décor markets.

The Scorpion is a 1.9m-wide printer with the option of roll-to-roll or adhesive belt for stretched or knitted fabrics. Available with either 16 or 32 heads and four or eight colours, this device is aimed primarily at the high-end fashion markets and is available with acid/pigment or reactive ink dyes with speeds of up to 550m2/hr.

The 3.2m-wide Eagle also has the option of roll-to-roll or adhesive belt for stretched or knitted fabrics. This printer is predominantly aimed at the display graphics and home textiles markets for disperse or pigment inks with speeds of up to 543m2/hr

All three machines are modular and will be commercially available in the next two months. MTEX director Stewart Bell says: “These are our future generation of machines. We built them completely in-house ourselves and they all use Panasonic printheads.

“Our ink pricing is also very aggressive and we will be unbeatable on that in the market. We use MTEX inks that are made in Japan and testified and certified by Panasonic.”

Other notable textile launches at Fespa included EFI's new Reggiani Renoir Flexy, a 1.8m-wide printer with eight printheads and a production speed of more than 400m2/hr with a resolution of up to 2,400dpi. The manufacturer says this machine can handle a wide variety of fabrics, from knitted to woven as well as low- and high-stretchable materials.

ATPColor, meanwhile, debuted what it claims is the world’s first 5.3m-wide grand-format textile printer with integrated inline fixation – making it a one-step machine that eliminates the need to load and unload both the printer and the calendar.

Mimaki's big Fespa news was the unveiling of its new 3D printer based on its UV technology, currently known as the 3DUJ-P. But the manufacturer also placed a major focus on its textile machinery, with one of its two stands dedicated entirely to this area.

Back at Sign and Digital UK in March, Mimaki had shown its new TX300P-1800 direct-to-textile printer in the UK for the first time. This 1.8m-wide device, which is suitable for producing short-run fashion, furnishings or soft signage on thick and woven, natural or man-made textiles, also formed part of the company's Fespa line-up alongside kit including the recently launched Tiger-1800B direct-to-textile industrial printer. 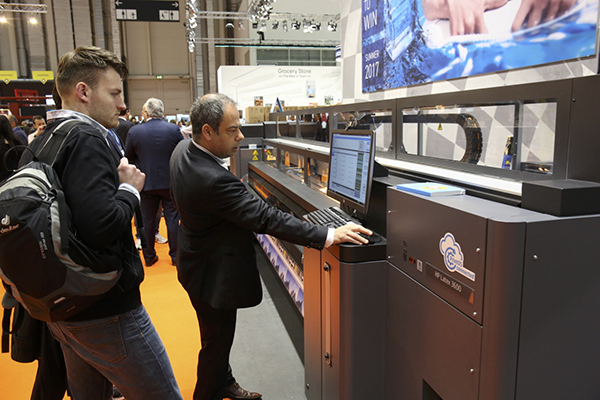 HP's Fespa stand was packed full of new and upgraded offerings, with notable show launches including the 3.2m-wide Latex 3600 and 3200 printers, which replace the 3500 and 3100 models respectively.

The productivity of the machines, which can print at up to 180m2/hr, has been boosted by new features including a special tiling mode, which is said to offer full colour consistency for demanding jobs, and reduced media waste when using the HP Latex Media Saver.

“We've also made these machines more robust and we have worked to enable users to run up to four of these machines with one operator,” says HP Graphics Solutions Business EMEA head of marketing Michael Smetana. 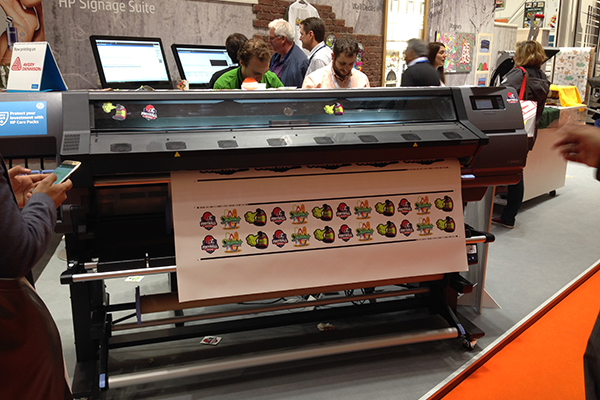 The company also showed its new 1.37m-wide Latex 315 and 1.6m-wide Latex 335 print-and-cut systems for the first time in Europe at Fespa. These dual-device machines offer simultaneous printing and cutting in a single workflow.

“We have brought to the market an integrated solution from a hardware and software perspective where you don't have to worry about two different software versions or how to put things together - it's very well connected,” says Smetana, who adds HP decided to offer a dual system instead of an integrated single device to maximise productivity.

“With an integrated single device you cannot print while you cut and you lose 50% productivity. That said, integration has been popular in the past because it takes up less space. So our printer and cutter are very tightly connected to each other - the cutter is a very slim model just behind the printer.”

Also interesting on HP's booth was the introduction of the PrintOS cloud-based operating system to its Latex and Scitex printers. “Customers who run a Latex, a Scitex and an Indigo appreciate having one solution that will fit to more HP platforms,” says Smetana.

“PrintOS allows you to monitor your printers to maximise your outcome and minimise your downtime because you're getting regular alerts, which gives more preventative maintenance.” 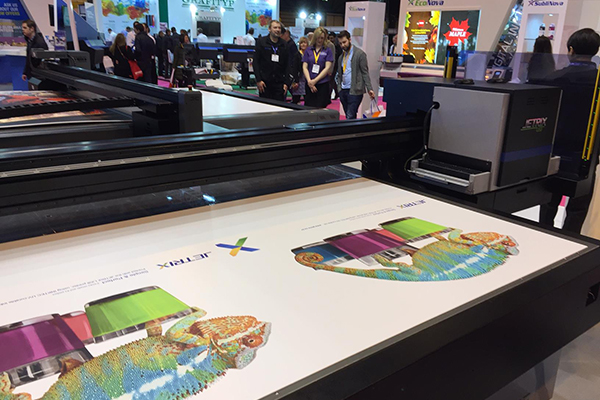 One of Sign and Digital UK's major launches, which was subsequently shown at Fespa in its final version, was InkTec's new LED-UV flatbed printer, the Jetrix LXi8. This machine can print at up to 206m2/hr at a top resolution of 1,080 x 720dpi.

The LXi8 can be used for applications including short-term outdoor signage, interior decoration, wood prints, clear film window graphics and industrial applications. Up to seven layers can be printed to create 3D effects. InkTec anticipates the device, which can handle rigid media in formats up to 3.2 x 2.03m and 100mm thick, will become its flagship machine.

One of the options available for this printer is white. InkTec Europe managing director Joey Kim admits that “signmakers printing onto paper so don't necessarily have a use for white”, but – as is the case with many of the latest UV flatbeds – it's good to know that the option is there if you need it.

Another interesting theme to come out of both Fespa and Sign and Digital UK is the amount of new machinery with automated handling as a major focus. While automation is constantly being talked up as the next big thing in print, for many large-format PSPs – small businesses in particular – it is likely to be some way off before having high levels of automation becomes realistic or commonplace.

Automated handling can in many circumstances prove very useful but there is often a significant additional cost to having these features, which raises some questions - where does handling begin to pay for itself, and what level of machine would you need to make automation feasible? These questions will no doubt start to be answered over the next few years, as such automated features are more heavily developed and adopted.