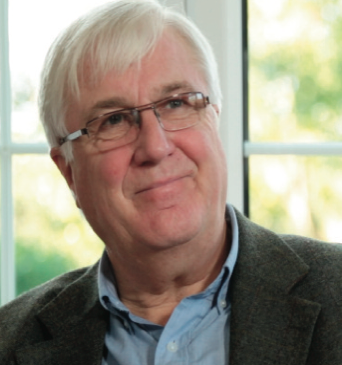 Because wide-format print output is often not paper–based, its producers tend to feel sidelined when it comes to organisations like Two Sides waving the flag for print per se. So Lesley Simpson, Editor of Image Reports, met with Martyn Eustace, director of Two Sides UK and of Print Power, to ask whether these organisations can, and do, represent the interests of the wide-format print sector as part of the overall remit to put print back firmly on the marketing communications map.

First up, can you tell us a bit about Two Sides and Print Power, and the relationship between them?

It all started in 2008 with a campaign called ‘Two Sides’ which began because the paper merchants in the UK were getting fed-up with messaging that print and paper were bad, destroying the rain forest etc. So they said, ‘why don’t we do something about it?’ So we started off with a small campaign but that was quickly joined by paper makers, printers, equipment manufacturers – and it has grown since then so it now has a voice in all European countries and on a number of other continents as well. We have a campaign that has grown very fast because it’s needed – we need to get across the positive message that paper and print are environmentally sustainable media – and it's the responsibility of all sectors of the industry to join together to do that. So that’s Two Sides.

Both organisations do a terrific job improving the profile print as an attractive and sustainable communications medium. But, wide-format applications don’t get much of a look in. Why is that?

Actually, I don’t know. I suppose it is because the medium of wide-format is so varied. It includes paper – that is very important, but there are so many other substrates. And I don’t think there’s such an impact from people switching from it to other digital formats. I’m sure it’s there, but not quite so much as with other areas of print.

The environmental argument is probably still as powerful and yet when people look at a poster I don’t think they are as aware of the environmental considerations as they are when they pick up a book or magazine. I suspect the argument is still valid, the need is still there and there’s no reason why we shouldn’t embrace the argument for wide-format print – and I think we do in many ways – but it hasn’t been a central focus for us, that’s for sure.

As we conduct this interview, you’re freshly back from the Two Sides and Print Power Autumn Seminar in London. The theme there was: ‘Promoting the sustainability and effectiveness of print media in a multi-media world’. With hindsight, could/should there have been more of a focus on wide-format as part of that mix?

I suppose so. But what we were trying to do at this conference, was make people aware of what’s going on in the multi-media world. It wasn’t a pro direct mail or pro advertising in magazines type message - it wasn’t even focusing wholly on print. We had some wonderful presentations on digital print, on photo books etc., but we also had some fabulous presentations on optimising your website, on digital media and where it’s affecting our industry.

The purpose of the event was to make the members of Two Sides and Print Power aware of what’s going on in the multi-media world, and of course wide-format is part of the mix and yeah, we could have done something there, but as I say, it wasn’t the objective to have just a pro-print seminar because all the people there are pro-print anyway!

Members want to know more about multi-media – and how they fit in it. And how they should equip themselves to succeed in it. I think there’s still a view that print is sold on its production benefits. You know the argument: ‘I’ve got a glossier, faster, whatever it is... machine’. But the buyers are increasingly asking ‘what will this print piece do for my campaign?’ and we need to equip ourselves to talk knowledgeably with clients about why print should be part of their multi- media strategy.

What do you think wide-format needs to do then to have a louder voice when it comes to it being a viable consideration in the comms mix?

?Firstly - and I’m not a wide-format expert – I’d ask myself what are the alternatives to what I produce, what is the competitive market in which wide-format exists? What are the budget decisions being made that will make them choose wide-format or not? Where are the opportunities to grow business? And of course then, fundamental to all print, is having the facts, the case studies, the methods to show clients that if they go down the route of wide-format they can expect to receive certain benefits, and these benefits have got to be measured as ROI.

I think print is relatively expensive compared to digital, and therefore we have to prove that if a client puts £1,000 in they will get £1,500, £20,000 - whatever it is - out again. So it’s imperative to know your marketplace and understand how to sell the benefits. It’s the same process for all the print channels.

Going forward, is there a way Two Sides and/or Print Power can help better position wide-format??We’ve been talking to Fespa for a long time and I think they are going to join because they see the value of what we’re doing, and I would welcome their involvement because a lot of those who provide wide- format print feel close to that organisation and there’s a lot of expertise that we could benefit from.

Print Power has its own magazine and it looks at all e different channels where print is active. We look at direct mail, magazines etc – there’s no reason why wide-format shouldn’t be in there given that brand owners use it as part of their campaigns. I have no problem with including wide-format, but I suppose we haven’t had pressure from that sector to be involved. But it seems perfectly valid that we become so.

At Cross Media you alluded to a Print Power online, shared resource of case studies. Can you say more about that and its relevance to wide-format?

Undoubtedly, there’s scope for wide-format within this new resource. There’s a common theme to most of the meetings and events I go to, where people are acknowledging that print ROI is really difficult to prove. We’ve sat in on meetings with creatives, marketers and brand people and interviewed them at Print Power ourselves, done surveys, had them come to speak at seminars etc., and they all say ‘give us the proof of why we should use more print. We shouldn’t have to go out and find the information, you should be telling us.’

OK. So we brought together a whole bunch of people including the DMA, BPIF, paper merchants, printers etc. earlier this year and explained that Print Power intended to build a case-study platform that is online and interactive. So if you’re a printer going to see a client tomorrow and you want more information on what the ROI is likely to be of a certain type of print job, or you’re a brand owner considering using print media, you can go to this resource and download lots of information, slides etc., and everyone was really excited by the idea; everyone was behind it, accepting that the industry needs to share better for common benefit.

If we’re all out there with the right tools selling the benefits of print it will add up to so much more than one or two enlightened PSPs going out and trying to do that job. But the biggest problem, after the initial enthusiasm, has been to get people to upload information!

We would welcome wide-format as one of the channels which should be promoted, and love to have case-studies that tell people all about the power of wide-format – it should become one of those print channels which we give all the evidence about how it works within a cross media world.