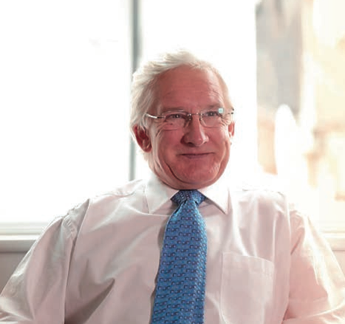 Dr Colin Thompson has a string of letters after his name and has over 30 years experience as a managing director in various companies where he’s gained experience of increasing sales and profit, rebranding and mergers/takeovers.

He’s now widely recognised as the managing partner at business development company Cavendish, though he’s also a visiting professor and mentor at Coventry University and sits on various boards. So what can we learn from this business coach, keynote speaker and author? Lesley Simpson, editor of Image Reports, speaks to Dr Colin Thompson in this Talking Point interview.

Cavendish’s marketing says it provides specific and practical help in putting together strategies that develop growth. Do many print companies employ you to do this?

A few do - and I say a few because a lot of people think that the solutions we offer might hurt them rather than help them at the end of the day. It’s the medium to large sized companies that mainly take our services. Most of those companies are led by business people not by print people. Print people tend to think you have to be a printer and know everything about printing to help them! We at Cavendish do know about printing, but we’re not print people. We have worked in the industry for nearly 40 years, but we are business people – we help people with business models to make them more profit.

So yes, we deal with a few print companies globally, fewer perhaps than we’d like to, but we work across many sectors and find that the print sector is reluctant to take on consultants.

Are those that do of a certain ilk?

Yes, they are a certain breed. Most of them are businesspeople who just happen to be in the print industry - they have a business brain. Everything is led my business models, margins etc. Printers who have had the company passed on to them or started their own company because they have a print background, don’t often know what their margins are from day-to-day, maybe just year-to-year when they see their accountant. That is the big difference between the two.

What we’re finding now, is that with margins very tight globally, that the business edge is more prominent. A lot of companies in the print industry have gone out of business because they don’t look at the business model first, they look at what they print and that should be the secondary thing.

It is widely believed that there’s a reticence among managers to ask for outside help because they think it’s an indication of their own failure? Is that attitude more prevalent in print than in other industry sectors?

I’d say it’s a fear factor in all sectors. I can specify in print more, because I have worked in the print industry myself, and unfortunately most managers fear anything from the outside because they’ve never been outside – have never worked outside the print industry! The biggest danger is that they don’t take outside things on board because of this fear. That’s what’s going to destroy them at the end of the day.

What about the cost and confusion facing print companies thinking about employing a ‘business growth’ mentor? Is there a shortcut to finding the right person at the right price?

This is a key issue. But I don’t like to look at anything I do as a cost – it’s an investment. People invest in our skills to develop for them a better bottom line. Therefore there is no cost. The cost they think they’ve got to pay out is actually paid for by the increase in that bottom line.

Are there grants or funding awards for companies wanting to go this route??

No, there are no grants for businesses wanting to bring in someone to help them raise their bottom line - and there shouldn’t be. Going back to what I’ve said before, people have got to get out of their mind this idea of cost. It should be looked at as an investment, as you would an investment in a machine. You are simply investing in people to give you a return rather than hardware. If a company is adamant that we are a cost we’ll walk away, because it shows a certain mindset.

What about the level of time commitment required of business owners working with someone like yourself to develop and implement growth strategies. Obviously they will vary enormously given all the variables, but can you provide some sort of baseline measure?

Whatever the size of company we will always do a three-day survey from working within the company – not just talking to the directors – so that we get a proper idea of how the business operates. After that we’ll go through what we believe are the necessary changes for them to achieve a better bottom line.

It’s important that we see the business with our own eyes, and not how the owners/managers may perhaps see it, because their perception can be totally different from reality. So we do insist on this working day three- day study as a prerequisite to working with anyone.

Most companies think we’ll pick up on problems – mostly they haven’t got problems, they’re issues. And those can be dealt with.

When it comes to what we charge, which we keep reiterating is not a cost but an investment, it’s not overboard – that three-day consultancy consignment and full report on what we see as the main issues within their company will be charged at £2,000. And anyway, why should they worry what our fee is if it’s going to be paid for by how we help them increase that all- important bottom line. We guarantee that what we suggest will cover our fees over a set length of time.

What about self help? There is so much management strategy information that perhaps it’s overwhelming. Are there three ‘must digest’ guides – and what’s so special about them?

Well Cavendish has a very active website which gives lots of information that’s free - because we believe in sharing information – but we also issue newsletters every week on different topics to help our members.

Other areas companies could look to are associations, much of which offer free advice, but because of the Web you can actually look anywhere for help. The world is their oyster.

But isn’t that part of the problem – that there’s almost too much information to get to grips with??

There is information overload, what with websites, webinars, bookshops etc. And often people don’t really know what they’re looking for. Unless you do know it becomes a needle in a haystack situation. There’s got to be focus and clarity on what they want to achieve, not a look at all that’s available because there’s so much. Until you know what your requirement actually are, why look for anything?

From your time mentoring businesses, what do you see as the main stumbling blocks to companies achieving their potential??

In all sectors, the stumbling block is having the wrong attitude – having a negative rather than a positive attitude - and being fearful of anyone from the ‘outside’ because they think they’re going to be told that what they’re doing is wrong. It’s a lack of confidence at the end of the day, and that fear means many of them would rather go out of business than call for help. So I’d say people’s own attitudes are the biggest stumbling block.

What have those that succeed got to teach us?

That there’s something valuable to be had from sharing information. People like me have worked in various companies and taken lessons from one to another because we’ve seen things in a different way. I myself am a business person within the print industry. And it’s a great industry but the unfortunate thing about it is a lack of shared views – and of open-mindedness.

The qualities of those print company managers that have been successful is that they are open minded; they have geared themselves up to want to take new things on board, and they’ve also written a strategy plan, and they’ve realised they can’t do it all themselves. They’ve taken away the pressure from themselves, and diluted responsibility down the line. Then those other people become hungry to learn. Making everyone more responsible and accountable for what they do is therefore a major point in their success.

One of the biggest issues is that company owners have learned to work in the business rather than on the business.

Is there anything we can learn here in the UK from how businesses operate elsewhere?

?If you look at other parts of the world, America, Asia, they share information quite readily because everyone involved wants to improve. And they tend to be better educated business people, looking at their margins all the while. Those in the UK print industry need to learn these lessons, otherwise there’s just one way to go – and that’s out of business.

An edited version of this interview can be seen as a video clip.

Ensuring a future after furlough